A Butterfly Found in a Very Old Book 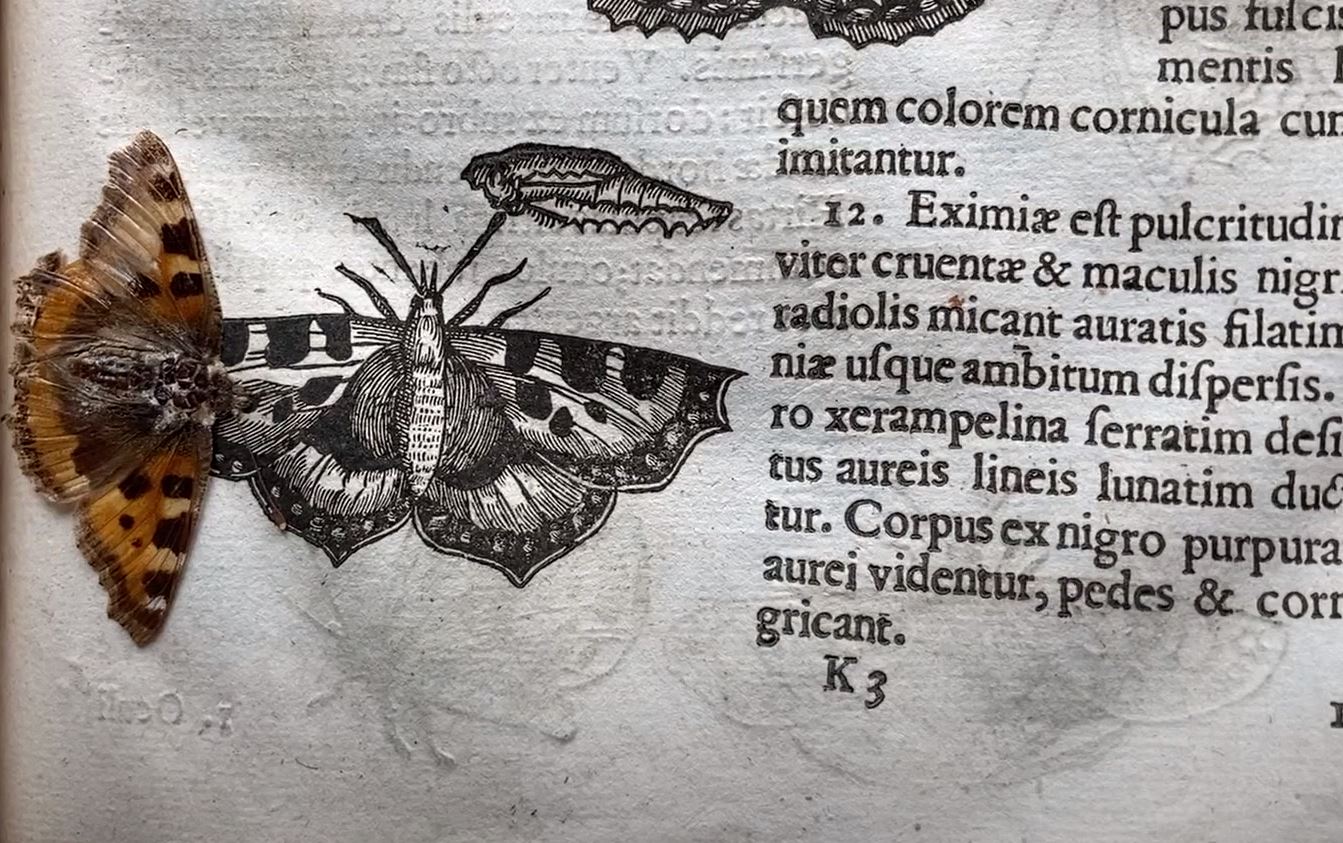 The colorful butterfly pressed in the book (image taken from Trinity Hall video).

Jenni Lecky-Thompson, Head of Library Services at Cambridge University's Trinity Hall, made an unexpected discovery within the pages of a very old book. She found a butterfly. It had been pressed within a book about insects, Insectorum sive Minimorum Animalium Theatrum (the theater of insects or small animals), published in 1634. It is unknown when the butterfly was pressed in the book. It could have been anytime between the date of publication and when it was given to the library in the 1990s. We suspect it goes back a long time but no one is certain.

The book, like the butterfly, has a long history, one which is a bit convoluted. The book was started by Conrad Gessner, but was unfinished when he died in 1565. His papers, including the manuscript for this book, was purchased by his assistant, Thomas Penny. Penny then acquired the notes of Edward Wotten and began combining the two texts. However, he too died, in 1589, with the book uncompleted. It then passed to his friend, Thomas Moffet, who enlarged and completed the book. Unfortunately, negotiations for its publication fell through and the book remained unpublished when Moffet died in 1604. The manuscript remained with the Moffet family for many years until finally sold to French physician Théodore Turquet de Mayerne. He finally succeeded in having the book published in 1634. Gessner, Wotten, Penny, and Moffet are all credited on the title page. Despite it taking almost a century to be published, it is still the first English book about insects.

We can't tell you much about the history of this particular copy. It was published in 1634 and we next pick it up sometime in the twentieth century. That is when it came into the possession of Lawrence Strangman. He was an undergraduate at Trinity Hall from 1925-1928. The Trinity Hall website tells us, “He was a passionate book collector who put together an eclectic collection of antiquarian books. His interests were wide-ranging, taking in early books on natural history, travel, 19th century English novels, the classics, twentieth century humour, private press books and much more besides.” Among that eclectic mix you will notice early books on natural history, so this book fit in his collection. Strangman died in 1980. His collection was later given to Trinity Hall by his family, presented by his niece, Geraldine Essayan, in 1996 in his memory.

As to when this butterfly was pressed in the book, no one knows, but we think it unlikely Strangman did it. He was an antiquarian book collector, and that is not something most collectors would do with their books. Collectors are preservationists, but of books, not of foreign objects which might affect the books. Indeed, it would seem that this book probably went from being used as a source of scientific knowledge to a collectible object long ago, measured in centuries. The butterfly was impressed in the pages that depict its species, a sign that it was placed inside to illustrate the text rather than to randomly preserve a butterfly. My guess is the butterfly was placed in this old book by someone interested in butterflies rather than old books, and that would appear more likely to be an early owner than a later one.

As can be seen in the picture, the colorful butterfly has been pressed in alongside of the black and white woodcut of what appears to be the same species. Ms. Lecky-Thompson identified the butterfly as likely being a small tortoiseshell. This species is found throughout most of Europe and Asia.