Recently Acquired Material in the Law from The Lawbook Exchange 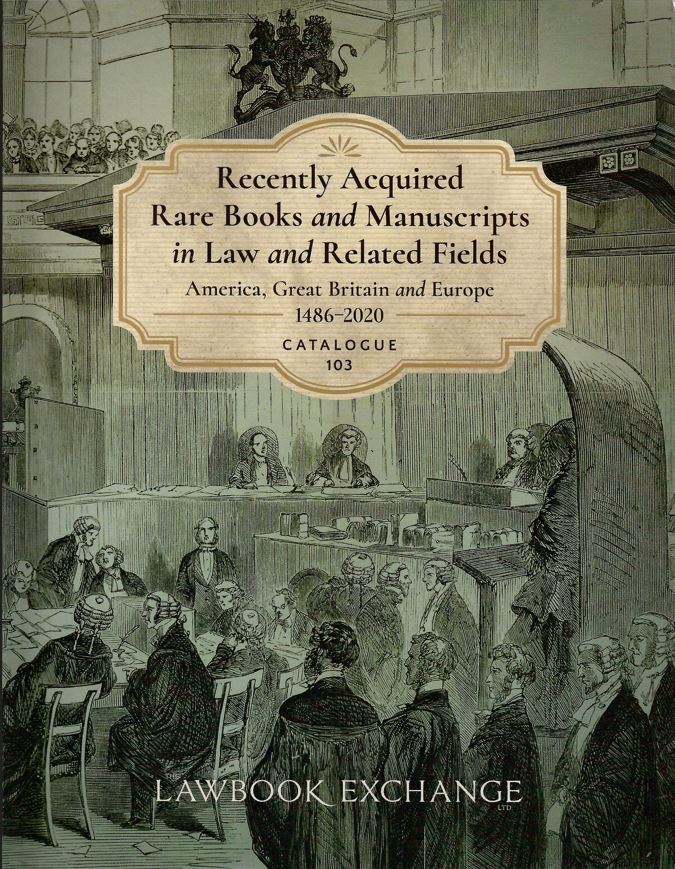 All about the law.

The Lawbook Exchange has published a catalogue of Recently Acquired Rare Books and Manuscripts in Law and Related Fields, America, Great Britain and Europe 1846-2020. Or, using the short title, Catalogue 103. It is filled with titles relating to the law, law books for practitioners, important cases, personal effects of notable jurists and lawyers, and a great number of salacious case histories, usually involving murders and subsequent hangings. A couple of centuries ago justice was swift, unapologetic, and irreversible. Entertainment through gruesome morality tales was popular with the literary public of the time. Here are a few items from this selection.

We begin with an item from the first American edition of William Blackstone's Commentaries on the Laws of England, better known as Blackstone's Commentaries. This is volume four (only), published in 1772. It belonged to Virginia's influential Byrd family, intimately involved in the state's politics for centuries. It apparently came from the library of William Byrd III, containing signatures of his second wife, Mary Willing Byrd, and two of his sons, Francis Otway Byrd and William Powell Byrd. A couple of annotations are found which testifies to the progressive attitude of its owner. Where Blackstone refers to “Offenses against God and Religion” saying “Doubtless the preservation of Christianity, as a national religion...” the annotation reads “Bill of Rights of Va. 16.” Where Blackstone writes of “These [forms of blasphemy] are offences punishable at common law by fine and imprisonment, or other infamous corporal punishment...” the annotation says, “happy for Va the same has by the 16 article of the Bill of Rights been referred to conscience.” That article provides that “religion, or the duty which we owe to our Creator, and the manner of discharging it, can be directed only by reason and conviction, not by force or violence.” Unlike the European powers, America was choosing a path of tolerance. Item 12. Priced at $2,500.

Next is a speech by one of the most famous legal orators in American history, Clarence Darrow. Darrow was called in to defend a man popular with workers, but not with the powerful, accused of murder. William “Big Bill” Haywood was the leader of the Western Federation of Miners in 1905. The victim was Frank Steunenberg, a former governor of Idaho, one-time friend of workers but who brought in the military to put down unrest after a non-union mine was destroyed. A few years later, he was assassinated, and after initially claiming innocence, Harry Orchard, a miner, confessed. However, hoping for mercy, Orchard implicated several union leaders in a plot to commit the assassination, Haywood included. It was a long trial, hundreds of witnesses for both parties, concluding with a lengthy closing statement by Darrow. It was emotional and atypical of closing arguments, but it resulted in an unexpected acquittal of Haywood. Orchard was sentenced to life. The publication of his statement (1908) is titled Sytton: Lakimies Clarence S. Darrowin Paatajaispuhe Haywood Jutussa Idahossa. If you are struggling with that one, it means “Blameless: The Speech of Clarence S. Darrow in the Haywood Case in Idaho,” in Finnish. The reason for this translation is that there was a large community of Finnish miners in the upper peninsula of Michigan who admired Darrow for his defense of laborers. Item 42. $650.

Here is another defense of liberties. Item 120 is from playwright George Bernard Shaw. This is one of 250 copies of the only edition of Shaw's statement in 1909: Statement of the Evidence in Chief of George Bernard Shaw Before the Joint-Committee on Stage Plays. Shaw was dedicated to ending censorship in the theater. It was prepared for the Parliamentary committee, but, perhaps anticipating Shaw's position, they would not let him read it out loud and did not print it in their report. Shaw had to have these copies privately printed himself. It took a long time, but censorship in the theater was finally abolished in 1968, 18 years after Shaw died. $450.

Society has never quite known how to deal with people having mental or other attributes outside of the mainstream. Parliament enacted a couple of laws back in 1740 to address these issues. Item 57 contains two such acts. The first is An Act for Amending and Enforcing the Laws Relating to Rogues, Vagabonds, And Other Idle and Disorderly Persons... It deals with treatment and confinement of people “of little or no Estates, who by Lunacy, or otherwise, are furiously mad or so far disordered in their senses” as to pose a public risk. The act made it legal to imprison such people without charge. The second is An Act to Prevent the Marriage of Lunaticks. This act disallows the marriage of “Persons who have the Misfortune to become Lunaticks,” as they are “liable to be surprized into unsuitable Marriages.” Item 57. $650.

If you want to read about crime and criminals, all the gory details, there were publications in 18th century London to keep you abreast of all the latest news. The Newgate Calendar began as a monthly publication of executions from the keeper of the Newgate prison. However, that title was later appropriated by various publishers who printed sensational accounts of crime and punishment to entertain the masses. Item 37 is such a publication, The Malefactor's Register, Or, The Newgate and Tyburn Calendar. It was published in 1779. We will let the publisher describe it further: “Containing the authentic lives, trials, accounts of executions, and dying speeches, of the most notorious violators of the laws of their country, who have suffered death, and other exemplary punishments...from 1700 to lady-day 1779.” It continues, “and complete narratives of all the capital trials for bigamy, burglary, felony, forgery, highway-robbery, high treason, murder, petit-treason, piracy, rapes, riots, street-robbery, unnatural crimes, and various other offences.” If that doesn't pique the reader's interest I don't know what will. $3,000.