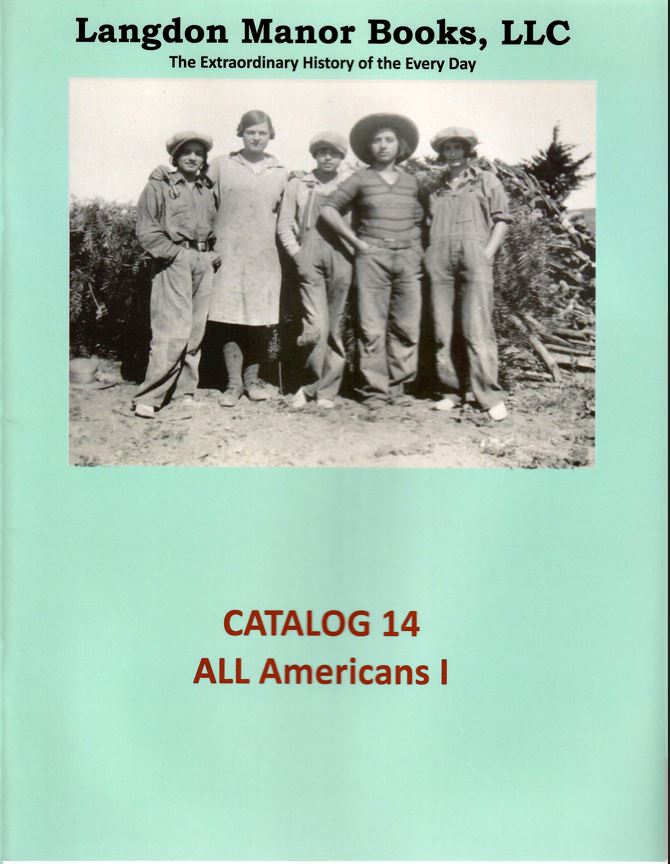 Langdon Manor Books has issued their Catalog 14: All Americans I. This is the first of a planned series celebrating Americans of all stripes – nationalities, ethnicities, colors, religions – all of us Americans. They explain, “With acts of hatred and division dominating headlines, we decided we wanted a catalog that reflected the strengths created by the country's vastly different cultures and social groups.” After all, we “are all (with rare exceptions) immigrants,” the rare exceptions being Native Americans. America is what we used to call a “melting pot,” e pluribus unum, as our coins remind us (maybe we need to put that on our credit cards because no one uses coins anymore). I don't know why this concept is so hard to understand since it wasn't that hard for our ancestors, but these are troubling times. I digress. Here are some samples of the material you will find in this catalogue of “real Americans.”

That's an extraordinary photo on the cover of an American farming family from the first half of the twentieth century. That is the Rodrigues family of California, a collection of photographs mostly from 1910-1950. It was the family of Jose or Joe Rodrigues and his wife Maria, who came to America around 1910. They were part of an immigrant group you don't hear much about, but they played an important role in the fishing industry along the coasts of Massachusetts and California. They were Portuguese, a nation of some of the most important seafaring explorers, including Magellan and da Gama. No one mastered the seas like the Portuguese and they brought their skills to America. However, the Rodrigues family went straight to California on arrival to become farmers and ranchers. Joe served in World War I and Joe and Maria were naturalized in the 1930s. Along the way, they had one son (the oldest) and four daughters. You can follow the lives of this family as they work, play, celebrate holidays, and all the other things people do, in 455 photos. A large number are of son Albert while he served in the military during World War II. He was stationed in Iran. Item 41. Priced at $5,000.

One group that has often lived in poverty or near poverty and ceaselessly been ridiculed, but don't have much of a voice in Washington, are the Appalachian people. Largely of Scotch-Irish descent, they settled in Appalachia and places in the South. The Appalachian people have often been portrayed as ignorant, the hillbillies of Hee Haw or the Clampetts. Wylene P. Dial was a co-founder of the Mountain Heritage Program at West Virginia University and she undertook a study of their language. The result is this publication, The Dialect of the Appalachian People, published by the Minority Studies Division of the Race Relations Institute at Patrick AFB, Florida. This is a reprint of #6 of the Mountain Heritage Series, printed by the Air Force as part of its program to relieve racial tensions in the military. She found that the dialect some considered “debased and ignorant” is actually an archaic language, “sort of Scottish flavored with Elizabethan English.” Item 7. $250.

America had a flood of Vietnamese immigrants at the close of the Vietnam War. They were refugees, friends of the old pro-American South Vietnamese government that fell to the North Vietnamese Communists. The fortunate few got out fast before being captured. Huynh Van Cao was not so lucky. He had held several important posts in the South Vietnamese government. Cao was captured by the North Vietnamese. He spent 12 ½ years in a prison camp, or as they called them, “re-education camp” (he must have been a slow learner). He finally reached America and was reunited with his family a few years later. He wrote of atrocities he experienced, brainwashing, sleeping on a cement floor (there were no beds), hard labor, beatings, starvation, forced to carry 35-40 lb. hot stones in summer, long hours outside in the winter without food. “We had to work our hardest in hope that we would get some vegetables at the end of season instead of our daily small portion of grain and salt.” He also talks about Vietnamese history and its future. The title is Secret Talk in Communist Prison, the title referring to quiet talks he had there with a friend. This book was not published but this is a mechanically produced copy from 1990-1991. Item 51. $1,250.

This is a book by a remarkable woman, whose life was filled with much suffering but nevertheless kept an upbeat attitude, thanks to her faith. Her name was Eliza Suggs. Her parents had been slaves. Her father had but few memories of his own family, having been sold off at the age of 3, never to see his family again. After emancipation, they settled down, having four daughters. Eliza was the youngest. At a very young age, she began suffering numerous bone fractures. She had a disease now known as osteogenesis imperfecta or brittle bone disease. She spent the rest of her life being wheeled in a carriage or chair, eventually looking like an adult of face but child in body. Despite being a black girl with ailments that made going to school difficult, she became educated and was very smart. She also followed her father into preaching. This is her book, Shadows and Sunshine, published in 1906. It is her autobiography and her family's story as well, along with three poems she wrote and pictures of herself, her mother and father, and her sisters. Item 1. $1,750.

This item doesn't pertain to a typical minority group like a race or ethnicity, and yet these are some of the poorest people in America. You will find them in every city. They are the homeless. Item 20 is a handmade, plastic spiral bound book by Los Angeles artist J. T. Steiny. It consists of 56 black and white photographs. However, they are not of homeless people or even homelessness scenes. They are of furniture, couches and chairs found along curbs and other public places. They are places a homeless person would stop to rest, perhaps for the night. The furniture is, at the time of the photo, empty. They allow readers to imagine what it would be like to be homeless yourself. The title is Homeless and it was produced circa 1980s. $475.