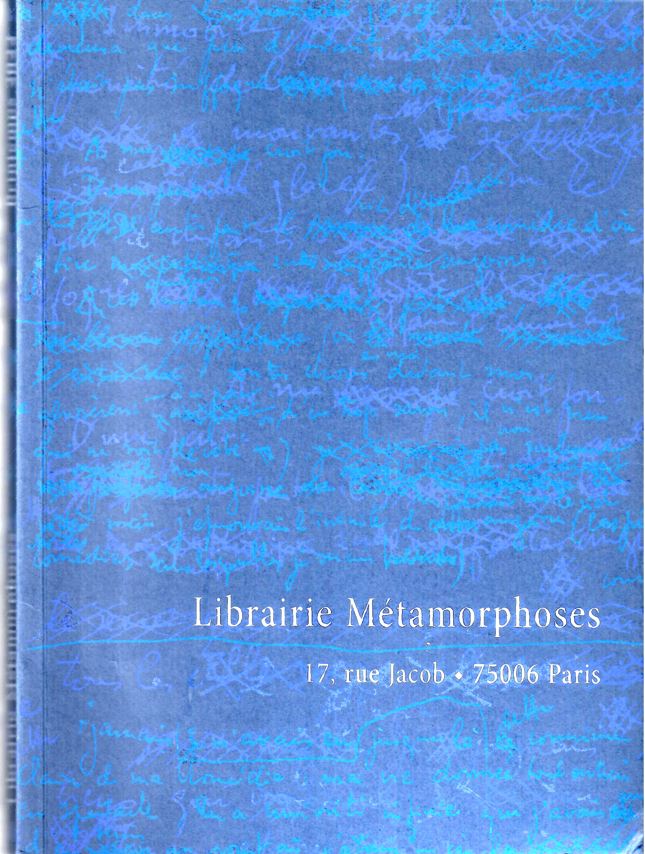 “To make an act of allegiance to the French language, love and submission, is for the writer the only hope that remains to him of reconstituting himself entirely, of restoring himself to his primitive integrity.” That quote from journalist Jacques Drillon introduces the latest catalogue from Librairie Métamorphoses, Livres Rares & Documents Précieux (Rare Books and Valuable Documents). You may notice the irony of translating that statement to English. In the catalogue it is written in the appropriate francais. Not surprisingly, the catalogue descriptions are too. Unfortunately, my French is limited to a few high school courses many years ago. As such, my understanding is maybe about as much as a three-year-old French child. Imagine a three-year-old child trying to explain descriptions of great French literature! I hope I can elicit more sympathy than condemnation.

What I can tell you is the catalogue and the great majority of the books were written in French, and a majority of the authors are French. However, there are also some translations of books originally written in other languages. I can also tell you this is an unusually thick catalogue, though not because it has an extraordinarily large number of items. It's because the descriptions are thorough and detailed. You won't be left guessing what it is or why it is important. Librairie Métamorphoses has provided the information (and images) you need to make a good choice. These are a few samples of the material to be found in this collection.

Marie-Catherine Le Jumel de Barneville, or Baroness d'Aulnoy, or simply Madame d'Aulnoy, led an exciting life. Married at 15 in an arranged marriage to the Baron d'Aulney, a man far older, she was later implicated in a plot that landed her husband on death row for three years until he was exonerated. She supposedly help put him there. It was not an ideal marriage. She left the country for a few years. She had six children, not all of whom were shared with her husband. Her sojourn in other lands enabled her to write some histories of them, of dubious accuracy. But, it all can be forgiven by a new type of story should created. She called them “contes des fées.” That's tales of the fairies, or fairy tales. This is her Nouveaux Contes Fées, which followed her first set of fairy tales. It is a 1700 second edition, the first from 1698 virtually unobtainable. This edition is itself quite rare. It consists of two volumes in one. Item 12. Priced at 5,000 € (euros, or approximately $5,367 in U.S. dollars).

This is a first edition from 1947 of La Peste by Albert Camus. That translates to The Plague. It is a fictional account of a plague that attacks the Algerian city of Oran. This is from the time when Algeria was still a French colony. It is where Camus grew up. However, many see this as an allegory for France occupied by the Nazis during the second world war. Camus wrote it during that period. The lock down and isolation Oran suffered has given this novel a rebirth as the situation is reminiscent of the Covid 19 plague. This copy is inscribed “A J. Jaujard en sympathetique hommage Albert Camus.” (in sympathetic homage). Jacques Jaujard, like Camus, was involved in the French resistance and was largely responsible for removing the Louvre art collection to safe locations away from the Nazi invaders. Item 80. 3,000 € (US $3,220).

One of France's best-known authors, not necessarily for all the right reasons, is Donatien Alphonse François de Sade, better known as the Marquis de Sade. He was a prolific writer, much of it written in prison or an asylum where he spent most of his adult life. His work was rather rough for our time let alone his own, over two centuries ago. It was filled with what that suspended baseball player called “rough sex,” orgies, bestiality, necrophilia, and, of course, sadism, named for the Marquis. He was philosophically an extreme libertine, though his personal life did not live up to the level of perversion or whatever you want to call it of his books. It was his writing that got him in trouble and kept him off the streets for much of his life. This book is titled La Nouvelle Justine, ou les Malheurs de la vertu. That translates to the “new Justine, or the misfortunes of virtue,” but a translation of its title is as far as you will get. The book has never been translated to English. Sorry. Justine is a virtuous young girl, later woman, who is violated by various unvirtuous men. This book continues with stories about her sister, Juliette. They were from an unfortunate family. This is an uncommon set (details in the catalogue). 40,000 € (US $42,768).

This is the story of one of the most famous Frenchmen to visit America. I know what you're thinking – Alexis de Toqueville or maybe Lafayette. No, no. Bigger than that. Tintin! (technically, Tintin was Belgian). The book is Les Aventures de Tintin Reporter. Tintin en Amérique (The Adventures of Tintin Reporter. Tintin in America). It was published in 1937, perhaps a good time to get out of Europe. Like de Toqueville before him, Tintin came to report on what was happening in America. The fearless journalist took on the mob in Chicago, Indians in the West. He handled American clichés well. This graphic novel (to the less sophisticated “comic book”) is in black and white except four pages are in full color. The author of the Tintin stories was Georges Remi, better known as Hergé. Item 70. 2,500 €. (US $2,675).

This is one of the great books, but perhaps its translator should be given as much credit as the author. This work was written in Russian and it is a massive read, worth every bit of your time. It is La Guerre et La Paix, in English, “War and Peace. The author was Russian Lev (Leon) Tolstoi. Translating the three-volume masterpiece must have been almost as much of a challenge as writing it. Credit for this goes to Princess Irene Ivanova Paskevitch (born a Vorontsov-Dashkov). She was a princess, but only through some very distant relatives. In Russia, those titles last longer than most countries. If not great royalty, she was a great translator to tackle this one. This 1879 French translation is the first edition in a language other than Russian, preceding the English edition by seven years. The book takes us through the lives of several Russian families through bad times, wars, starting with those against Napoleon, to the somewhat better then current times. Item 39. 4,800 € (US $5,127).

Librairie Métamorphoses may be reached at +33 (0)1 42 02 22 13 or librairie.metamorphoses@gmail.com. Their website is found at librairiemetamorphoses.com.