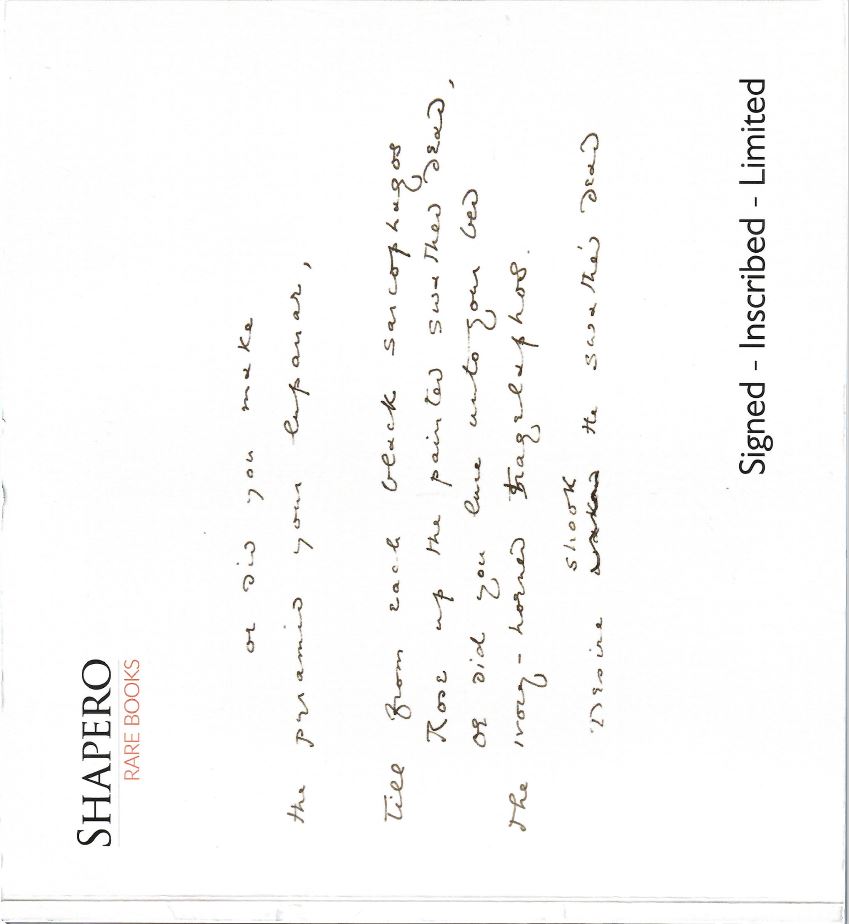 Shapero Rare Books has published a catalogue of Signed – Inscribed – Limited. Most items have the author's signature along with some comments by him or her. A few have inscriptions from someone else, but those people are either in some way related to the book or the author. If you like evidence that your copy was actually touched by the author or related person, here it is. Some books are signed limited editions, but most reflect a personal relationship with the recipient. Here are a few samples from Shapero's list of 137 titles.

There are three great men of the twentieth century who achieved remarkable change in their homelands through peaceful resistance. They would be Gandhi, Martin Luther King, and here is the third. The book is The Illustrated Long Walk to Freedom by Nelson Mandela, published in 1996. Those would have been very short walks as Mandela spent 27 years in a prison cell, so that was speaking figuratively. Finally, the white South African government was forced to free him as the apartheid system was quickly becoming unviable. Rather than filled with anger and revenge, Mandela worked to form a multiracial democracy that would serve all. Within a short time, he was elected President of South Africa. Mandela has inscribed this copy “To Penny Middleton, Best wishes to a dynamic lady who has helped considerably to produce future leaders of our beloved country. N Mandela 7.4.97.” Penny Middleton was an activist and teacher, and it was in her role as teacher that Mandela recognized her as producing future leaders. Item 83. Priced at £3,750 (British pounds or approximately $4,629 in U.S. dollars).

Next we have a book that is signed by its arch-villain, or at least, that villain's son. The book is You Only Live Twice, one of Ian Fleming's James Bond series. That villain was Blofeld, a really terrible human being who had already appeared in a couple of previous Bond books. In this one, Blofeld gets his just reward after a duel with Bond. This copy, a 1964 first edition, first impression, first state is signed by Henry Blofeld, well known in Britain as a sports writer and cricket commentator. He is the son of Tom Blofeld, a friend of Fleming, whose name he borrowed for this novel. Item 43. £975 (US $1,204).

This is a first edition, third printing of F. Scott Fitzgerald's first novel, This Side of Paradise, the one that changed him from obscure writer to major American novelist. This is a particularly notable issue, it being known as the “Apology Issue.” It was issued specifically for booksellers and is the only signed limited edition by Fitzgerald. It came with a tipped in photo of the author along with “The Author's Apology,” and written in hand “Sincerely” and his signature. He describes writing the book as “a substitute form of dissipation.” Even then Fitzgerald knew who he was. He continues, “My whole theory of writing I can sum up in one sentence. An author ought to write for the youth of his own generation, the critics of the next, and the schoolmasters of ever afterword. So, gentlemen, consider all the cocktails mentioned in this book drunk by me as a toast to the American Booksellers Association.” Item 42. £15,000 (US $18,742).

The author of this book is better known as a playwright, and you can add to that actor on stage and screen, director, songwriter, even a dancer early in his career. This is Noel Coward, or later in life, Sir Noel Coward, having been knighted for his achievements. This is a first American edition of Present Indicative. It is an autobiography of his early years and is said to be very funny, Coward having a great sense of humor. This copy is inscribed to a fellow actor, singer and dancer, Maurice Chevalier. Coward writes, “With profound admiration and affection Noel.” It comes with a personal letter to Chevalier which Shapero describes as “gushingly thanking his correspondent for writing him.” Item 32. £650 (US $813).

This is the first UK edition of Maus II A Survivor's Tale and Here My Troubles Began, published in 1992. This is Art Spiegelman's graphic novel recounting his father's experiences in a concentration camp and the difficult relationship with his son left by those terrible scars. Spiegelman used mice and other animals to portray the various nationalities of the people involved. This copy is inscribed by Spiegelman “For Tom with thanks for our hardcover MAUS all the best art Spiegelman.” Tom was Tom Rosenthal whose firm published the book. The inscription emanates from an original drawing of Maus on the front free endpaper in a balloon, comic book style. Maus has appeared in the news recently as part of the current book banning epidemic striking American schools. It apparently has a few swear words, animal nudity, and general unpleasantness, but it's hard to tell the story of Nazi concentration camps in a happy, pleasant manner. Item 116. £650 (US $813).