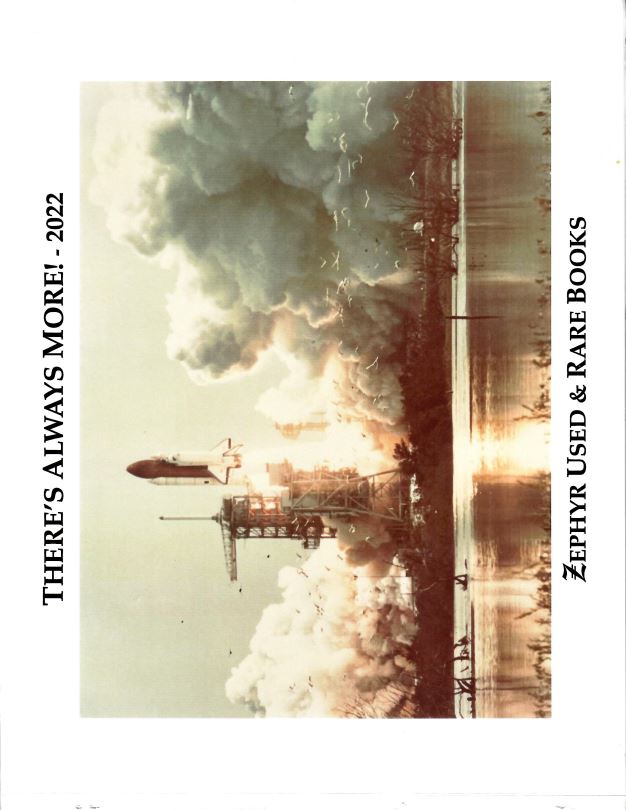 Zephyr Used & Rare Books has published a catalogue entitled There's Always More! - 2022. Indeed there is. Zephyr begins the description of what they have with, “the wide ranging selection assembled here, encompasses Edwardian titles on aquariums, architectural house plan books, three truly scarce Mid-Century Modern plan books for Shell Service Stations in California...” Good luck tying those together and that is just the beginning of material offered. There are books, less than classics, catalogues, pamphlets, photographs, lots of advertising, and much more. Zephyr's catalogues are always fascinating and fun, not what you might expect from an average bookseller. Here are a few items.

We begin with the architectural plan book for your 1960 Shell Service Station. Most oil companies have changed their names, combined, or at least changed their signage but Shell Oil has been consistent, that same yellow scallop-shaped sign with a red “Shell” written on it after all these years. The service station is reminiscent of the modern ranch-style you would have seen everywhere in the 1960s. There is an office with large plate glass windows and two bays to provide service, something service stations used to do. They'll get your Edsel back on the road in a jiffy. What is missing compared to every gas station today is the convenience store. It may have had a soda machine but that's about it. You could get maps there and they were – get this – free. It even looks like you could have used the bathroom at this station without fear and trembling. Check your oil, fill your tires, wash the windows, pump your gas. The motto on the station, “Service is Our Business,” was real. Item 58982. Priced at $475.

This is a story of a great adventurer. His name was Frederick Russell Burnham and his book is Scouting on Two Continents, by Burnham and “edited and arranged” by Mary Nixon Everett, published in 1927. Burnham grew up on a Sioux Reservation, learning the ways of Indians. It came in useful when he became a scout for the army during the Apache Wars. His other avocations included stagecoach guard, deputy sheriff, and a prospector in the Klondike. Next came the second of the two continents. In 1893, he took off for Africa. He became a scout for the British in Southern Rhodesia (now Zimbabwe) during the Matabele Wars, and then in South Africa during the Boer War. He earned the highest of military honors for an American from the British government, along with the rank of Major in their army. He later returned to America, became involved in defense work, active in several conservation organizations and the Boy Scouts (earning their highest honor), and earned substantial wealth through oil discoveries. Not all of the later accomplishments appear in this book as he lived another 20 years after its publication. All in all, quite a life. Item 59070. $150.

If you needed something threshed, there was no better place to turn than to Case Threshing Machinery in 1913. Case, at various times known as J. I. Case, Case Co., and other names is big in the heavy equipment business. They were started in 1841 by Jerome I. Case who developed a threshing machine for farmers, but they later evolved into all sorts of farm and road building products and engines. They were noted for their steam engines that powered the equipment until the 1920s when they turned to gasoline. While officially a threshing machine catalogue it includes other items they were selling in 1913. One of them, for which I must plead ignorance, is cars. There were Case cars from 1910-1927. In 1909, they purchased the Pierce Engine Company, maker of the Pierce-Racine automobile which they rebranded as Case. This was a different company from the better known Pierce Arrow. Item 59067. $550.

Here is a catalogue about communications long before the internet: Your coming radio as forecast by General Electric, first in radio, television and electronics. The cover features a large picture of a vacuum tube, which tells you at a minimum it's going to predate 1960. It promotes its forthcoming line of radios, including FM, which eliminates the static so common to AM. And then there's the section, “It's Television!”. That wouldn't be surprising except that the catalogue is from 1944. Who had televisions in 1944? Where could you even find a broadcast signal then? It turns out that there had been random broadcasts as far back as 1928, and the pioneer in broadcasting was none other than General Electric. Still, in 1944, it was rather random, and there wouldn't have been signals much of anywhere in America other than New York. They display a picture tube and it is round, not the oblong to rectangular ones with which we are familiar. It would not be until the second half of the 1940s that the television networks would begin to form. Item 58974. $75.

It's hard to do justice to something as beautiful as orchids. Here is a book that does. It is The Orchid Album, comprising coloured figures and descriptions of new, rare, and beautiful orchidaceous plants... There's a new word that not even spell check recognizes. It comes in 11 volumes, published 1882-1897. There are about 1,200 pages, with a hand-colored frontispiece and 526 hand-colored lithographs. Five of the volumes have University of Liverpool bookplates stating “Dispersed, June, 1911.” These come from the time known as “Orchidelirium,” the late Victorian era when the rich sought out the hard-to-find and expensive plants which they struggled to grow in cold climates. Treasure hunters risked their lives to collect them in far-off tropical lands. It was like the tulip mania of Holland two centuries earlier or, yes, bibliomania. The book was created by Robert Warner and others and the beautiful pictures are as appealing as they were over a century ago, unlike the plants that mostly died quickly. Item 58883. $12,500.

Zephyr Used & Rare Books may be reached at 360-695-7767 or zephyrbook@gmail.com. Their website is found at www.zephyrusedandrarebooks.com.