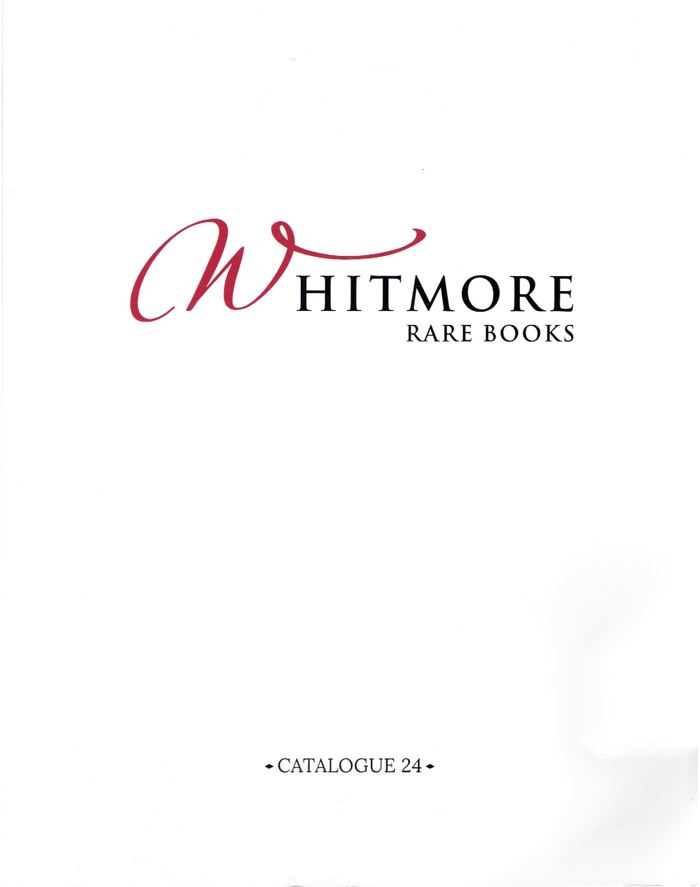 Whitmore Rare Books has published their Catalogue 24. It offers a selection of great literature, from the 15th to the 20th century, covering a wide range of topics. You will recognize most of the books and authors as they are household names. These are important and highly collectible books worthy of the finest collections. These are a few samples.

First up is sort of a finality, The Grave, A Poem. It was written by a Scottish poet, Robert Blair. It is a poetic bit of philosophy from a cemetery, a type of work that had a certain appeal in its day but not much in ours. Blair only produced three works, the other two of no significance. This was his masterpiece, but most critics today would consider it a masterpiece only because of the paucity of competition. Still it was not only popular in the decades after first published (1743) but very much today. Why? It turns out this edition was illustrated by a real master, William Blake. Blair never knew because he died 11 years before Blake was born. Many years later, publisher Robert Cromek decided to publish a new edition of the epic poem and hired Blake to create the illustrations. He created 40 of them of which Cromek selected 20 for inclusion. That is why this edition is so valuable, while others are of much less interest. This copy is from the quarto edition. Item 8. Priced at $3,950.

Quick, name a poem. The Raven, right? I'm a mind-reader. Actually, that one was too easy. There isn't another poem as well-known, at least in America. Even its author, Edgar Allan Poe, realized he had written one for the ages when he created it. He declared it “the greatest poem ever written” even before it was published. One like it has nevermore been written. Nevertheless, the modest Poe wrote in the book containing the The Raven, “In defence of my own taste, nevertheless, it is incumbent upon me to say that I think nothing in this volume of much value to the public, or very creditable to myself.” Since it is not an epic length poem, it appeared in a book of poetry, The Raven and Other Poems. It was published in 1845. Item 50 $45,000.

This is the second most expensive item in the catalogue and yet its writer is not even known for being an author. Go figure. He was a musician. That would be John Lennon, the Beatle. This is his Bag One portfolio, with a collection of 13 prints, each signed by the artist in pencil. The prints along with the title page and a poem are in a brown card folder, all in a white vinyl carrying case. It is labeled in bold lettering BAG ONE. There were 300 sets created in 1970, it following John and Yoko's “bed-in for peace.” They spent a week in bed in an Amsterdam hotel in 1969 with guests invited while they pleaded (unsuccessfully) for peace in the world. The drawings were taken to London for a showing only to have eight seized for obscenity. They may be erotic in nature but these are hardly realistic portrayals of humans. Lennon was a great artist, but music artist, not portrait artists. You have to imagine. Item 41. $150,000.

This is one of the more bizarre signed books you will find. It is The Love Letters of Mark Twain, written by, of course, also known by his actual name of Samuel Clemens. It was published in a limited edition of 155 numbered copies in 1949. This is #30. Remarkably, Twain was born in 1835, making him 114 years old at the time. Even more amazingly, he died in 1910, meaning he was gone 39 years by then. How did he do this? The signatures, and he has signed both as Mark Twain and S. L. Clemens, are genuine. Twain had a great sense of humor, but coming back from the dead was not one of his jokes. Years earlier, Harper and Brothers planned a signed Twain edition. He signed a bunch of blank pages intended to be inserted when printed. They were never used, sitting around Harper for 50 years before someone got the clever idea of putting them in a new book. It's dubious Twain would have approved of this book. It is a compilation of personal love letters he wrote his future wife and then wife Livy between 1868 and her death in 1904. As expected, there is some humor, some seriousness, and some melodrama as when he wrote her after being turned down. He says he can accept it because his life has already been filled with “grief, disaster & disappointment.” It worked as a few months later they were engaged and married in 1870. Item 74. $12,500.

This one is for collectors of incunabula, Questiones Subtilissime... published on June 9, 1497. This is by Albertus de Saxonia (Albert of Saxony). Albert wasn't around to witness this publication as he lived in the 13th century, prior to printing. He was a natural philosopher, focused on logic, particularly in regards to language, and that which happens in nature. He may not have been what we think of as a scientist today, but he was one who began leading us toward scientific study. If his era was part of what we think of as the “Dark Ages,” Albert was one of those began to turn on the light so that the Renaissance could begin a century later. Item 2. $8,000.

Whitmore Rare Books may be reached at 626-714-7720 or info@whitmorerarebooks.com. Their website is www.WhitmoreRareBooks.com