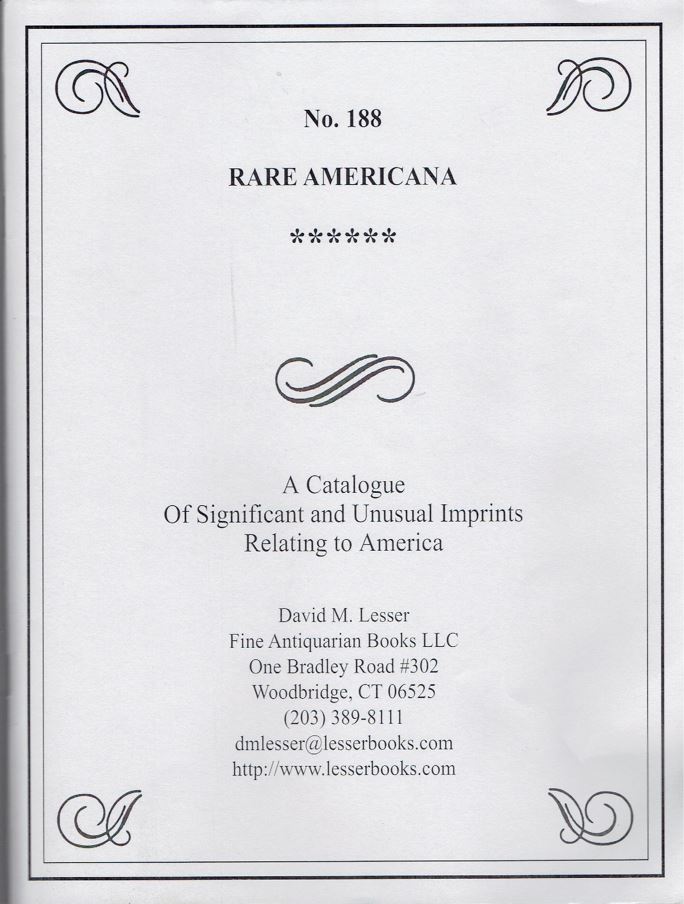 David M. Lesser Fine Antiquarian Books has published a new catalogue, No. 188 of Rare Americana. It is filled with much contemporary work of 18th and 19th century Americana. There are numerous broadsides, pamphlets, prints and manuscript documents in the collection. For those who collect American Presidents, particularly the more obscure ones, there are several presidential almanacs for Presidents William Henry Harrison and Zachary Taylor, generally printed for campaign purposes. Between them, they only held office for 1 ½ years, less than half a term. Add in the inaugural address of James Garfield and we have three Presidents with a combined two years in office. They might have become greats but we will never know. If only... Here are a few of the other selections from this catalogue.

We usually present accounts of the American Revolution from the side of the Americans. It is time for some balance. This one comes only with the small heading BOSTON, 26th June, 1775. Published by the pro-British printer John Howe, it is an account of the Battle of Bunker Hill, which actually took place on Breed's Hill. Loyalist Howe witnessed the battle and presented his opinion in this scarce broadside. Despite impediments such as walls and fences, “vast numbers of rebels,” and heavy fire, the British still drove forward. “The rebels were then forced from other strong Holds, and pursued 'till they were drove clear of the Peninsula, leaving Five Pieces of Cannon behind them.” He concludes, “This Action has shown the Bravery of the King's Troops, who under every Disadvantage, gained a compleat Victory over Three Times their Number, strongly posted, and covered by Breastworks. But they fought for their KING, their LAWS and CONSTITUTION.” Now for the rest of the story. The British did indeed “win” the Battle of Bunker Hill, but it was a costly, Pyrrhic victory. The British suffered many more casualties than the Americans in chasing them to the highlands beyond Boston. The losses were too great. The British never attempted to seize territory around Boston again and eventually abandoned the city to the patriots. Item 13. Priced at $20,000.

This was one of the saddest times in American history, and it has been captured in this Currier & Ives print. The caption states, The Funeral of President Lincoln, New York, April 25th, 1865. Passing Union Square. The Magnificent Funeral Car was Drawn by 16 Gray Horses Richly Caparisoned with Ostrich Plumes and Cloth of Black Trimmed with Silver Bullion. Even the horses were wearing black on this somber day as Lincoln's coffin was drawn though the streets of New York, to lie in state at City Hall on April 24-25, 1865. Lincoln was taken by train back home to Springfield, Illinois, after his assassination on April 15. The slow train would stop at 14 cities along the route so that the loving crowds could pay their final respects. He was buried in Springfield on May 4. One can see soldiers and mourners along with the horses and funeral car being taken through New York in this image. Item 32. $750.

Josiah Burnham was apparently a very unpleasant man whom few if any people liked. He lived in New Hampshire, where, at an age now in his 60s, he got into some financial difficulties. He also became a co-respondent in a divorce action so perhaps someone did like him. Burnham found himself in jail for forgery and swindling. He was held with two other men and didn't get along with them either. Supposedly, they had been needling him about the divorce action. Burnham managed to make a knife in prison which he pulled out and proceeded to cut the two men apart. That added one more charge to his crimes, actually two, double murders. One of his lawyers was the then young Daniel Webster, but not even the great orator could save him. Webster later recalled that his defense was an attack on capital punishment, not because he was against it but because he had nothing else to argue. His guilt was obvious and Webster couldn't even find a single good character witness. Burnham did manage to get a temporary reprieve but that was only so transportation of his body to Dartmouth's medical school could be arranged. Burnham was hanged on August 12, 1806, before a crowd of over 10,000 spectators, including children, some of whom brought picnic baskets. They were glad to be rid of him. Item 14 is An Analysis or Outline, of the Life and Character of Josiah Burnham; Who Was Sentenced to Death, at the Supreme Court, Holden at Plymouth, on the 4th Tuesday of May, 1806. $2,000.

This book is a look at the South shortly after the Civil War, the early days of Reconstruction. The author was Whitelaw Reid who had been a newspaper reporter during the war, present at the Battle of Gettysburg. He travelled south twice in 1865-66, the first visit coming with a group that included Salmon Chase, Chief Justice of the Supreme Court. What he found was a South unreconstructed. On the first trip, he saw much unrepaired damage, but by the second, the South was busy rebuilding. What he also found was a people willing to concede they lost the war, and reluctantly willing to accept the end of slavery, but not much else. Southerners were not willing to give freed blacks any of the normal human rights nor even to treat them as more than some form of animal. They considered blacks intellectually inferior, not worthy or capable of voting or of other rights belonging to those created equal. Reid next went on to become editor of the New York Herald, succeeding Horace Greeley as publisher and owner after the latter died. He would serve in various public positions for Republican Presidents and was the party's nominee for Vice-President in 1892 when Benjamin Harrison ran for reelection. That was the presidential election Harrison lost. Reid's book is After the War: A Southern Tour. May 1, 1865 to May 1, 1866. Item 102. $275.

Here is an example of one of those rights still denied Blacks after the war that was corrected by a Supreme Court decision. The case was William Neal vs. the State of Delaware from 1880. Neal had been convicted of “rape upon a white woman,” which carried the death penalty. Neal appealed on the grounds that Blacks had been systematically excluded from serving on the jury. While the 15th Amendment enacted after the Civil War guaranteed the right of all citizens to vote, Delaware, a border state that allowed slavery, had not changed its constitution of 1831. It granted the right to vote only to “every free, white, male citizen of the age of twenty-two or upwards.” While this could no longer be enforced for voting, Delaware still used its own constitution in selecting jury pools, which limited its jury pools to “all persons qualified to vote.” The Supreme Court overturned this nonsense saying the 14th and 15th Amendments had rendered these discriminatory provisions null and void. Item 80. $1,000.