Fine Books from Many Fields Offered by Raptis Rare Books 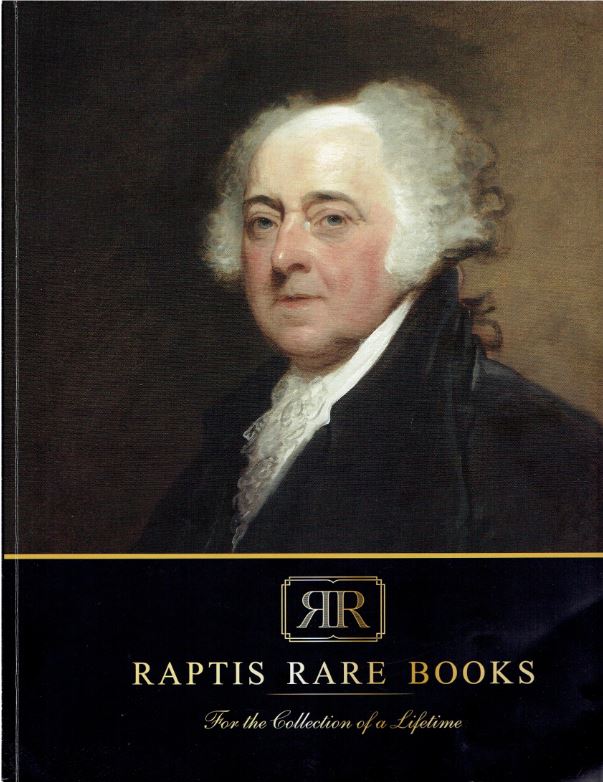 Raptis Rare Books has published a new catalogue of fine books. As usual, it comes without a title, but has a table of contents to inform readers of what sort of material is being offered. Here is the list for this catalogue: History, Philosophy & Religion, Americana, Literature, Children's Literature, Scientific Theory, Economics & Finance, Fine Art & Photography, and Sports & Leisure. The items are all of first rate, important and in excellent condition. Here are a few selections from this latest catalogue.

We begin with a most unexpected item considering the author. It is a manuscript entirely in the hand of Isaac Newton. Newton is certainly one of the top candidates for being called the greatest scientist ever, along with Einstein. His groundbreaking theories on the law of motion and universal gravitation, as well as his work on optics were beyond groundbreaking for his time. What most people don't realize is that Newton's greatest interest was not so much science as religion. He was a devout believer in God and the bible. His scientific work was intended to support those beliefs. Newton believed that the perfection of scientific laws could only come from the hand of a deity, thereby proving the correctness of religious beliefs. Nonetheless, Newton didn't publish his writings on theology, though he wrote much on the topic. The reason was that his theological views would have been very controversial at the time and could have placed him in great jeopardy, for his career and even his life. This manuscript concerns some of Newton's theological beliefs and some of his disputes with orthodoxy. Newton did not believe in the Trinity, thinking it a corruption of the original wording of the bible, resulting from an interpretation enforced by the church in the fourth century. Challenging the concept of the Trinity would have been very risky in Newton's time, so he kept his views to himself and a few close friends. Item 119750. Priced at 150,000.

This is a book that was very controversial in its time. It might be even more controversial today given the nature of the relationship between an older man and a way too young girl. The book is Lolita, and despite the subject matter, it is regarded as one of the greatest books of the last century. Offered is a copy of the 1955 first American edition of Vladimir Nabokov's novel. This copy is very special. It is signed and inscribed by Nabokov, a true rarity. Nabokov refused to autograph his books. He only ever signed them to his closest friends. This one is signed “For Jason and Barbara from Vladimir August 18, 1958.” Jason was Jason Epstein, Nabokov's editor at Doubleday and his advocate when nobody else wanted to publish Lolita. And, there is even more. Nabokov has drawn a butterfly above the inscription and colored it. It's not a bad drawing. Perhaps he could have been an artist if the writing hadn't worked out. Item 121875. $125,000.

Here is another book that seems to have generated more controversy today than it did in its time, though I'm having a hard time understanding why. This is a first edition, first issue of the first Curious George book, appropriately titled Curious George. It is credited to just H. A. Rey, but all of these books were co-written by his wife, Margaret Rey. Hans Augusto did the illustrations. Apparently they believed a male author would work better, so many children's books being written by women. You all know the story. The Man with the Yellow Hat captures George, the little monkey, in Africa and brings him home to England. This and the following Curious George books are the adventures of George, the mischievous monkey who is always getting into trouble. The Man has to bail him out. Supposedly the issue is that taking a monkey from Africa is racist. Poor George has gotten himself in trouble again! Seems like a stretch to me. Item 119542. $5,500.

Next we have a collection of original documents for Oskar and Emilie Schindler as they prepared to immigrate to Argentina in 1949. There are various travel documents that were required for them to make the trip. Oskar, of course, was the great hero in a terrible place during World War II. He opened an enamelware and ammunition factory in occupied Poland in 1940. He went there as a business venture, a plan that he thought would make him a lot of money. It didn't turn out that way, but only because he was an amazing humanitarian. Schindler, a member of the Nazi party, hired many Jews to work in his factory as they were the cheapest labor available. However, as Jews became threatened with extermination, Schindler turned protector. He was able to keep his factory open because it was needed for the war effort, but he could have found other workers. Instead, he claimed the 1,000 Jews who worked for him were irreplaceable in their skills. That alone was not enough, so he began bribing officials so that his workers would not be carted off to a concentration camp. Instead of making more money, he ended up spending his fortune in bribes to protect what were known as “Schindler Jews.” His story, obscure and known by only a few, became familiar to the world with the enormously successful 1993 film Schindler's List. Sadly, his humanitarianism did not make him a hero in his home country after the war. The Schindlers moved to Argentina to start a business anew, but it failed and so did their marriage, Oskar returning to Germany several years later. Item 118106. $25,000.

Philip A. Fisher was an investor, and a very good one at that. He made lots of money for himself and his clients but he was a private and obscure personality. That all changed when he published this book, Common Stock and Uncommon Profits. In it Fisher argued for growth investing – doing thorough research to find great but undervalued companies, buy their stock, and then hold... and hold. Only in dire circumstances would he sell his stock. He was no trader and as long as his judgment was upheld by performance, he never sold. His book became very popular and many people learned from his ways, including one Warren Buffet. Considering that Buffet made something like $100 billion, this might be worth a read. It will surely pay for itself. Item 119748. $7,500.