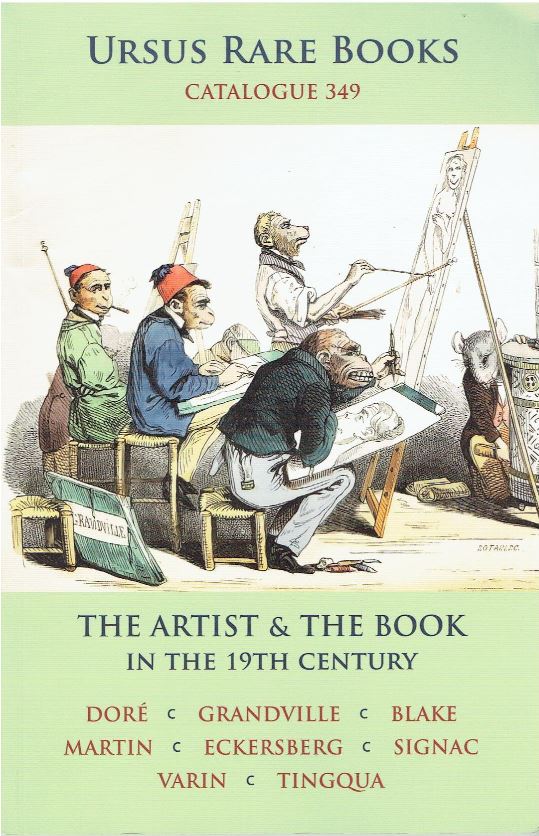 The Artist & The Book.

Ursus Rare Books' latest catalogue is titled The Artist & the Book in the 19th Century. These are 19th century books that feature exceptional artwork. Some are beautiful, others designed to be more humorous. There are even a few meant to teach you how to create such masterpieces yourself. While many are designed to provide faithful depictions or even those more beautiful than life, there are a good number which could be described more as surrealistic, even if surrealism did not yet officially exist. These are a few of the books we found in this latest catalogue.

We begin with a book illustrated by French artist Gustave Doré, and these images are all too real. The book is London. A Pilgrimage, by Blanchard Jerrold, published in 1872. Jerrold was a journalist and friend of Doré. He asked the artist to accompany him on an exploration of London, not just the good parts but the areas scarred with grinding poverty. They scoured the streets, often with plainclothes police protection. This book shows what they found. David Bland, in his History of the Book, describes this as “Doré's chef d'oeuvre.” He also says, “If one book depicts Dickens' London in all its glory and especially misery, this is it; and it is hard to cite another book of any period which so perfectly defines a time and place in history as this book does.” The contrast between how the classes lived is astonishing. This English edition was the first, preceding the French edition by four years. Item 7. Priced at $3,500.

It's unlikely that there is another name as highly regarded for being both an original artist and engraver than that of William Blake. Not that highly regarded during his lifetime, it took many years for his work to be fully appreciated. One man who did recognize his genius during his lifetime was John Linnell and that is most fortunate, as he had the money to commission “Blake's final masterpiece,” which would not have otherwise been possible. Blake needed the money. What he created was Illustrations of the Book of Job, published in 1825, just two years before he died. Blake was long intrigued by the Book of Job, the challenges and suffering of its protagonist. He could see the parallels with his own difficult life. Certainly, anyone who can see parallels with his own life in the Book of Job is not having an easy go. Perhaps he saw Job's rebirth at the end as something he might attain. The book contains 21 engraved plates and an engraved title, all designed and engraved by Blake. This is one of 65 copies on French paper. Ursus explains that most copies are either significantly foxed or have been washed, but this was neither, only having some scattered light foxing. Item 24. $85,000.

J. J. Grandville was one of the 19th century's more imaginative artists. He drew characters, including a book where he transformed animals into beings with human attributes, even so far as anthropomorphizing flowers. His images became even stranger as he aged, leading to this book which can be described as his masterpiece, Un Autre Monde. Transformations, Visions, Incarnations... In English that is An Other World, and this book certainly is other worldly. Strange creatures inhabit Grandville's other world. One can readily see his influence in later works such as Tenniel's illustrations for Alice's Adventures in Wonderland, and in the twentieth century, the surrealist movement. This is surrealistic before there was surrealism. Item 13. $7,500.

Here is a book with 11 lithograph hand-colored plates featuring anthropomorphized animals. The title is Les Animaux Parlants (the talking animals), by Mme Louise Leneveux. For example, one plate illustrates a monkey walking a tightrope while watched by a crowd of ducks and birds in human dress. The artist who created these fantastic and amusing images was Louis Lassalle, a 19th century French painter. Neither artist not author are particularly well known. There are some paintings and other illustrated books by Lassalle out there, while Mme Leneveux wrote several other books, including one about talking flowers. Item 31. $1,500.

Amédée Varin goes one step further into oddities with this book about humanized vegetables. These drawings are reminiscent of the works of Granville. The book is L'Empire des Légumes. Memoires de Cucurbitas 1 er, recueillis et mis en ordre par Eugène Nus et Antony Meray (The Empire of Vegetables. Memories of Cucurbitas 1st, collected and put in order by Eugène Nus and Antony Meray). The book is also known as Vegetable Drolleries. Nus and Meray were the authors of this satire on human nature. Varin, who also worked with Granville, has given the various vegetables, such as carrots, cabbages, onions, turnips and pumpkins human personalities (naturally, the onion is crying). For those unfamiliar with the classification, cucurbitas is the family of certain gourds and melons, but it is also the name of a character in this book. This first edition was published in 1851. $7,500.

Perhaps strangest of all is this book – Viola Tricolor in Picture and Rhyme. This is an 1876 first American edition of a work by prolific artist/author/playwright Franz Graf von Pocci. This is a book filled with humorous nonsense poems. What is unusual is I don't know whether this is so much a book that turns flowers into humans as turns humans into flowers. What von Pocci has done is take otherwise human bodies but replace the heads with pansies, specifically, the viola tricolor species. They have somewhat face-like markings but they are eerie looking faces. This one is bizarre. Item 37. $1,500.