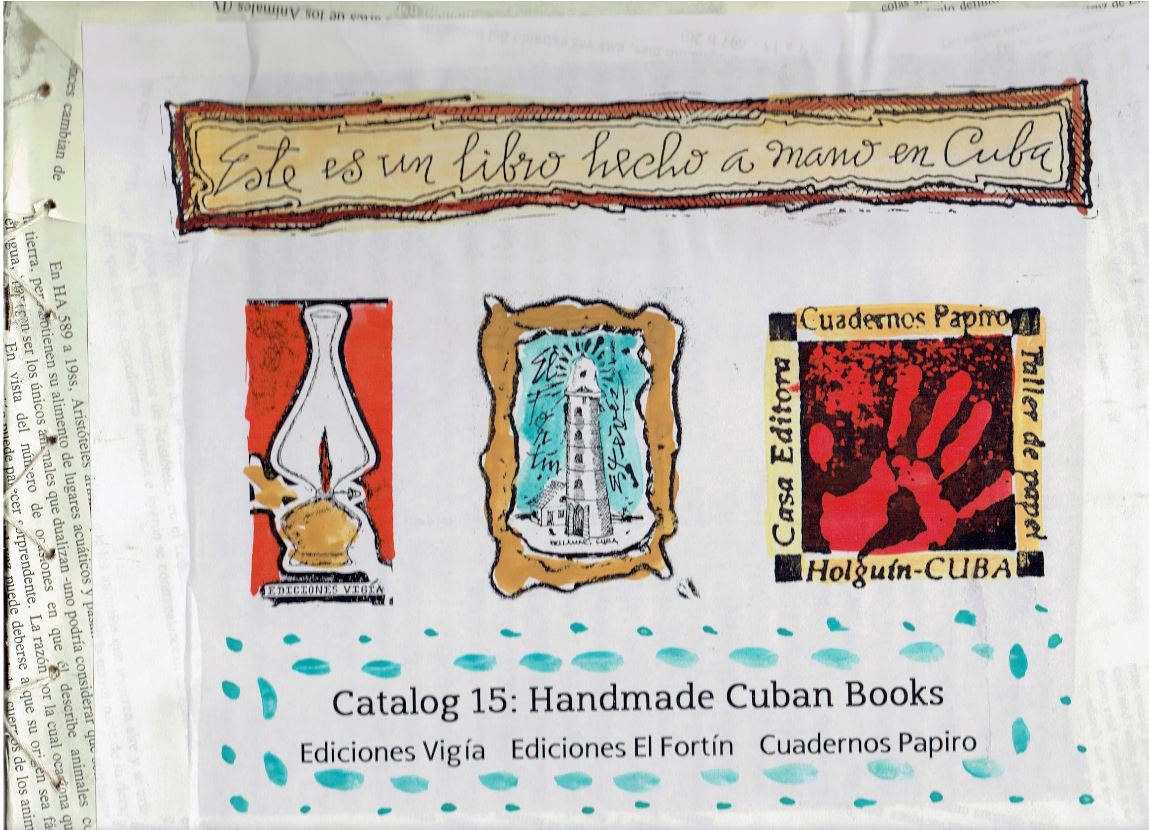 Sometimes we encounter catalogues that are most unusual. We don't mean that in the sense of strange, but rather as different from the typical catalogue. Catalog 15: Handmade Cuban Books from Downtown Brown Books certainly fits that description. Like the items it offers, this catalogue is a handmade book, though an American one. Some serious work went into this, and if you collect the book arts, you will want to collect this catalogue as much as the material offered within. I doubt you will see another like it.

The books come from three publishers, Ediciones Vigia, Ediciones El Fortin, and Cuadernos Papiro. The first thing to note about these publishers is they are of relatively recent vintage, beginning business between 1985 and 2014. Small publishers operating in Cuba prior to the Revolution in 1959 would likely have been highly influenced by the West. By 1985, Cuba was 25 years into its brand of socialism with western contacts replaced by those from East. The result is something different.

In many ways, Cuba is a place frozen in time. It was born in the midst of the Cold War. Cuba quickly chose which side it was on, and that was not the same one as the United States. Consequently, most contacts were closed off and Cuba developed in its own direction. Today, the Soviet Union is history and the Cold War has long since disappeared from the world. Except... in Cuba. It is the last satellite of a nation that no longer exists. Its cold war with America lives on. A combination of history and location has made its fate to continue as a last survivor of a different era, like the old cars on the streets of Havana.

Naturally, freedom of expression is not the same in Cuba as the West. However, that does not mean there is no originality or creativity in Cuba, that everything looks like it was designed by the Central Committee. In the height of the Stalin era there were still avant-garde books and art being produced in the Soviet Union. Even Nazi Germany produced some artistically interesting books, even if the text was thoroughly offensive. Perhaps the text had to conform to “socialist reality,” or at least not offend it, but creative books were still being published. The human spirit finds a way. It does in Cuba.

However, the old cars symbolize another reality about Cuba. They did not survive because someone thought old cars are chic (though they are). They survived because of necessity. Shut off from America and the West, Cuba could not buy new cars. They had to make do with their old ones, for years, decades, now over half a century. Cubans had to survive by tinkering with what they had.

These same shortages face book publishers too, meaning they have to make do with what they can find. For example, they use handmade paper, but rather than this being some exclusive import or product of a high-end paper mill, Downtown Brown explains they are made up of recycled materials, using an old blender or washing machine to make pulp. It's cheaper than trying to buy new paper. For some of the earlier books, the private press technology was the mimeograph. As Scott Brown explains, “They did not choose inexpensive and found materials like the arte povera (poor art) artists did (while surrounded by the best materials in the world in Italy). These Cuban book artists work with the only materials available to them and have explored their artistic possibilities for decades.” He continues, quoting Rolando Estévez of Ediciones Vigia, “We are advocating for the appreciation of poor, ugly, and cheap things.”

Brown, who admits that his primary interest is not in the cultural and ideological aspects of the books, notes that customers in his shop, unaware of the politics all things from Cuba bear, “are immediately enchanted and absorbed.” He continues, “the books are free of guile, artifice, and cynicism. They are not intellectual, they are emotional. They radiate passion and invention.”

The three book makers whose works are offered are:

Ediciones Vigia – formed in 1985 by Alfredo Zaldivar and Rolando Estévez. Typical print runs are 100-200 copies. It publishes both the works of local writers and well-known American and European writers. Located in Matanzas. It is “the best known inside and outside of Cuba.”

Ediciones El Fortin – Also located in Matanzas, it is a spin-off from Ediciones Vigia. It was formed in 2014 by Rolando Estévez who left the other publisher that year. Print runs are usually under 50 copies.

Cuadernos Papiro – started in 1994 as a papermaking collective, it began publishing books in 2001. Makes its own papers from recycled materials and uses a linotype machine for which they need to fabricate their own replacement parts when it breaks down (like with those old cars). Located in Holguin.

These are examples of what you can find in this catalogue:

Cuerda Del Aire (air rope) by mother and daughter Barbara Cruz Lopez and Patricia Rodriguez Cruz. One of 200 copies published by Ediciones Vigia. The cover displays a stylized image of a caterpillar emerging to become a butterfly. The covers use elements of a collage, various types of hand-colored paper, yarn and coarse fibers as a metaphor for a caterpillar becoming a butterfly. A pocket on the back cover holds a small chapbook entitled Secretos de Jardin (secrets of the garden). Priced at $200.

Two Homelands by 19th century Mexican writer José Marti. This is from Cuadernos Papiro and is a rare title in English only. The translator is unknown. The book was printed on three types of handmade recycled paper. The covers are recycled paper with fibers added. $200.

To love a Country: A Triptych of Poems / Amar un Pais. Un Triptico de Poemas published by Editiones El Fortin. Author Richard Blanco is an American of Cuban heritage. Includes the poem One Today which Blanco read at Barack Obama's second inauguration. There are two hand-colored fold-out illustrations, a hand-colored title page, and paper collages on the covers. Designed and illustrated by Rolando Estévez. $500.

One major difference between Cuban handmade books and those from western nations is the price. Presumably, American dollars go much farther in Cuba, so for a few hundred dollars I am seeing books I would expect to see in the thousands. Some of it relates to not using expensive papers and such, though I imagine much of it is explained by lower financial expectations of Cuban artists. Collectors are the beneficiary. Anyone who collects the book arts should have something from these selections. I don't know what the availability of the catalogue itself is, it being a work of art requiring much handwork. There were only 100 copies created. If you can get one put it in your collection. It won't hurt to ask.