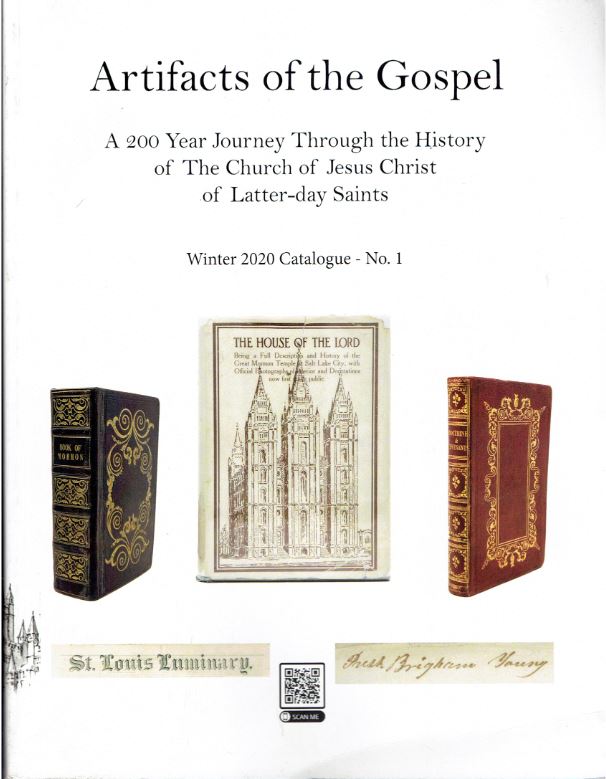 200 years of history of the LDS Church.

Artifacts of the Gospel has published a magnificent catalogue of A 200 Year Journey Through the History of the Church of Jesus Christ of Latter-day Saints. The timing refers to Joseph Smith's vision 200 years ago that all things would be restored to earth as they once were. This catalogue is almost 400 pages with 360 items beautifully illustrated in full color. It contains most of the church's major works, including the Book of Mormon in many editions. Most of what is here comes from within the church but there are also observations from writers from the outside, even a few who attacked the Mormon church. Most texts are theological in nature, but works also are found related to their history and the settlement and home they built near the Great Salt Lake and Utah. There are also a few books by or relating to splinter groups from the main church, most notably the Reorganized Church of Jesus Christ of Latter Day Saints.

Items related to the LDS church are highly collectible. Presumably, church members are the major collectors though this is not necessarily the case. Either way, this is highly desirable material. As such, it can be difficult to find in the market. This catalogue affords collectors of LDS books and artifacts an opportunity all in one place. These are just a few samples of what can be found.

There is no other place to start than with the foundational document of the faith, the first edition of the Book of Mormon. The full title is The Book of Mormon: Written by the Hand of Mormon upon Plates taken from the Plates of Nephi, published in Palmyra, New York, in 1830. While this is an extremely valuable book in monetary terms, it is surprisingly not a rare one. That attests to how much it is sought by collectors. Demand still outstrips supply even if it is not particularly rare. This copy has been signed by W. Otis Osborne about whom I can find nothing definitive other than it appears he lived in upstate New York as did Joseph Smith at the time but remained there the rest of his life. Item 13. Priced at $125,000.

For those wishing a connection with the original book but lacking the means to purchase a first edition, there is a leaf book available entitled The First Mormon Book: A Celebration of the 1830 Book of Mormon with an Original Leaf. This was published in 2000 in a limited run of 290 copies and includes the leaf of page 384 from the first edition. It also contains an essay by Peter Crawley. Item 14. $1,200.

Artifacts of the Gospel also has other early editions of the Book of Mormon available. Item 20 is a second edition, published in 1837. It was published in Kirtland, Ohio, after the Saints first move west. $37,500. Item 26 is a third edition, published in 1840. This was published in Nauvoo, Illinois, representing two further moves as the Saints sought to find protection from hostile neighbors. None of them worked, leading to the final migration to the valley of the Great Salt Lake where no others (besides Native Americans) were around to harass them. $27,500.

After moving to Nauvoo, church leaders determined to build a great temple. Plans were drawn and the cornerstone laid in 1841 under the supervision of church founder Joseph Smith. Construction continued over the next few years but relations with neighbors again turned very sour. In 1844, Smith was killed by locals. Soon it would become obvious that they could not stay. Nonetheless, leader Brigham Young pushed for the temple's completion so certain ceremonies could be conducted before the Saints abandoned their increasingly hostile locale for the farther west. Three months before its completion, most followers left, but a few remained to complete construction so that it could be dedicated before they too left. That was in 1846. Item 31 is a daguerreotype photograph of the temple seen at a distance, other buildings in the foreground, taken in 1846. It is a C.W. Carter carte de visite, believed photographed by Lucian Foster. After the last of the Saints left, the temple was vandalized, and sold in 1848. Later that year, the temple was mostly destroyed by a deliberately set fire, and while the buyer decided to rebuild it, a tornado practically finished it off in 1850. The last remains were torn down by the city in 1865. $9,000.

Unfortunately, sensationalism prevails, and the one doctrine for which the LDS church became most famous among outsiders was polygamy. Joseph Smith approved of the practice in the 1830s and his revelation was read to the congregants in 1843, but it was mainly the private business of certain men. Nonetheless, it became well-known and was part of the cause of the hostility of neighbors who regarded it as sinful. In 1852, church leaders made a decision that perhaps with the benefit of foresight they would not have made. At a leaders' conference they issued a proclamation to put the doctrine in the public record. Item 56 is the Deseret News Extra from September 14, 1852, a special separately published pamphlet of the minutes of the conference. Among the topics was the official sanctioning of polygamy. While the practice has never been officially repudiated, in 1890 the church issued a manifesto advising against further polygamous marriages, and in 1914, with Utah confronted by the federal government which forbids the practice, the church issued a second manifesto demanding an end to all such marriages. $7,500.

Many have tried to create a simpler way of writing the English language, its bizarre spellings making it an unnecessarily difficult language to read and write. As sensible as that sounds, no one has managed to convince readers to adopt a simpler, phonetic spelling, and not even Brigham Young, with all his influence among the Mormon community, was able to succeed. He tried. In 1854, he convinced the church to design a new set of phonetic letters in which to write English. It contained 38 letters. He hoped it would make it easier for foreign converts to read English (and perhaps make it more difficult for outsiders to read their works). The church published four books in the Deseret alphabet. One of them was The Book of Mormon. I cannot write this out for you as my keyboard lacks Deseret characters, which look more like cyrillic letters to me. It was published in 1869. Soon thereafter, the church gave up on trying to convince their followers to use this invented language. Item 100. $7,500.

Long after the death of Smith and even Young, who died in 1877, David Whitmer survived. Whitmer was one of the Three Witnesses who attested to seeing the golden plates containing the Book of Mormon as described by Smith in a vision. His testament is still found in most copies of the Book of Mormon published today. This was in 1829, prior to the formation of the church or the publication of the Book of Mormon. In 1887, Whitmer, now 82 years old, published An Address to All Believers in Christ. His reason for the address was to explain the Book of Mormon and the Restoration to non-Mormons and to unite the faith's scattered believers. Item 154. $1,000.

This book is as beautiful as it is rare. It is both. The title is Sun Pictures of Rocky Mountain Scenery, with a Description of the Geographical and Geological Features, and Some Account of the Resources of the Great West; Containing Thirty Photographic Views Along the Line of the Pacific Railroad, From Omaha to Sacramento, published in 1870. The writer was Ferdinand V. Hayden, though the pictures were taken by Andrew J. Russell. The purpose of the book was to celebrate the completion of the Pacific Railroad. However, geologist Hayden was primarily interested in the geology along the way, which he describes, while Russell was focused on creating artistically beautiful photographs. While the book covers views from Nebraska to California, it should be noted that 16 of the 30 pictures were taken in Utah. Item 107. $15,000.

Artifacts of the Gospel may be reached at 315-702-6657 (call or text) or info@artifactsofthegospel.com.