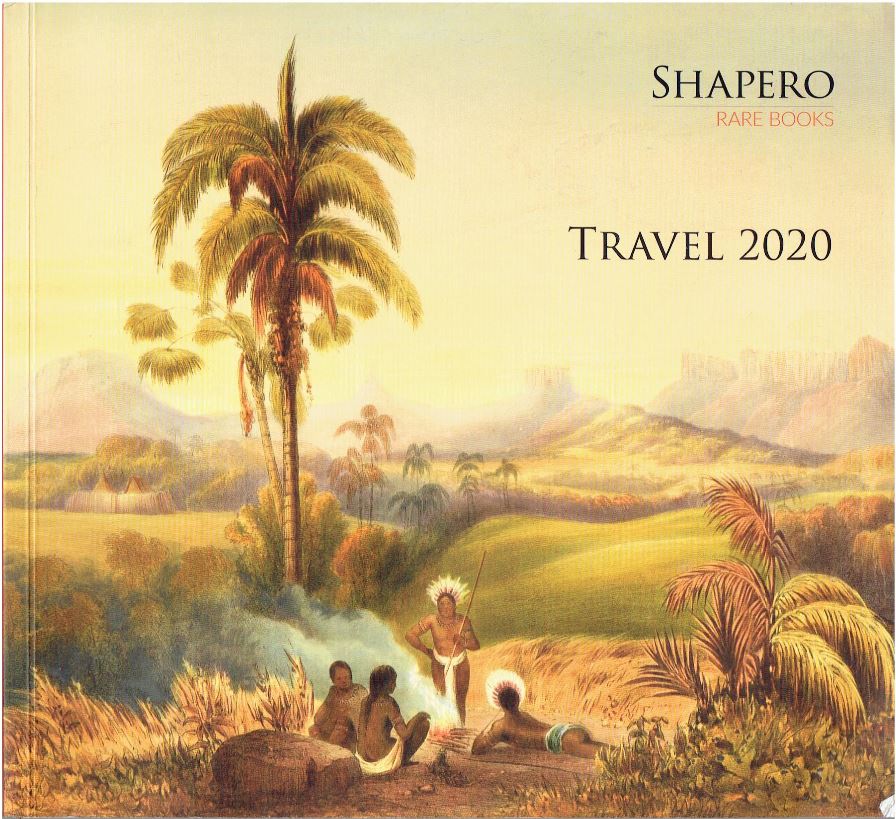 Shapero Rare Books has proved to be the rare exception, still issuing printed catalogues during the coronavirus epidemic. It is a welcome relief to be able to open a tangible book. The title of their latest is Travel 2020. The catalogue is from 2020, the travels are not. Those are all much older, often very much older. They primarily started from England and continental Europe, and went all over the world. Some were for exploration, others for government or military reasons, some for trade, and others just private adventurers out to see the world. Shapero has divided their catalogue into sections based on destination. Here are those destinations: Africa, Americas, Central Asia, East Asia, Europe, and Voyages & Polar. So, put on your mask, remember to maintain a social distance, and off we go to see the world.

We begin with one of the very old travels. This is an account of China in the 16th century, a place practically unknown to Europeans at the time. This book proved to be the major source of information about that land to the West for a while. The title is Nova et succincta, vera tamen historia de amplissimo, potentissimoque, nostro quidem orbi hactenus incognito, sed perpaucis abhinc annis explorato Regno China. It was written by Juan Gonzalez de Mendoza, an Augustinian. This is a first Latin edition, published in 1589, the same year as the German first edition. Much of our early knowledge of countries outside of Europe comes from missionaries of the various Catholic orders, whose aim was to convert the inhabitants of these far off lands, but who served as being explorers and historians on the side. Gonzalez de Mendoza set out to visit China in 1580, by a route that took him first to Mexico. However, it was discovered not to be a good time to go to China, so he remained in Mexico until returning to Spain in 1582. Juan Gonzalez de Mendoza never actually set foot in the land about which he wrote. He compiled his account from the reports of other missionaries. It covers religious beliefs in China, but also many other topics such as politics and education. It is also one of the first western books to contain Chinese characters. Additionally, there is a section on the discovery of Mexico and other parts of the New World. Ironically, although this is one place de Mendoza actually did visit, it is a translation of the work of Father Martin Ignacio, which was never published separately. Item 76. Priced at £4,000 (British pounds or approximately $4,878 in U.S. dollars).

This is one of those books with a very l o n g title (hereby reduced): A Voyage Round the World in His Majesty's Ship the Dolphin, Commanded by the Honourable Commodore Byron. In Which is Contained, a Faithful Account of the Several Places, People, Plants, Animals, &c. Seen on the Voyage: And, among Other Particulars, a Minute and Exact Description of the Streights of Magellan, and of the Gigantic People Called Patagonians. Published in 1767 (this is the Dublin edition), it is attributed to “an Officer on Board the said Ship.” That is now generally accepted as being Charles Clerke, a midshipman. Clerke would go on to sail on all three of James Cook's voyages and took over command on the final journey after Cook was killed by natives in Hawaii. John Byron had been set to scout out the territory around South America and try to find an island where the British could set up a presence, the mainland controlled mostly by Spain. Byron claimed the Falkland Islands for Britain, unaware that the French had already done so. Byron completed his circumnavigation in 22 months, the fastest time to date, no one before having completed the journey in under two years. This book perpetuated a myth dating back to Magellan, that there lived a race of giants in Patagonia. That account claimed they were up to 12 feet tall. By this time, their height had been reduced, though still greatly exaggerated, to 8 feet. They are depicted on the frontispiece, and look to be more like 10 feet tall in the image. Item 119. £1,500 (US $1,829).

Exploration in Africa during the early 19th century was extremely dangerous, and not primarily because of hostile inhabitants. Malaria and other diseases were rampant and Europeans often succumbed to the pestilence. Hugh Clapperton went to sea at the tender age of 13 and within a few years was in the British navy. He was selected to accompany Walter Oudney who was to be consul to Bornu, an uncharted place in today's Nigeria and Chad. They made it there and then proceeded on toward the Niger River, whose route was still unknown. Oudney died shortly thereafter, but Clapperton continued on, until forced by local officials not to proceed when only five miles from his destination. Clapperton barely survived to make it home, but soon was sent on another mission to the Niger via a different route. This time he was accompanied by two officers, Capt. Pierce and Dr. Morrison, along with his servant, Richard Lander. Within a month, both Pierce and Morrison were dead. Clapperton pushed on, crossing the Niger near the place where explorer Mungo Park had died 20 years earlier. He intended to return via Bornu but war had broken out. He was held captive for a few months before malaria and dysentery caught up with Clapperton too. He died in 1827 at the age of 38. Lander survived and made it back to England with Clapperton's records. In 1830, Lander published this report, Records of Captain Clapperton's Last Expedition to Africa. That same year, he returned to Africa with his brother and was the first to determine the river Park, Clapperton and others investigated was the river that terminated in the Niger River delta. Its long, circuitous route, heading northeast before abruptly switching directions to southeast, had everyone confused. He, too, succumbed in Africa four years later, but he died from a gunshot wound. Item 12. £450 (US $548)

Fanny Bullock Workman was born to a wealthy family. Her husband, William Hunter Workman, was a Worcester, Massachusetts, physician, like his father. He too was not short on money. This came in handy when Workman had to retire from his career as a physician after 13 years because of ill health. They set off for Germany for his recovery. There, the couple began several bicycle trips that would have been grueling for a healthy person, all over Europe, the Middle East as far as India, and northern Africa. They wrote several popular books together about their adventures. That led to their next strenuous activity – mountain climbing. They had hiked in New Hampshire and then the Alps, but that led them to take on the Himalayas. Item 91 is their account of one of their trips, in 1902-1903, published in 1908 – Ice-bound Heights of the Mustagh an account of two seasons of pioneer exploration and high climbing in the Baltistan Himalaya. Illustrations were created from their photographs. In a return to the Himalayas in 1906, Fanny Workman set an altitude record for a woman hiker – 23,000 feet up Pinnacle Peak at the age of 47. £400 (US $488).

This is not a typical travel book, but the author of these memoirs did a lot of traveling around. John Dunn Hunter said he was captured by the Kickapoo and lived with various Indian tribes until the age of 19. He said he had no recollection of his previous life. The name “Dunn” came from a later English benefactor, “Hunter” from his particular skill. His book is entitled Memoirs of Captivity Among the Indians of North America, from Childhood to the Age of Nineteen and was published in 1823. Hunter went to England and published his account of his life with Indians, but by 1825, he was back in Texas. From there he attempted to obtain a land grant from Mexico for the Cherokee Nation, but was unsuccessful. That led to his hatching a plot with Anglo settlers, the first attempt to seize land from Mexico. It was known as the Fredonian Rebellion, and the idea was that Anglos and Cherokees would cooperate in the rebellion and then divide up the land. When the rebellion failed, the Cherokee said they had nothing to do with Hunter, tracked him down, and executed him in 1827. Item 29. £750 (US $919).