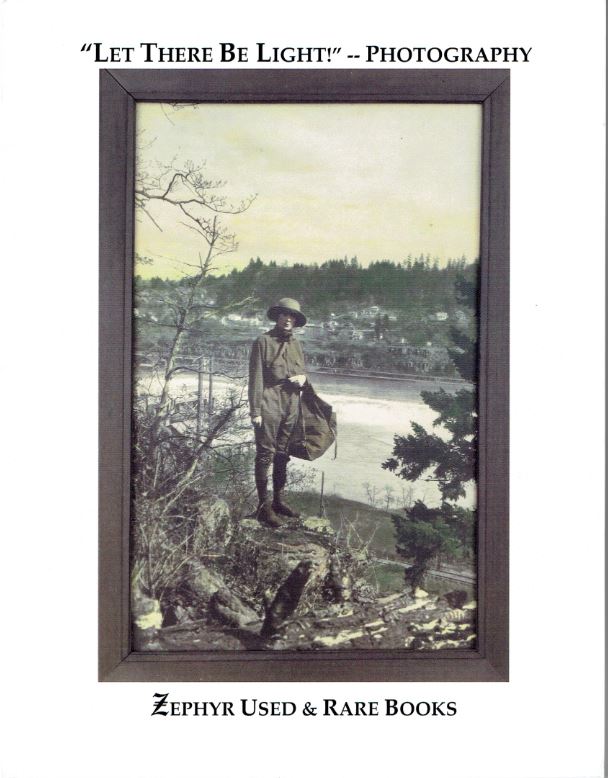 Zephyr Used & Rare Books has published a catalogue entitled Let There Be Light – Photography. These aren't mostly individual photographs, but large assemblies of them. Many come from businesses, either in the form of salesman's catalogues or accounts of corporate histories. Others were compiled by individuals, often on trips or vacations. Some of these include many hundreds of photographs. These are a few of the collections of photographs being offered by Zephyr.

We start with an archive of photographs from Boeing and associated companies in the aircraft business. That includes their United Airlines. The 148 photographs range roughly from 1925-1939. Boeing had been close to bankruptcy at the end of World War I, but this period saw enormous growth by the firm. They achieved great success as a mail carrier and builder of military aircraft. The company eventually evolved into being primarily a builder of commercial aircraft, but by the 1930s they had their hands in numerous related business, including passenger travel. There are numerous photographs of airplanes Boeing designed and built, some of which went into production, others more experimental that never went any further. Military planes are common. Other photographs show production lines, the inside of factories, and Boeing executives. Item 6. Priced at $6,750

Next is an archive of 711 photographs that documents one of the most important developments in travel safety and speed. It also includes various documents, diagrams, blueprints and other material. The invention was the rail car air brake system designed by the Westinghouse Air Brake Co. Prior to this invention, brakemen had to jump from car to car to set the brakes. It was a dangerous operation and limited the speed at which trains could safely travel. George Westinghouse's invention connected the cars to a single braking system that allowed for trains to travel safely at higher speeds. His invention quickly became enormously popular with railroads, first with passenger cars, but later expanding to freight cars as well. These photographs were taken from 1900-1952. By 1905, over 2 million passenger and freight cars and 89,000 locomotives were equipped with the system. There are numerous pictures of the equipment the firm made, but more than half of the photographs are of employees, particularly those taken at annual reunions held for veteran employees. Item 54. $6,900.

Item 36 is a collection of 25 photographs taken of the Great Kanoto Earthquake of 1923. It resulted in extensive damage to Tokyo and Yokohama. It measured 7.9 on the Richter scale. An estimated 142,000 people died as a result of the quake and ensuing fires. The pictures were taken by the Nippon Dempo news agency. These photographs were in the possession of the Nippu Jiji newspaper in Honolulu. The photographs show broken roadways, a ship deposited inland along some railroad tracks, collapsed buildings and bridges, and burned out buildings and smoking ruins. One shows thousands of refugees huddled with their possessions. $425.

This collection of photographs was taken around Spray Park National Forest and Mowich Lake along the edge of Mt. Ranier National Park in Washington State in 1911. The scenery is beautiful and the photography professional grade. The 93 photographs were taken by John L. Hessong, who had a studio in Kapowsin, Washington. Zephyr notes that Hessong has been long forgotten, none of his pictures having been found in institutional collections and this being most of his known photographs still in existence. Along with scenery, private cabins, and a photograph of two girls, presumably Hessong's daughters, holding a rifle, there are numerous pictures of logging operations by the Kapowsin Lumber Co., a division of St. Paul & Tacoma Lumber Co. Item 43. $1,500.

Next is an album of a month-long around-the-world cruise on the Cunard Line ship the RMS Franconia. Does anyone dare go on a cruise today? The year was 1938, and that year had its dangers too, even if it wasn't a virus. Rather, there was the threat of war. They were able to avoid that threat by undertaking the voyage in the Southern Hemisphere. Stops included Trinidad, Brazil, St. Helena, South Africa, Madigascar, India, Malaysia, Singapore, Thailand, Vietnam, and the Philippines. However, even the southern route had to be changed because of war. Normally, the liner would have visited China and Japan, but those stops had to be changed due to the Second Sino-Japanese War. Instead, the focus was on Malaysia and Southeast Asia. Scenes of places where they stopped are among the 97 photographs, including the Taj Mahal. This would be the last around-the-world cruise for the Franconia as she was converted to a troop transport ship the following year. Item 51. $1,650.

Item 57 is a soft cover souvenir book from the Klondike Gold Rush. Published in 1897, the title is En Route to The Klondike: Chilkoot Pass and Skaguay Trail. It was created by Frank La Roche and features his photographs. The pictures show the miners arriving via steamer, picking up their supplies, Native Americans freighting their supplies to the gold fields, and the treacherous journey over Chilkoot Pass. Item 37. $550.