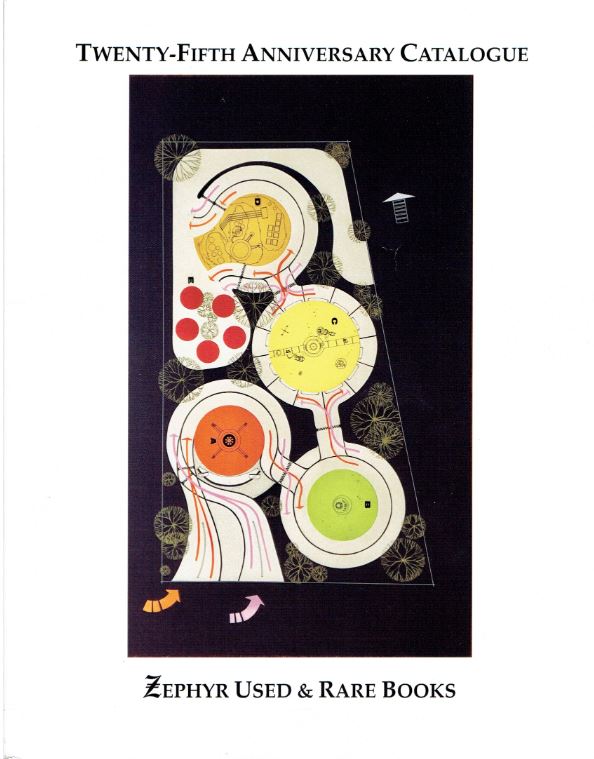 Zephyr Used & Rare Books has published their Twenty-Fifth Anniversary Catalogue. Zephyr offers a mix of items, some books, lots of ephemera, which usually reflect the culture and concerns of their times. Zephyr describes some of their specialties as advertising, travel, photography, design, sample catalogues, automobiles, a myriad of trade catalogues, and curiosities. These are a few of the curious items you will find in this latest selection.

We will begin with a book that will appeal to those who like Edward Ruscha's panoramas of Hollywood, Sunset Strip, and a lot of gas stations and palm trees. However, this is much older, and will cost you one heck of a lot less. Published in 1932, the title is Atlantic City. World's Premier Year 'Round Health and Pleasure Resort: Book of Views and Unique Copyright Panoramics World Famous Boardwalk... This promotional souvenir was published by the Auditorium and Convention Hall for the yearly trade show known as “American Fair.” It displays all of the hotels, restaurants, stores, dance halls, theaters, and more along the Boardwalk. Unlike Ruscha's work, only one side needed to be photographed as the ocean is located on the other side of the boardwalk. Atlantic City has long been a place to escape the worries of the day, and there would have been many in 1932, the midst of the Great Depression. There are five large fold-outs and a tipped-in one suitable for framing. Item 15. Priced at $325.

Here is a popular children's book from the 1950s that included a few tipped-in pieces to make it more interesting. Alternatively, you could look at this as an advertisement disguised as a children's book, designed to brainwash children into selecting a particular product brand. If the latter, it probably was very successful as to this day, many of us refer to bandages as “band-aids,” which, like Kleenex, is actually a brand name. It is a Little Golden Book entitled Doctor Dan. The Bandage Man. It accompanied another Little Golden classic, Nurse Nancy, which sets the tone for gender roles in the 1950s. Published in 1950, the author was Helen Gaspard, drawings by noted illustrator Corinne Malvern. In the story, young Dan's mother places a Band-Aid brand bandage on him. Dan finds it all so exciting that he starts placing Band-Aids on every one and thing, sister, father, dog, dolls and stuffed animals. The pages show all the colorful sizes and shapes of Band-Aids available, enough to make any kid want to have a few scratches to bandage. The book came with six real bandages from Johnson & Johnson tipped in. Those were innocent times, when Johnson & Johnson was selling Band-Aids rather than opioids. This book was reprinted in 1992, but the finance department must have taken an ax to their budget as only two Band-Aids were included then. Item 69. $150.

To everything there is a time. Unfortunately, 1907 was not the time for this catalogue. Item 147 is a catalogue for the Pontiac, Michigan, carriage maker Union Buggy & Harness Co. The catalogue offered a wide variety of carriages including specialty ones for trades such as milk delivery, bakeries, and mail, but after all, this was 1907. Horse-drawn carriages were quickly being replaced by automobiles, a product with which the city Pontiac would soon be associated. The firm was owned by brothers Harry and Frank Jacobs. We don't know what happened to it, but it probably did not survive for long as by 1910, each of the brothers was employed by other companies. Item 147. $250.

William Paterson was also in the carriage business, an old-timer, having entered the trade in 1869, and in his 60s by the turn of the century. However, he did realize automobiles were the future, and began their manufacture in 1909, when he was 71. By the following year, he had stopped making carriages. His cars started as basic, two-cylinder motor cars, but by 1915, had six-cylinder engines and was a more luxurious brand. Item 33 is a dealer's catalogue for Paterson Motor Cars from 1912. The company was located in Flint, Michigan, but had dealers in every state. This catalogue bears the stamp of their dealer in Syracuse, New York. Paterson died in 1921, and his son was not able to continue the business successfully. He sold it to a dealer in 1923, but it quickly went out of business. However, their headquarters, the Paterson Building in Flint, still stands, primarily housing offices today. Fewer than 100 Paterson automobiles are believed to survive. Item 33. $275.

Next is a spectacular pictorial view of northern Oregon published in 1912. The title is Art Work of Portland, Mt. Hood and the Columbia River. This is the Edition De Luxe. The author was Eva Dye, a noted historian of the Pacific Northwest. She was an early proponent of recognition of Sacajawea for her role in the Lewis & Clark Expedition. Most notable are the photographs by Benjamin Gifford, perhaps Oregon's most famous photographer. There are 80 plates, some with color tinting, in the nine volumes that complete this set. Along with the scenes described in the title, there are many photographs of Indians, the reconstructed Fort Astoria, and the Forestry Building at the Lewis & Clark Centennial Exposition. Item 117. $1,500.

Item 122 is a placard for an Edison Kinetoscope machine from 1904. In the pre-motion picture days, the kinetescope was a device that one person at a time could look into to see moving images which created the illusion of motion. This one taught you a few lessons about body building. All you had to do was “Put one cent in the slot and get a lesson in physical culture.” The card stock placard announces, Treloar Ex-Harvard Varsity Oarsman. Winner of the $1000 Prize for the Most Perfectly Developed Athlete in the World in Home Exercises for Muscle-Building. Treloar, the Charles Atlas of his day, shows some poses and exercises we all can do. Treloar was for over 40 years the director of physical culture at the famed Los Angeles Athletic Club. $650.