Old and Rare Books from Erasmushaus 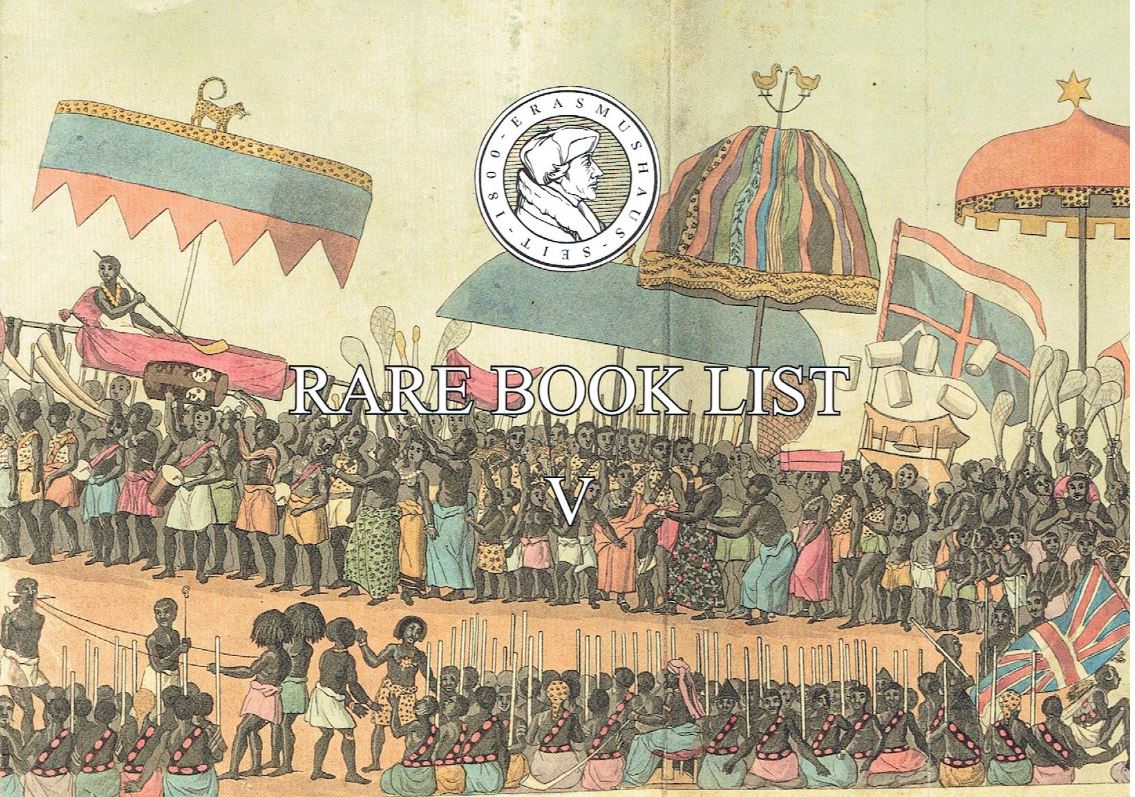 Erasmushaus has issued their Rare Book List V. Erasmushaus offers a wide range of material, the focus being on the antiquarian, often very early in printing history. They are a Swiss bookseller, and there being no such language as Swiss, they naturally draw from a variety of sources. Some were published in Switzerland, others elsewhere in Europe, while the languages are as varied as those spoken in Switzerland. Here are a few of the selections from this latest catalogue.

We begin with the item which presented that amazing picture on the cover. Item 6 is Mission from Cape Coast Castle to Ashantee, with a Statistical Account of that Kingdom, and Geographical Notices of Other Parts of the Interior of Africa. Published in 1819, the author was Thomas Edward Bowdich, an English traveler whose uncle was Governor of the British settlements on the African Gold Coast. The inland territory, then known as the Ashanti Empire, is part of what is today Ghana. Bowdich's uncle got him an appointment and he traveled to visit the Governor of Accra as an emissary of Britain. He was able to secure a treaty between his country and the Ashanti King, a first for the British. On returning home in 1818, Bowdich began writing his description of the Ashanti Empire and its culture. It proved so popular that it quickly was translated to several other languages. Europeans knew next to nothing about most of Africa then. Unfortunately, Bowdich returned to Africa in 1824 to explore other areas, contracted malaria, and died. Priced at CHF 1,800 (Swiss francs, or approximately $1,813 in U.S. dollars).

René-Antoine Ferchault de Réaumur may not have picked a favorite type of animal to describe and illustrate, but all animals deserve a time to shine. Réaumur wrote about insects. In fact, he published six volumes on them one at a time between 1734-1742. The title is Mémoires pour servir à l'Histoire des Insectes. Réaumur wrote about and studied many subjects. As a young man, his focus was on mathematics and geometry. He later gravitated to sciences, including this extensive study of insects. Erasmushaus notes, Réaumur “applied in his six large volumes on insects, precise observation, detailed experimentation, and accurate recording to phenomena as varied as social life, parasitic habits, and leaf-mining.” The volumes contain 267 plates by Philippe Simonneau and Helene du Moustier de Marsigli. Item 45. CHF 3,500 (US $3,514).

Next we have another book on insects, but this one is more suitable for English speakers. The title is The Book of Nature, or the History of Insects. The author was Jan Swammerdam and it was published in 1758, though this was almost a century after it was written. Swammerdam was a Dutch physician and biologist whose attention after medical training quickly turned to insects. He published a book on them that was widely read as he became expert on a life form in which few had much interest in the 17th century. His Book of Nature was a more thorough study of insects, as he made discoveries such as that they propagate by eggs, have internal structures similar to other animals, that it is the same animal at the conclusion of metamorphosis, not a new being. He also studied muscles and what makes them contract. Unfortunately, he never got to publish his second work. Swammerdam died at age 43, his book still in manuscript form. It remained in private hands until purchased by Dutch physician and botanist Herman Boerhaave. Boerhaave understood its importance and ten years later had it published. It was later translated to English, edited by John Hill, with a biography of the author written by Boerhaave, and with notes added by the author of the previous item, Réaumur, and others. Item 50. CHF 2,800 (US $2,811).

This one is for people who do not like insects. It comes from Charles Darwin, and it is evolution's ultimate revenge on bugs. The title is Insectivorous Plants, published in 1875. These are the plants that eat insects instead of the other way around. Most familiar is the Venus flytrap that quickly surrounds an insect that lands on it, trapping it. It then, in a manner of speaking, eats the bug. Actually, it skips the chewing and swallowing stage and the trap acts like a stomach, generating digestive juices to digest its prey. This evolutionary adaptation is found in areas where the soil is poor in nutrients, enabling the plant to supplement what it gets from the ground with an occasional piece of meat. Item 14. CHF 800 (US $803).

Jacques Cazotte was an 18th century French writer who some consider the originator of the fantasy novel. He wrote numerous books, but this is his most famous, Le Diable Amoureux (the Devil in love). The Devil falls in love with a young Spanish gentleman, changing its appearance to that of a seductive woman. It combines fantasy, the occult, with the eternal battle between good and evil. It was published in 1772, and in the years ahead, Cazotte drifted further into exploration of the occult. He died in 1792, and any deaths in France during that year immediately raise suspicions. Our fears are justified. While he wouldn't seem to be a controversial figure, Cazotte wrote some letters that were deemed counterrevolutionary. That's all it took during the French Revolution. At the age of 72, Cazotte had his head chopped off. Item 9. CHF 3,500 (US $3,514).