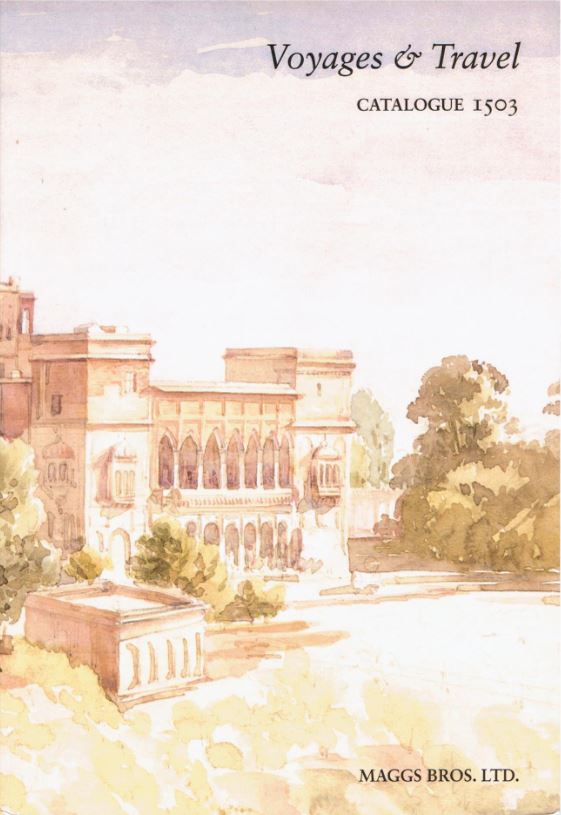 Maggs Bros. Ltd. has released a catalogue of Voyages & Travel, Catalogue 1503 in their long-running series. These mostly relate to travels of the exploratory type, though we find other "visits" that were based on military excursions. A great many come from Europe, Maggs' home base of England in particular (as of this writing, England is still officially part of Europe). However, a few begin elsewhere and some relate to trips to, rather than from, Europe.

Maggs has broken the catalogue into sections so collectors can find specific geographical locations of interest. Here they are: Africa; Egypt, The Near East & Middle East; Europe, Russia, Turkey; India, Central Asia & The Far East; Australia & The Pacific; Central & South America; North America; Alaska & The Poles. There is not much left out there. Here are a few examples of what can be found.

If you were traveling to Africa a long time ago, you would have wanted this book. Item 12 is Geographia di M. Livio Sanuto distincta in XII libri. This was the first printed atlas of Africa, published in 1588. As a caution, I would not rely on this too heavily, particularly with regards to interior Africa. What was known then was limited, and while Sanuto's work was an improvement over his predecessors, much was still estimates if not guesswork. His atlas provides extensive textual information concerning Africa, both geographical and about its people. Parts relate to places outside of Africa. Being an atlas, of course it contains maps, 12 in all, one of the entire continent, 11 detailed reproductions of parts of the continent. Sanuto's ambitions were extensive. He planned to produce a world geography, and scholars believe it would have been a spectacular creation had he done so. Unfortunately, he died shortly before finishing the first part of his project, the work on Africa. It was completed and brought to press by Damiana Zenaro. Priced at £30,000 (British pounds, or approximately $37,265 in U.S. dollars).

This item relates to some Americans' trip to Germany, but this was hardly a pleasure trip. It took place during World War II and American troops had recently invaded Germany. The countdown was on and it was just a matter of time until victory was secured. On September 28, 1944, Supreme Allied Commander Dwight Eisenhower issued this proclamation. With one side of the broadside in English, the other in German, it is headed Military Government - Germany Supreme Commander's Area of Control Proclamation No. 1. It is addressed "To The People Of Germany." It includes the line, "We come as conquerors, but not as oppressors..." Writes Eisenhower, "We shall overthrow the Nazi rule, dissolve the Nazi Party and abolish the cruel, oppressive and discriminatory laws and institutions which the Party has created. We shall eradicate the German Militarism which has so often disrupted the peace of the world. Military and Party leaders, the Gestapo and others suspected of crimes and atrocities will be tried and, if guilty, punished as they deserve." The exact date of this printing is unknown, but a code indicates it is consistent with a November 1944 printing in Italy. Item 33. £5,850 (US $7,269).

Here is an item targeted to some more long-distance American visitors who undoubtedly didn't want to be where they were. In 1918, America sent some 5,000 soldiers off to intervene in the Russian Revolution. Britain and France had requested U.S. help in guarding war supplies they had in Russia. They wanted to protect them from both the Germans and the Bolsheviks, who had gained the upper hand. Even after the War to End All Wars ended, the soldiers still found themselves in the cold of Russian winter, not sure why they were there. The Russians must have figured them ripe for desertion as they printed this piece, Captalst America, Socalist Russia. It was written by "the group of English speaking Communists in Russia." They may have been English speaking Communists, but they weren't English spelling ones. The pamphlets explain how working people in capitalist countries are mere beasts of burden for the property owning class. It continues, "We did not fight our Revolution and overthrow our Tzar Nicholas Romanoff just to step under the tyranny of Tzars Morgan, Rothchild and Rockerfeller." It tells the Americans. "You can break away. We know that you can for we did. You are powerful enough and numerous enough to arrest the officers and do with them what you please... Refuse to be murderers of your own class." Item 42. £1,500 (US $1,862).

Here is an item I presume will appeal to collectors of African exploration. It is a pair of cartes de visite of Henry M. Stanley and David Livingstone. Both explored the distant recesses of the heart of Africa when the area was mostly unknown to Europeans. Livingstone explored in his role as a missionary while Stanley searched as a journalist. Stanley's greatest search was that for Dr. Livingstone, which brought him great fame. Maggs tells us that his line when finding Livingstone, "Dr. Livingstone, I presume?" was not spontaneous but well rehearsed. So much for that myth. Livingstone's picture is from 1860, long before he was found by Stanley. Stanley's came after, and he is dressed as he was when finding Livingstone. He probably was not famous enough to rate a carte de visite prior to this event. Item 1. £750 (US $936).

The "Show Me" state had something to show the folks in London back in 1842. Item 91 is a print by George Tyller caption titled Missouri Leviathan: the Reliquia of animal indigenous to North America (Exhibited at the Aegyptian Hall, London), Disinterred in the Year 1840. For those unfamiliar with the term "reliquia" (as I used to be), it is a Spanish word for relic. It is also a genus of butterflies, but I can't imagine that was the meaning intended since this leviathan is what we now know as a mastodon. There's not much similarity between those two creatures. When Albert Koch learned of the discovery of these bones, he quickly purchased the right to excavate them. He dug up a pile, put them together, created a pamphlet, and began displaying the skeleton. He first brought them to St. Louis, where he charged 50 cents to see them (a lot back then), then across the U.S., and finally to London. Koch was something of a showman out of the P.T. Barnum mold. He cheated. He used extra bones, and pointed the tusks outward rather than down and under to create a larger, more fearsome creature. His skeleton was double the size of the mastodon. Eventually, Koch sold his bones to the British Museum for a tidy sum. Museum staff quickly put the bones together in the correct order. £2,750 (US $3,437).