Raptis Rare Books Offers Items "For the Collection of a Lifetime" 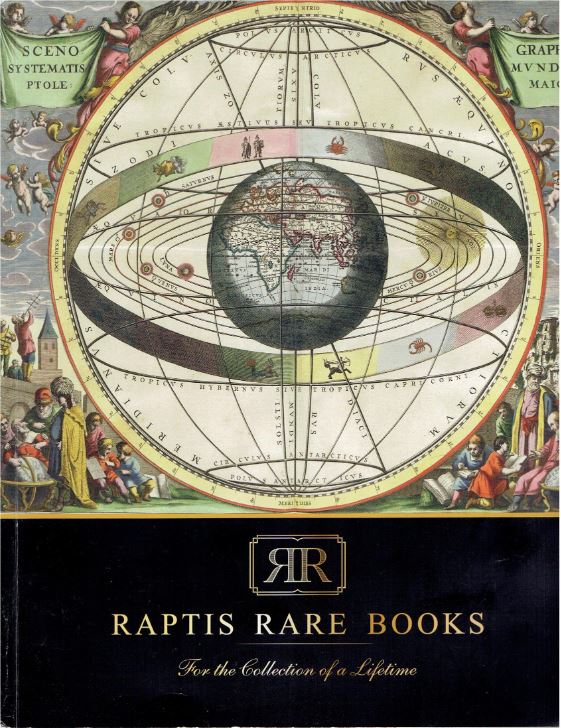 Books for the Collection of a Lifetime.

Raptis Rare Books has issued a new untitled catalogue "for the Collection of a Lifetime." Raptis does provide a table of contents to tell us what they have. Here it is: Cornerstones of Antiquity, Americana, History & World Leaders, Scientific Discovery & Exploration, Literature, Children's Literature, Sport & Leisure, Fine Art, and Economic & Social Policy. These are a few specific entries from this catalogue.

We will be hearing a lot in the days ahead about whether particular presidential candidates are "progressives." Here is the one about whom there is no doubt. He coined the term. We can only hope there is another Theodore Roosevelt out there somewhere. This is Roosevelt's most popular book, an account of his time in Cuba during the Spanish-American War. Roosevelt had an enormous sense of duty and adventure, and when war broke out, he and Col. Leonard Wood founded a volunteer cavalry nicknamed The Rough Riders, also the title of this book. It consisted mainly of cowboys, ranchers, outdoorsmen and athletes from the American Southwest. The nickname came from the long title of Buffalo Bill's western show, "Buffalo Bill's Wild West and Congress of Rough Riders of the World." Published in 1899, this book did much to enhance Roosevelt's already growing reputation. That was also the year that Vice-President Garret Hobart died. When President McKinley sought reelection the following year, New York's Republican party boss wanted the reforming Governor out of New York and engineered his nomination as Vice-President. When McKinley was assassinated the following year, Roosevelt became President. This copy of The Rough Riders has been boldly signed by Roosevelt. Item 90180. Priced at $9,800.

This was the sixth Oz book and intended to be the last. That is ironic as creator L. Frank Baum would go on to write 14 of them before his untimely death in 1919, and publisher approved successors would continue writing for many more years to come. Eventually, there would be 40 books in the "canon" of Oz titles accepted by Oz collectors as canonical. The title is The Emerald City of Oz, and it was published in 1910. In the story, Dorothy is back in Kansas with Aunt Em and Uncle Henry, but they are in deep financial trouble. The tornado that destroyed their house in the first Oz book required Uncle Henry to take out a large loan. However, they are running out of funds to make their payments and the bank is threatening to foreclose on the farm. Em and Henry are most concerned with what will become of their niece, as they are her only family. While neither ever thought of Dorothy's Oz stories as anything more than imagination, she concludes that she must save them, and that can only be done by whisking them off to the land of Oz. That she arranges, and after a battle with with a wicked king who sought to overtake the land, they end up in the Emerald City, a Utopian place where all can live happily ever after. If only it were so. Unfortunately, Em and Henry weren't the only ones experiencing extreme financial difficulties. So was Baum himself. He had invested in plays and films based on Oz but these had not been as successful as his books. Like Em and Henry, he had, so to speak, bet the farm on them. The result was that Baum had to continue writing Oz books the remainder of his life, and the series was so popular the publisher turned to other writers to continue it. This copy is inscribed to "Martha Kneedler, Having been presented by her own true lover L. Frank Baum August 1910." This is obviously a joke as Martha, daughter of Baum's close friend William Kneedler, who was President Taft's personal physician, was only 16 years old at the time. Perhaps if "Alice in Wonderland" author Lewis Carroll had written this it would raise a few eyebrows, but Baum gets a pass on his joke. Item 96123. $17,500.

Here is one of those books that could be called prescient. The title is The Coming of Post-Industrial Society: A Venture in Social Forecasting, by Daniel Bell. It was published in 1973. Bell predicted that the economy would shift from being dominated by manufacturing firms to those providing services. He foresaw success would depend on information, people using data, knowledge and intelligence to advance their businesses or their careers. Education would be the paramount determinant of success. Assembly line and other manufacturing jobs would wither. This is all in 1973. Not only was there no internet or smart phones pushing out reams of data at us every second, people didn't even have personal computers back then. We look at our most valuable businesses today, Microsoft, Apple, Google, Facebook - they provide services and information. The top five companies in 1973 included all of the "Big 3" auto companies. Bell saw where the world was going long before very many others, except, perhaps, those who read his book. Better late than never. This copy was inscribed by Bell on July 12, 1973. Item 18062. $2,500.

This is a rather amazing piece of Americana. I don't know whether to call it a textual document or a portrait. What it is officially is a typographic portrait. That is when letters on a document are lighter or denser, sort of like the dots on a halftone, to create an image. In this case, the image they create is a portrait of Abraham Lincoln. However, these are not just any letters that are used. As the heading over the oval portrait explains, Proclamation of Emancipation. This is a typographic portrait using the Emancipation Proclamation as text. It was designed and written by W. H. Pratt and published in 1865. Obviously, he must have admired the late President. Item 95831. $6,000.

Here is another work of art with several Presidents and other notable American portraits, though it is not a typical art book. Rather, this is an 1875 issue of the United States Treasury Department Vignette and Portrait Presentation Album. Along with portraits of notables such as Washington, Lincoln, Grant and Franklin, there are soaring patriotic images. Soaring quite literally, since the eagle is a common American symbol. Raptis notes that these are "some of the finest examples of 19th century American engravings." When you think about it, that is not surprising. These were used on banknotes, and the engravings had to be intricate engravings to make counterfeiting difficult. Item 96257. $8,800.