Something for Everyone - A Miscellany from Forest Books 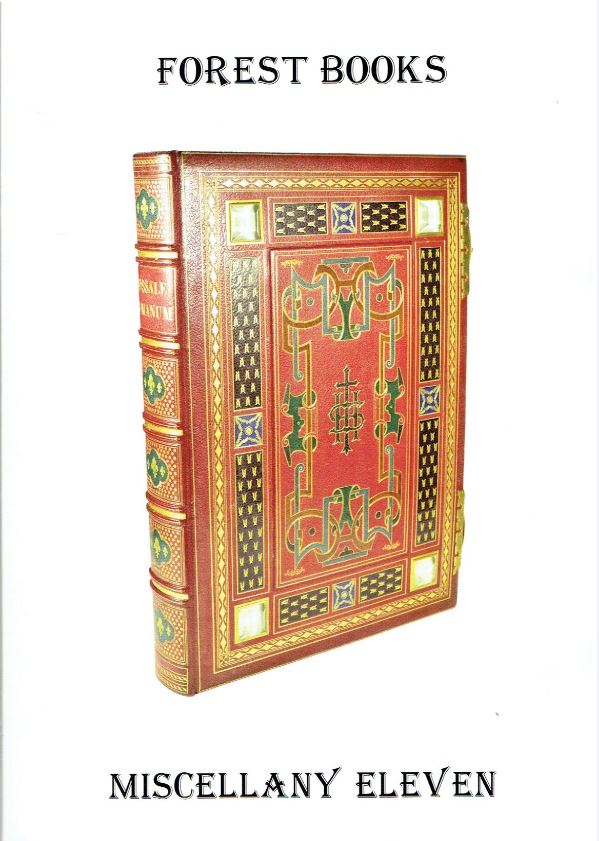 Forest Books has issued a catalogue with the short title of Miscellany Eleven. Now for the long title, which tells you in great detail what you will find. Here we go: Catalogue of Rare and Curious Books, Pamphlets & Printed Ephemera on a Wide Variety of Subjects. Including: Agriculture, Architecture, Bindings, Botany, Children's Books, Crime & Law, Cookery, Economics, Education, English Literature, Farriery & Equestrian, The Fine Arts, Geology, Horticulture, Ireland, Military & Naval, Natural History, Photography, Social Sciences, Science & Medicine, Sporting Books, Technology, Travel & Topography, etc. What more is there to say? When a catalogue lists farriery as one of its categories, you know it must have everything. No, I don't, or didn't, know what it means. I looked it up. It refers to equine foot care. If you collect equine foot care, Forest has you covered. If you collect anything else, they've got you covered too. Here are a few samples of non-farriery items.

We begin with a biography, but it is not of some great scientist, prime minister, or saint. Rather, it is the Memoirs of a Social Monster; or, the History of Charles Price, Otherwise Bolingbroke, otherwise Johnson, otherwise Parks, otherwise Wigmore, otherwise...[8 more names]...&c. &c. &c. and commonly called Old Patch. Containing an Accurate Account of the astonishing Fraud and Ingenious Forgeries of that Truly Great Man. Greatness is in the eye of the beholder. He had been defrauding the Bank of England for the past six year but had been committing "devices and depredations on society" for 55 years. He was 63 years old when this was published in 1786 so he must have started when he was eight. The London native began his crime spree by robbing his father. He moved on to defrauding investors in a brewery, passed himself off as a Methodist minister, and then moved on to forging bank notes. He was evidently very good at it, making his own papers and ink, engraving the plates and printing the forgeries. Eventually, the law caught up with him. Knowing he would not be able to avoid execution, he hung himself. Item 182. Priced at £850 (British pounds, or approximately $1,072 in U.S. dollars).

A few decades later, forgery being rampant, the Society of Arts, Manufacturing and Commerce came up with a solution for the Bank of England. They published their answer in 1819, Report of the Committee of the Society of Arts...Relative to the Mode of Preventing the Forgery of Bank Notes. Their idea was to make bank notes require a diversity of skills to produce, making it harder for any one or two people to produce accurate likenesses. Engravers would be required to create borders of exquisite design and workmanship, fine vignettes would be used, etc. The Bank of England learned nothing from Charles Price or his later followers. They ignored the recommendations and continued to make bank notes as they had for over another 100 years. Item 10. £695 (US $876).

England has suffered many difficult times in its history, but what could be worse than it was facing in 1868 - an oyster famine? Item 39 is Oyster Legislation Past and Present: with an Examination of the Principles and Recommendations set forth in the Report of the late Sea Fisheries Commission. Author Henry Cholmondeley-Pennell warns, "With the increasing difficulty of finding an adequate food-supply for the people...the scarcity of oysters - almost amounting to a famine - now existing in England gives it special importance at the present time." The author explains that this is a subject to which "I have largely devoted my attention," and therefore he has been able to reach a judgment as to what sort of legislation was needed to be enacted. Presumably, he saved England from an oyster famine as there seems to be enough of them to go around these days. £95 (US $119).

Next is The Original Bath Guide, Containing an Essay on the Bath Waters... No, no, you Americans have this all wrong. This is not a guide on the proper way to bathe. Here is the rest of the title, - ...with a Description of the City, and a Variety of Useful Information. It is a guide to the city of Bath, including an itinerary of roads and two large folding maps. It was published in 1838. Item 12. £145 (US $182).

Enough about the Old Country (for Americans anyway). Here is an American adventure. Item 114 is a Narrative of an Expedition to the Source of the St. Peter's River, Lake Winnepeek, Lake of the Woods &c, performed in the Year 1823, by order of the Hon. J. C. Calhoun, under the Command of Stephen H. Long, published in 1825. Stephen Long was America's third great internal explorer, following Lewis & Clark and Zebulon Pike. In 1820, he led a mission along the Platte River to the Rocky Mountains. However, this is an account of his second expedition, a few years later. Long proceeded up the Mississippi River to the St. Peter's River, now known as the Minnesota River. He went to its headwaters, now across western Minnesota to eastern South Dakota. They would then proceed farther north, to Lake of The Woods and into Canada to visit Lake Winnipeg and the Red River settlement. Field describes this account as "almost a cyclopedia of material, relating to the Indians of the explored territory. Nothing escaped the gentleman who accompanied the expedition; and their statements regarding their customs, character, and numbers of Sioux and Chippeway tribes, are among the most valuable we have of those people." The author, the one who accompanied the expedition, was William Keating. He was Long's geologist. This copy has a notation that it once belonged to William Beckford, the very eccentric major English book collector of the early 19th century. £795 (US $1,002).