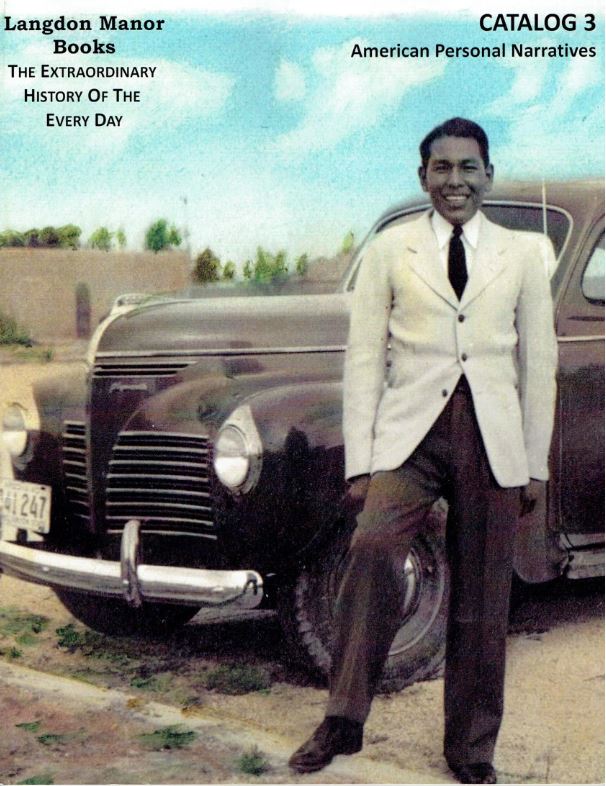 Extraordinary history of the every day.

Langdon Manor Books has issued their Catalog 3 American Personal Narratives. They describe their collection as "The Extraordinary History of the Every Day," and that is precisely what makes these photo albums, diaries and the like so fascinating. These are not life stories of great people but of "ordinary" people, people like the rest of us, extraordinary in their own way. You will be able to relate to these people in ways you can't to George Washington and Winston Churchill. They are not unlike us. Here are a few selections from a catalogue of material I find some of the most interesting that comes across my desk.

Before we get to the extraordinary, I have to start with this one because it is as ordinary as it can be. Item 2 is the daily diary from L. Wood Johnson from 1941-1953. I kid you not on this one – Johnson was a farmer from Farmersville, Texas. He has filled all but 36 pages of a 500-page book with thousands of notes about his farm, where he grew corn, cotton, peas, oats, clover, grapes, apples, potatoes, onions, and more. Johnson also raised sheep, milk cows, turkeys and hogs. He had 128 acres, all but 15 of which he farmed. The diary describes his work, what he planted, trips to market, building improvements, livestock births and deaths, and the weather. Lest you think everything about Johnson was ordinary, he did develop his own strain of corn, Wood Johnson Yellow Dent corn, and was named a master farmer by the McKinney Weekly Democrat-Gazette. And as for Farmersville being a dull place, it was then known as "the onion capital of North Texas." Johnson was an older man at the time of this writing, dying three years after the last entry at the age of 87. Priced at $500.

Next up we have a World War I diary, mostly from France in 1918. The soldier who kept it was Eldrid Thomas Hunter of Grand Forks, North Dakota. Hunter was likely another "ordinary" man, but what he lived through, and somehow survived, was anything but. He describes the constant artillery fire and grenades as the enemies faced off, each from their trenches. Death was all around, and danger was unending. On August 14 he wrote, "...our post was shelled by artillery which destroyed it, and we narrowly escaped with our lives, only by seeking shelter in a dugout, it was an exciting night, we all expected a fight, hand to hand, but the Boche (derogatory term for a German soldier) failed to show up..." On September 26 he writes, "You have to go thru such a living hell to appreciate what an awful thing war is. To see your companions shot down on every side and to witness such butchery and then try to tell it as you saw it and felt is as I say impossible." Item 22. $850.

The young in America were also asked to join the cause during World War I, though their experiences were not nearly so terrifying as Hunter's. Instead, they were asked to join the United States School Garden Army. Schoolchildren aged 9-16 were encouraged to participate in gardening, providing food for their communities at a time when there were food scarcities due to the war. It was portrayed as patriotic, reportedly reaching membership of 6 million. However, it did not last long. Begun in 1917, the army was disbanded by 1919 after the end of the war. Item 1 is a scrapbook and photo album from the School Garden Army at the Mary Hemenway School in Boston. The children are shown sowing and reaping, along with tilling and other farming activities. Other pictures show them at exhibitions. Along with the photographs the scrap book includes various USSGA publications, a flyer by President Wilson, and typescript planting songs. $2,000.

War was not hell in Vietnam if all you have to go by is this photo album of U.S. soldiers in 1970. The photographs show soldiers clowning around. The lack of captions makes it hard to identify the pranksters, but among the pictures we see a couple of soldiers with an American flag with a peace symbol replacing the stars while they hold their hands up in peace symbols. There are also shots of local bands on stage with soldiers joining in and dancing women. Langdon Manor warns us that some of the dancers are nude and some shots were taken from a bit too close to the stage. More seriously, one of the pictures shows choppers landing along with internal views of the barracks. Item 21. $750.

Item 27 is a photo album of the U. S. Indian Service's traveling library and motion picture bus from 1937-1941. Thirty-two are black and white while 175 have been hand-colored. Pierre Alford, a Shawnee, operated the bus with his wife Dorothy. It appears it was Dorothy who took the pictures and did the coloring. They served various Native American communities around the American Southwest, primarily Arizona. Many of the photographs were taken at schools, either in front, in classrooms, or of children inside the bus. Some are from a fourth of July celebration, a girls' camp, or by people's homes. Other images display natural scenery such as mountains and cacti. Detailed captions are provided for most. There are also several shots of family friend Virgil Brown, including a party after his wedding. He served with the Bushmasters in World War II and he later appeared in newspaper photographs with a few of his fellows and General Douglas MacArthur. That is Brown you see on the cover standing next to his (presumably) new Plymouth. $8,000.

This next set of photographs captured one of the sadder moments in recent history. It consists of five photo album leaves containing ten original photographs and three commercial ones. They are of the spaceship Challenger disaster in 1986. They were taken by Dale and Frances Weick. They had received an Air Force pass to view the lift off from just 3 ½ miles away. They took pictures longer into the flight as they hoped to photograph the rocket stages separating. A note on one of the leaves reads, "Frances kept saying 'It was so beautiful & then it was gone.'" Item 31. $450.

Langdon Manor Books may be reached at 713-443-4697 or LangdonManorBooks@gmail.com. Their website is found at langdonmanorbooks.com.