Women, African Americana, and Other Items Odd and Wondrous from Langdon Manor Books 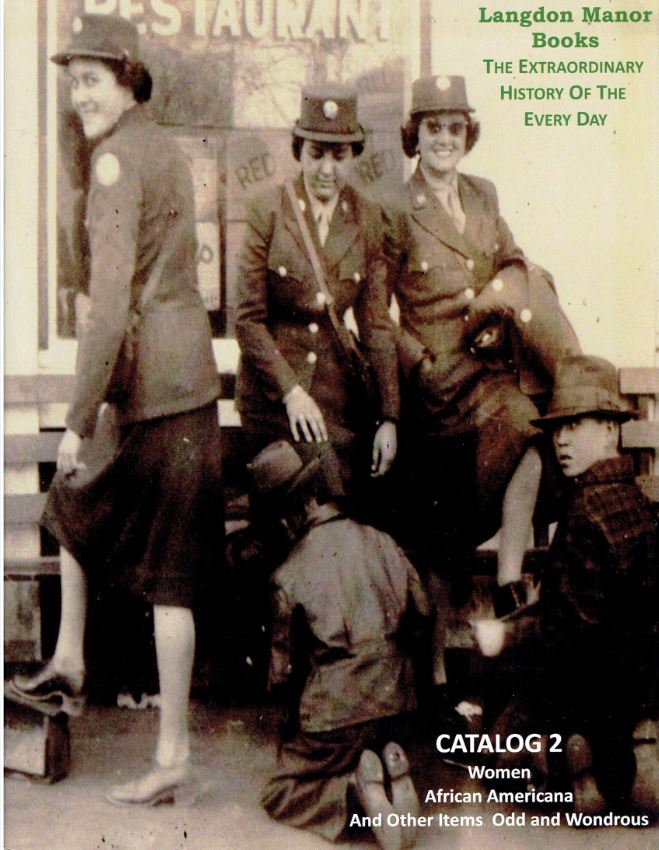 Langdon Manor Books has issued their Catalog 2, Women, African Americana, and Other Items Odd and Wondrous. Langdon Manor describes their specialty as "the extraordinary history of the every day." That is a perfect description of the fascinating material you will find. It consists of photo albums, manuscripts, posters, books, rarely by famous people, but by regular folks. Still, the history is "extraordinary" as we find them in historic settings. Photo albums cover regular people but during wartime, sent overseas to put their lives on the line for their country. There are photo albums of black families in the early 20th century, remarkable people who managed successful lives under the enormous pressure of Jim Crow laws and other forms of discrimination. Ordinary Japanese American families created photo albums of their lives during wartime – in American detention camps. Posters and pamphlets express the sentiments of the oppressed, while others reflect the views of their oppressors. Gays express their pride in a time when society tried to fill them with shame. Women fight for equal rights. Ordinary people lived extraordinary lives, and this catalogue captures a few of them. Here are a few samples.

We begin with a story that personifies extraordinary, ordinary people, and "items odd and wondrous." Henry Wiegman had his 15 minutes of fame in the 1920's when his story spread through the press. Wiegman was born without arms, and with undeveloped feet. He didn't sit around feeling sorry for himself. He wanted to be an artist and learned to manipulate a brush and other tools, at first by pinning them between his shoulder and cheek, and then with his teeth. His skills were such that even as a boy he was able to make a good deal of money with traveling circuses. He even caught the attention of President Coolidge, who wrote him, in perhaps not the most tactful manner, "it is better to be a good boy without arms than to have arms which are always getting one into mischief." Still, the circus life was not his dream. He wanted arms, and at the age of 12, he went to a surgeon. The doctor discovered bone stubs under his skin, whose position he adjusted so that small artificial arms could be attached. While these were not sufficient for painting, he was able to use them to type and feed himself. Item 1 is a 182-page photo album with over 1,000 photographs compiled by Lucy Duco. She was a dwarf. The two fell in love and married, and what this album reveals is an upbeat, happy couple, engaged in all sorts of fun activities. They became officers of the Opportunity Guild for Shut-ins which helped handicapped people in the Chicago area live normal lives, along with providing lots of recreational activities. This album covers the years 1947-1948 and it shows a loving couple living a happy and exciting life despite the enormous challenges life presented them. Priced at $3,000.

Next is a report detailing the difficulties of people who lived difficult lives – African American tobacco workers during the Depression. Item 9 is a typescript of A First Full Draft of the Report on The Tobacco Worker. A Study of Tobacco Factory Workers and their families for the Industrial Studies Section, Division of Review NRA. This NRA was not the National Rifle Association but the National Recovery Association. The report was created in 1935 by Charles S. Johnson. Johnson was an African American sociologist and civil rights worker, later first black President of Fisk University, who was able to obtain funding from white philanthropists to study the effects of Jim Crow laws on black communities. Johnson wrote of black workers that they lived in "small, bare, gloomy structures," and that whites were paid 30% more for the same labor. He also found that the black workers were not fond of the NRA, quoting one as saying, "The NRA ain't done us no big favor because we works ourselves to death." Perhaps comments like this led the Roosevelt administration to refuse to publish the report. The result is that the only other copy located is one in the National Archives. $2,350.

The institutionalized racism that pervaded America, particularly the South, would finally be challenged significantly with the school desegregation case of 1954, leading to the most turbulent era of the civil rights movement – the 1960's. Not many whites in the South dared to take a principled stand, and the number of public officeholders who did was negligible. Richmond Flowers, Sr., was a notable exception. Flowers was an old law school friend of the man who came to symbolize segregation in that era more than anyone else, George Wallace. The friends ran for office in their home state of Alabama in 1962, Wallace for Governor, Flowers for Attorney General. Both ran on a segregationist platform. However, they parted ways when federal courts ordered the schools desegregated, and the President sent troops to back up that order. When Wallace famously stood in the doorway of the University of Alabama to deny entrance to two black students who first integrated the university, Flowers called for obedience to federal law. He went on to prosecute several cases against the Klan and others, and attempted to gain a conviction in one of the most notable of the murder cases of the era, that of Viola Liuzzo. It was a hopeless case in Alabama state courts at that time, though the defendants were later convicted of civil rights violations in federal court. In 1966, Flowers ran for governor as Alabama law at the time prevented Wallace from succeeding himself. Wallace ran his wife instead and she, not surprisingly, soundly defeated Flowers, his political career over. Flowers would later be convicted of taking bribes while in office and eventually was pardoned by President Carter. He maintained his innocence and claimed the prosecution was punishment for his desegregation efforts. Item 12 is a typed letter signed by Flowers, dated June 17, 1963. It is a response to a letter from a Georgia newspaper editor thanking Flowers for his courageous stand in the University of Alabama case. Flowers writes in appreciation, "When a man speaks from his heart with determination to take a stand that he believes to be beneficial to his people, it is indeed warming to know there are those who support his attitude." $175.

From taking a stand for decency, we transition to hate and bigotry at its worst. J. B. Stoner was a Georgia lawyer, Klansman, leader of the National States Rights Party and other such organizations, and perennial political candidate who drew 5% or 10% of the vote in statewide races, but never came close to winning. In his legal capacity he defended James Earl Ray during his prosecution for the assassination of Martin Luther King. Stoner was a suspect in many killings himself but was never charged until 1977, when he was charged and convicted of the Bethel Baptist Church bombing twenty years earlier. Item 25 is a handbill circa 1986-87 under Stoner's name as "Leader Crusade Against Corruption" out of Marietta, Georgia. It is headed, Praise God For Aids. He handed it out in January 1987 during a civil rights march in Forsythe County. In it, Stoner claims God is intervening through the the use of aids "to rescue and protect the White race." The racial connection to aids, rather than just typical gay-bashing, is unusual, but Stoner manages a way to connect it to his long-time racism and anti-Semitism. He explains, "Aids is a racial disease of jews and negroids that also exterminates sodomites." He continues with his medical expertise, saying, "Whites are mostly immune from Aids so long as they stay away from those three Aids high risk groups." Therefore, logically, the way to protect whites from aids is keep these groups "Segregated far away from us White people..." $350.

This next piece provides a more positive look at African Americans in the 1950s. Item 44 is three contact sheets of photographs, each with nine images. All but one of the 27 images feature African American women models standing next to Buicks. We can date the photographs by the Buicks – they appear to be 1954 models. The photographs were taken by Cecil Layne, who served as President of the Negro Press Photographers' Association. His work is held at the Smithsonian, Library of Congress, and New York Public Library. Langdon Manor was unable to ascertain whether the photographs were ever used in an advertising campaign, but if they were, it would have been limited to African American media in those days. $175.

Langdon Manor Books may be reached at 713-443-4697 or LangdonManorBooks@gmail.com. Their website is found at langdonmanorbooks.com