Behind Closed Doors on January 6 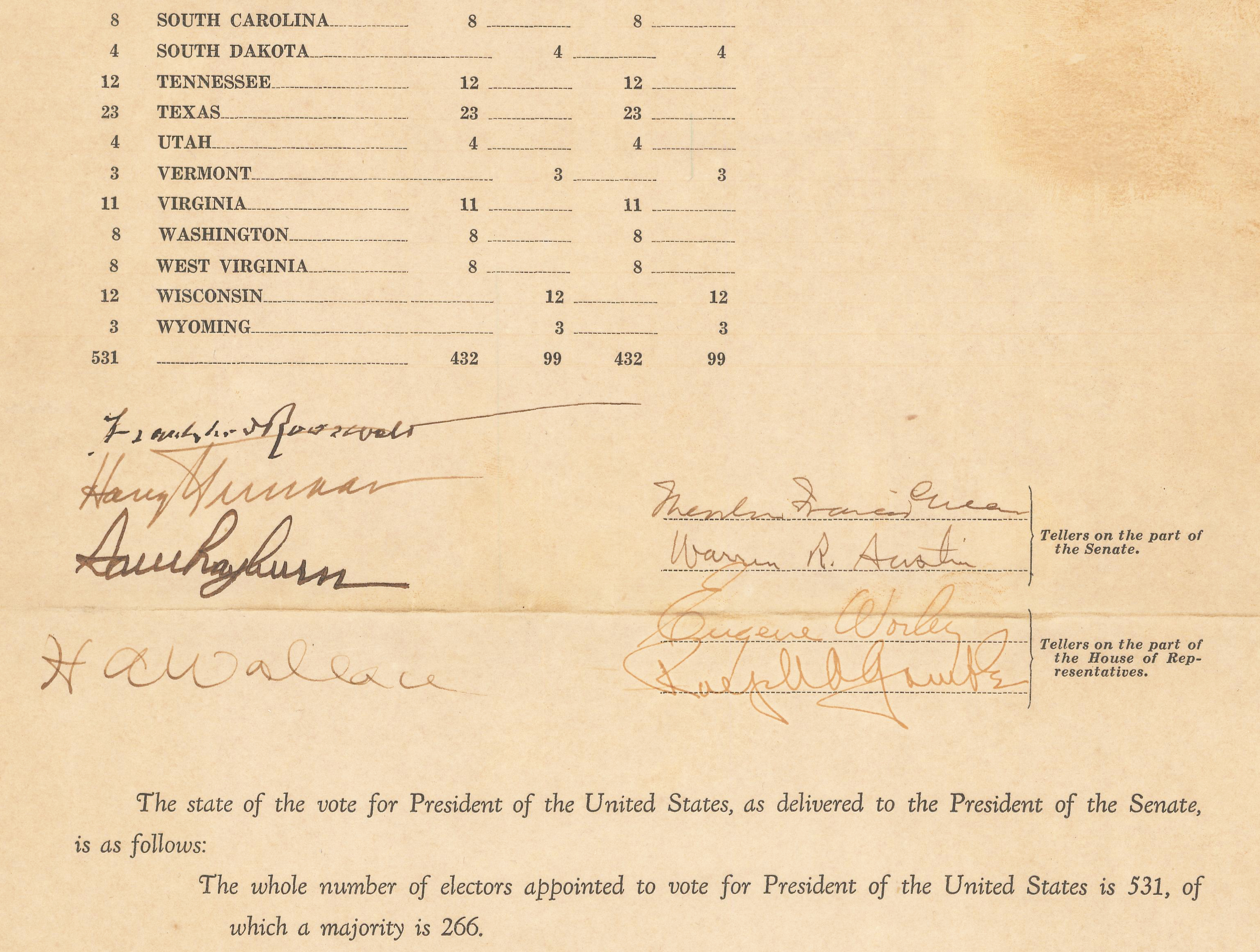 Rare Tally of Vote Certificate from 1945

Until recently, most people didn’t give much thought to January 6 or how electoral votes were tallied for Presidential elections. After most Presidential elections, the January 6 Joint Session of Congress is procedural – almost ceremonial. Of course, there can be objections raised by members of Congress regarding the eligibility of state electors or irregularities with the state certified electoral votes. But after most elections (save for the 2020 election) there is little dispute as to whom the next President and Vice President will be, and the Joint Session can take as little as half an hour.

So what typically happens behind closed doors during the Joint Session?

The members of the House of Representatives and the Senate meet at 1p.m. on January 6 following the Presidential election, as outlined by federal law. The key players in the Joint Session are the President of the Senate, aka the Vice President, and the House and Senate Tellers, who are appointed by the presiding officers of their respective chambers. The President of the Senate presides over the session and presents the Certificates of Vote submitted from each state and the District of Columbia.

The Certificates of Vote are read in alphabetical order by state and then recorded and counted by the four Tellers (two from each chamber). After the counting of votes from each state, objections can be made, which must be submitted in writing and signed by one Senator and one Representative. Any qualified objections suspend the Joint Session in order for the Senate and House to meet separately to debate and vote on the objection. A simple majority is required by both chambers to confirm the objection; otherwise, the objection fails and the votes for that state are counted. After the votes from each state and the District of Columbia have been read and counted, President of the Senate announces who has been elected President and Vice President of the United States.

The procedure for each Joint Session is documented within the minutes of Congressional records, and certificates of the final vote tally are printed and signed by the four Tellers. These certificates are kept within the official records of the House of Representatives, the Senate, the White House and the National Archives. The Tally of Vote Certificate is an important document that serves as a historical record of our democracy. It usually accompanies a peaceful transition of power and a celebratory event in American history.

One significant example of the Tally of Vote Certificate was discovered by the heirs of one the Tellers from January 6, 1945 and is up for auction this month.

The certificate was for the 1944 election, which was particularly unique as it occurred during World War II and resulted in Franklin D. Roosevelt winning an unprecedented fourth term (which would subsequently become unattainable with the ratification of the 22nd Amendment several years later, thereby limiting the presidency to two terms). FDR won the election against New York Governor Thomas E. Dewey in a landslide, winning 432 electoral votes out of a total of 531.

Interestingly, Roosevelt’s running mate was not his current Vice President, Henry Wallace. Although Roosevelt’s health was already causing concern among Democrats, his nomination as President was largely uncontested. However, as a result of his declining health, U.S. Senator Harry S. Truman from Missouri was deemed a better Vice Presidential candidate in the event that Roosevelt would be unable to fulfill his duties as President.

The President of the Senate, Vice President Henry Wallace, presided over the January 6, 1945 Joint Session for counting electoral votes, which began at 12:56 p.m. Wallace presented the Certificates of Vote from each state, which were then counted by four Tellers: Theodore Francis Green and Warren R. Austin on the part of the Senate and Eugene Worley and Ralph A. Gamble on the part of the House. After all the Certificates of Vote were read and counted, and without any objections, Wallace announced Roosevelt as President and Truman as Vice President. An official printed certificate of the Tally of Vote by state was then signed by the four Tellers.

This Tally of Vote Certificate is particularly unusual, as it was also signed by Franklin D. Roosevelt, Harry Truman, Henry Wallace, Sam Rayburn and Lewis Deschler. Rayburn was Speaker of the U.S. House of Representatives at the time and still holds the record for the longest tenure as Speaker. A congressional office building for the House was named after him in 1965. Deschler was the first Parliamentarian of the U.S. House of Representatives and also holds the record for his tenure in that role.

Tally of Vote Certificates are only meant to be signed by the four Tellers, whose names are printed on the document with lines indicating where they are to sign. This example appears to have been created specifically for Eugene Worley, one of the Tellers of the House, whose name has been scrawled in the bottom left corner of the document, likely as an indicator that this copy was meant for him personally. At the time Worley was a member of the U.S. Representatives from Texas, which he served from 1941 until 1950, at which point he was nominated by Truman to an Associate Judge seat on the United States Court of Customs and Patent Appeals. He was later appointed by President Eisenhower to Chief Judge of the United States Court of Customs and Patent Appeals, which he held from 1959-72.

After Worley’s death in 1974, the Certificate was passed down to his heirs.

This certificate is such a fascinating piece of history, documenting the most important cornerstone in our democracy – a fair and free election. And the fact that it is up for auction is rare.

Over the past couple of months, we have worked with the National Archives and Records Administration to learn more about Tally of Vote Certificates and the January 6 procedures. Outside of government institutions, documents of this sort are rare; we have only found two other examples that have come up for auction in the last 25 years. That this example is signed by the President and Vice President appears to make it even more unique.

Although 2020 brought the date “January 6” to the forefront of news headlines, it has always been an important date on the calendar of American history. The Tally of Vote Certificate from January 6, 1945 is a fascinating example of the history of our democratic process.