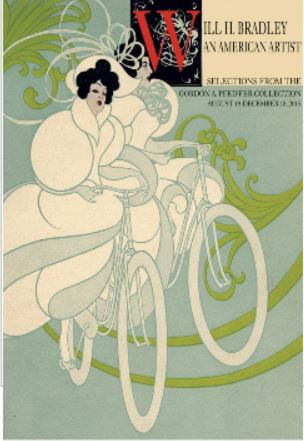 The artwork of Will Bradley.

Will Bradley and other online exhibits at U of Delaware

Black Bibliography is the topic for discussion at a Virtual Salon hosted by The Bibliographical Society of America on Sept. 22, 2022 from 7-8:30 pm, Eastern Time.

The discussion focuses on material covered in the June 2022 issue of the Papers of the Bibliographical Society of America (PBSA) devoted to the traditions and futures of Black Bibliography. Guest editors Jacqueline Goldsby and Meredith McGill are on hand, together with authors and contributors including:

Join them in a conversation led by Professors Goldsby and McGill to discuss and exchange ideas, and to share new developments and directions raised by the provocative essays and book reviews included in this volume.

Registration is free and open to all; closed captioning in English and ASL interpretation will be provided.

The Bibliographical Society of America erin.mcguirl@bibsocamer.org

Click here to join or renew your BSA membership

Digital Humanities and Book History is the inaugural conference of the Digital Cultural Studies Cooperative (DCSC). This hybrid and distributed event takes place September 22-24, 2022, collaboratively presented by the University of Illinois at Urbana-Champaign, Southern Methodist University, the University of California Los Angeles, the Ohio State University, and Texas A&M University.

The Digital Cultural Studies Cooperative seeks to explore, celebrate, question, and disrupt intersections where disciplines, technologies, and communities converge. DCSC aims to advance a wide ranging dialogue that spans boundaries and highlights unlikely connections in the field of digital humanities.

History of the book, grounded in the discipline of bibliography, is a rich field that is particularly suitable to the digital context. Bibliographic data includes temporal, spatial, and named entity information that can be analyzed at scale. Longue durée analyses of textual data can offer insights on topics, audiences, and patterns of language use over time. This event offers an opportunity for these communities to converge.

DCSC charges no membership fees. However, registration is required to participate. Registration is pay-what-you-are-able, with a minimum suggested contribution of $45.

The conference schedule and registration are available online.

Inquiries may be sent to Dr. Cait Coker cait@illinois.edu

Wild Things Are Happening: The Art of Maurice Sendak opens at the Columbus Museum of Art on Oct 21, 2022. It is the first major retrospective of Sendak’s work since his death in 2012. The exhibit is composed of more than 150 sketches, storyboards, and paintings by Sendak drawn from the collection of The Maurice Sendak Foundation. Highlights include original work for Sendak’s most famous books: Where the Wild Things Are, In the Night Kitchen, and Outside Over There.

Sendak was influenced by writers ranging from William Shakespeare to Herman Melville. Alongside landmark pictures for Sendak’s own books are examples of artwork he created for such celebrated publications as The Bat-Poet by Randall Jarrell, A Hole is to Dig by Ruth Krauss, The Little Bear Series by Else Holmelund Minarik, and Zlateh the Goat by Isaac Bashevis Singer.

Designs for many of Sendak’s theater, film, and television productions are also featured. The exhibition highlights Sendak’s love of Mozart and the way the composer’s life and work influenced not only Sendak’s designs for Mozart’s operas, such as The Magic Flute, but also key books including Outside Over There and Dear Mili. As Sendak stated, “I love opera beyond anything, and Mozart beyond anything.”

The show runs through March 5, 2023 before heading on an international tour.

The exhibition is guest-curated by Jonathan Weinberg, artist, and curator of The Maurice Sendak Foundation. Weinberg also edited the profusely illustrated catalog that brings together a diversity of perspectives, including Sendak’s own words about his career and a major essay by distinguished art historian Thomas Crow.

Both the book and the exhibition are notable for their scope, their focus on Sendak’s emulation of other artists, and the role played by art history in his creative process. As Sendak himself said, “if there must be more to life, then it is surely what art provides.” In this spirit the retrospective highlights the relationship of Sendak’s pictures to the art that he collected and loved including works by William Blake, Walt Disney, Winsor McCay, George Stubbs, Beatrix Potter, and Philipp Otto Runge.

“So many of us grew up with Maurice Sendak’s illustrated books,”observed Nannette Maciejunes, CMA executive director and CEO. “This exhibition not only gives you the chance to see original drawings, but to discover Sendak’s range as an artist and the true depth of his creativity.”

Will Bradley and other online exhibits shine at University of Delaware

The University of Delaware Special Collections presents an interesting and diverse selection of online exhibitions on permanent display . The shows feature many different book genres as well as graphic arts, pop-ups, mineralogy, Black and Women’s studies, photography, and many other contemporary and historical topics. A host of earlier shows are also archived and linked at the site.

Two that may be of particular interest to RBH readers are a wide ranging display and discussion of prolific and influential artist, printer and graphic designer Will Bradley (1868-1962), who was one of the most prominent and popular artists of his day.

Also of special interest is Things Aren’t What They Seem, Forgeries and Deceptions from the UD Collection which covers a variety of ingenious fakes from antiquity to the present, accompanied by often wry comments on the motivation of those who sought to decieve. Some were done for profit, some for fun, and others just to invent works by noted authors that never actually existed.

Alex Johnson, 36, Associate Librarian played a curatorial role along with his colleagues in both exhibitions. He commented that generous donations from widely divergent sources made both shows possible.

The Bradley exhibit is drawn from a gift from Gordon A. Pfeiffer, a UD graduate and book enthusiast, who assembled one of the world’s premier collections of the work by this artist. It contains a great variety of books, periodicals, prints, ephemera, and artifacts, spanning the whole of Will H. Bradley’s long and productive career. The size and scope is so vast that the items on display can only represent a fraction of the great wealth of materials found in Pfeiffer’s collection.

What became the the Things Aren’t What They Seem show, started when Frank W. Tober donated his collection of historic and literary forgeries to the UD library. Tober, a former DuPont chemist, was interested in the science behind creating and detecting forgeries, and his collection presented the library with an extensive array of materials. Since then, UD has continued to add to the forgery collection.

Most of these items would once have been seen as worthless frauds, and many of them were originally sold under illicit pretenses. Now, though, they serve as valuable artifacts in their own right. As a group they explore the many ways that people have tried to deceive each other, whether through outright forgeries, practical jokes, or cases of mistaken identity.