Revisiting the Durants in the 21st Century: Story of Civilization Gets a 2nd Life on YouTube 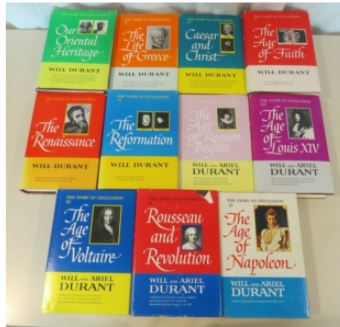 The Story of Civilization, by Will and Ariel Durant, is an 11 volume series. Published between 1935 and 1975 it is the most popular historical publication of all time and has sold millions of copies.

Anyone who grew up in a moderately literate household during the mid-20th century could count on finding Will and Ariel Durant's The Story of Civilization on the family bookshelf. The 11 volume historical series was wildly popular. It was issued and reissued in regular and book club editions and later on tape and other formats. Taken collectively the books totaled over ten thousand pages, sold millions of copies, and were translated into over twenty languages.

The first volume, Our Oriental Heritage, came out in 1935 and new work by the prolific duo appeared until 1975 when The Age of Napoleon was published. The first six were written by historian-philosopher Will Durant; his wife Ariel is credited as co-author for the remaining volumes.

Will Durant, born in 1885, first came to wide popularity with The Story of Philosophy, which was the best selling American book of non-fiction in 1926. The Civilization series won a Pulitzer Prize for General Nonfiction in 1968, awarded for Rousseau and Revolution. The series also received the Presidential Medal of Freedom in 1977.

The Story of Civilization put Simon & Schuster on the map as a publishing house. In the 1990s, an unabridged audiobook production of all 11 volumes was produced by Books on Tape read by Alexander Adams” (a pseudonym for narrator Grover Gardner) according to a Wiki on the Durants.

The goal of these volumes was to write a "biography" of civilization. Durant sought to not only include the usual information about wars, politics and profiles of important figures but also to provide a broader context including culture, art, philosophy and religion. The work spanned some 2,500 years from ancient Greece to the Napoleonic Wars, with long sections on the histories of the Middle East, India, China, and Japan.

As Croften Kelly wrote in his article “Every Man His Own Historian”: William Durant and the Price of Popularizing History (Vanderbilt Historical Review, Winter 2018) “In the first few decades of the twentieth century, enormous increases in literacy vastly expanded the market for books in many academic subjects, including history. At the same time, universities also expanded rapidly, creating far more professional historians whose work became increasingly fragmented and specialized. As a result, the history books written by professional historians appeared less and less interesting to the majority of readers, who wanted to read books with a broader scope.”

Kelly points out that popularizers like Durant were not without their critics who sometimes found him, as Kelly puts it, “careless with his facts and too dramatic with his words.”

Critics also took issue with his assumption that historical truth was timeless and fixed and his emphasis on great men. Indeed though the work spans thousands of years, with few exceptions those depicted in greatest depth were apt to be dead white men of European ancestry, alas, a category that is often considered both narrow and politically incorrect in the present era.

The Durants both died in 1981 and though their work remained popular and in-print, it took the pandemic and YouTube to bring some of their more compelling writing to wider public attention.

A little known contributor with a YouTube channel named Rocky C. has posted 90 selections, mainly biographies, from the Story of Civilization. These are all in audio format and are uniformly excellent. Little is known about Rocky C. other than his oblique self description: “I'm Rocky C. - ascetic, Kerouac-ish bohemian type. I upload Will Durant videos mostly, found on my Portrait of Genius playlist. This Channel is not monetised and never will be. If you like any of the Will Durant stuff please consider checking out his actual books….``

As the pandemic dragged on and many podcasts seemed like thin soup, I turned increasingly to this channel for content that was informative, lucid and often lyrical. The Durants are an exception to the age of Twitter, that tends to value brevity. Their take on Goethe, for example, runs over three hours. Long or short it’s mostly good, especially useful as adult bedtime stories.

Among the many offerings my favorites include:

If Rocky C’s channel has any shortcoming it is that his “genius” playlist is a little tricky to find but eventually turns up at https://www.youtube.com/channel/UCWytMxSLLwejjLlgZYeJ1-w/videos

Surprisingly, as fascinating as these selections are as spoken word, they have inspired not the slightest desire to read the books. I take that back, I might just get around to reading The Age of Voltaire.

If you venture beyond the free excerpts on YouTube there’s a wide selection in multiple formats including hard and soft cover book, tape, CD, MP3 and ebook.. A quick search turned up over 500 listings at prices that range from over $800 to a $1.50 plus shipping for an odd volume.

Link: Every Man His Own Historian: William Durant and the Price of Popularizing History