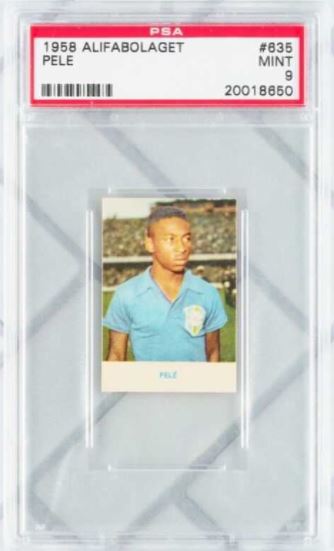 We keep waiting for the bubble in sports card collecting to burst, but not yet. The dizzying rise in prices has been fueled by speculative investors and the recent appearance of fractional sale owners. This time the record was for a soccer card, the first such card to reach the million dollar mark. It is already a third of the way to its next million.

Soccer is the most popular team sport in most of the world, but not in the United States. That is where sports cards have long been popular collectors items, the result being that soccer cards have trailed baseball, basketball, football, and hockey cards. With this recent sale of a Pele rookie card for $1.33 million, soccer now joins the exclusive club of million dollar cards. However, it still is well short of the others. The current records for other cards (as of this writing, it could change tomorrow) are for baseball, Honus Wagner - $6.6 million, for basketball, Lebron James - $5.2 million, for football, Patrick Mahomes - $4.3 million, and hockey, Wayne Gretzky - $3.75 million.

Pele is over 80 years old now and hasn't played professionally for the good part of half a century, but he is still the most famous soccer player ever. Less than a year ago, another Pele card held the record price at $372,000. Then, in June, 2021, a Topps “Superfractor” card for Erling Haaland, not a household name outside of soccer circles, sold for $432,000 at Goldin Auctions. Superfractors are special, one-of-a-kind cards designed to extract a lot of money from collectors. That held up until November when a similar Pele card sold privately for $900,000. Like the new record setter, it was a Swiss Alifabolaget 1958 Pele rookie card graded at PSA 9.0. There are only six such highly graded cards known and none graded higher.

This particular card has its own history of rapidly escalating prices. It was sold at a Goldin auction in late 2020 for $288,000. It then appeared on the fractional sale site RallyRd, offered for a total price of $315,000. Each share sold for $10, which some quick math reveals there were 31,500 shares created. A year later it sold for $1,330,000. I don't know whether cards will continue to be great investments or fractional shares will continue to sell, but these investors made out like a bandit. They more than quadrupled their money in a year. This won't always happen, but you are free to roll the dice on such investments if you dare. Those who collect works on paper will be pleased to know RallyRd now has fractional shares available for a George Washington letter ($20 per share for a total of $150,000), a copy of Macworld #1 signed by Steve Jobs and Steve Wozniak ($11.25 per share for $225,000), and a first edition of Moby Dick ($7 per share for $70,000).

The way these fractional shares work is that RallyRd sells them like a stock IPO (initial public offering). After 90 days, you can buy and sell them from others like you can stock. However, ultimately, when there are potentially 31,500 owners, no one gets to keep it. It remains locked up somewhere. In order for the value to be realized, it must eventually be sold to an individual collector. How do you do that? You take a vote. When someone wants to buy it, and they make an offer through RallyRd, the shareholders vote. If a majority agrees to sell it for the offered price, each shareholder gets his share of the purchase price.

This can't go on forever, and you don't want to be the last one who buys in just before the market falls. Until then, people will continue to buy, looking for the easy money. Some will win; some will lose. It has always been thus.