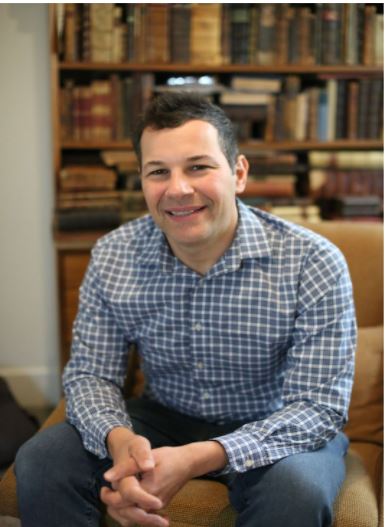 “My personal interest is more in discovering and buying than selling,” said Adam Weinberger, who does business under two names. On the Internet he is widely known as Adam Weinberger - Rare Book Buyer. Using that name he posts interesting and informative educational material about rare books on many platforms. His bricks and mortar persona is Adam Weinberger Rare Books (ABAA) based in New York City where he keeps an inventory of about 3,000 items focused on antiquarian items, ”all of it hundreds of years old.”

At 46 years he has been a part time bookseller since the age of 16 and a full time dealer since 2001. His command of the media is impressive.

Over the years he has made multiple appearances on Pawn Stars, a reality TV series filmed in Las Vegas and considers himself a friend of the show. “I’ve known them since the beginning,” he said. He sees his guest shots as “not so much a way to promote my business as a way to make the field of rare books seem less remote. I think of myself as a person devoted to the popularization of the rare book trade. It’s amazing,” he continued, “how many people in the mainstream are interested, but lack exposure. They think of rare books as high brow, snooty, or ivory tower.”

These generally are under 15 minutes. Each one concentrates on a specific aspect of the world of rare books and they are also more educational than promotional.

For example, his YouTube video on valuation, though not viral, has been very popular. https://www.youtube.com/watch?v=9m-jU1KVq6c&t=794s.

A few years ago he experimented with a trial Instagram book catalog, but, he commented, “that was not particularly successful.” Since then, he added, "Instagram has evolved to make direct purchases much easier.”

Even though the catalog didn’t sell a lot of books, it did make him think that the short visual clips characteristic of Instagram had more potential than most people realized. He mentioned a video snippet he posted on Instagram featuring a book about poison published in 1666 with green arsenic laced endpapers got 2.5 million hits. https://www.instagram.com/reel/CTqWfropKTR/?utm_medium=share_sheet

Though there was no shortage of prospective buyers, Weinberger decided to keep that one.

“Instagram’s hashtag keywords makes it easy for people who share common interests to find each other,” he said. This generates “a great sense of individual communities. I am able to engage with a lot of special collections and librarians. It also provides opportunities to buy and sell. On the educational side I can show interesting items, and focus in on detail.“

In the same vein Weinberger has two sites on Facebook - one as Rare Book Buyer and the other as Adam Weinberger Rare Books. He also shows up on Google and Etsy. However, he recently dropped out of eBay after more than 20 years on that platform. Looking forward he’s considering the possibilities of NFTs (Non-Fungible Tokens), especially as they relate to rare books and exhibits.

By the sheer volume of his online presence you might assume that this is a fairly large operation, but Weinberger insists he is generating this wide array of content as “a one man circus. I’m not a professional, but I do it on a regular basis and find it easy to do.”

“For the videos I talk freely and there’s not a lot of editing … Most people today own a smartphone and that makes social media relatively easy - there is a low barrier to entry.” He finds Instagram “fast and easy.” Facebook has a different demographic and is “a more complicated unwieldy site”, while instagram is simpler. “Engagement is much higher on Instagram.“

All that media exposure means his inbox is flooded with hundreds of emails each day. “I have a canned response for some and some I will redirect, explaining it’s not for me, but I do try to answer everything. Yes, I know, I have to hire somebody, it's just the pandemic threw a wrench in my plans.”

Whether real or virtual, he finds, “there is a growing appreciation of older antiquarian material. When I put up a video lots of young people are really fascinated; even across the centuries it still has an appeal, be it old Latin manuscripts or publications by Elzevir. Exposure to this type of material is exciting, especially in situations like a show where it can be handled. Not everyone lives around the corner from the Morgan Library.”

He stresses the importance of “fresh” in his comments, pointing out, “If you go into a shop and there are hundreds of books on the shelf, invariably the customer wants to see that box under the desk that isn’t out. People want stuff other people haven't seen, fresh to market. For that reason I pay higher prices for private sale items than the same book at auction.”

In his videos Weinberger frequently recommends a variety of online reference sources for those researching rare books or trying to arrive at estimates of value. Some of the most frequently mentioned are:

Weinberger makes his full time living as a rare book dealer. While he declined to state how much his business earns, he confirmed it was in the low six figures. In the past he has traveled widely to buy and sell and participate in trade events and fairs, but like many others “during the pandemic, I’ve gone practically nowhere.”

Currently he lives in San Diego with his wife and two young daughters, and commutes cross country to continue to run his business in Manhattan. The move, he said, was pandemic driven.

“The pandemic has been a difficult time for me. Many of my colleagues did very well. During the first year they had extraordinary sales. For me it was just the opposite: libraries and  special collections were closed, or had more important priorities. My business was down more than 50 percent.” As for his own health, “I was mostly OK, but I did get Omicron. Let me just say it’s not pleasant. It lasted five days and is definitely more than a cold.”

Weinberger’s plans for the rest of 2022 include an appearance at the New York Antiquarian Book Fair, currently scheduled as a live event from April 21-24th at the Park Avenue Armory (between 66th and 67th St). https://www.nyantiquarianbookfair.com/