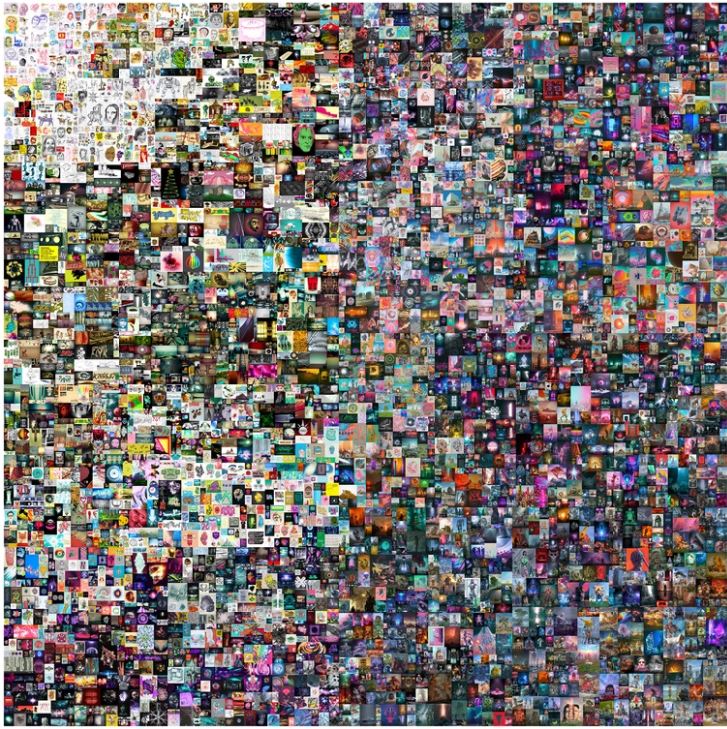 One advantage we always thought physical books had over their digital counterparts is that physical books are collectible. There is no way you could collect a book composed of ephemeral electronic impulses, a copy of which everyone on earth could have on their computer. Where is the substance? Where is the rarity? So much for common wisdom. Our perceptions were stunned a few weeks ago when a digital artwork sold for an astonishing $69.3 million at Christie's. Seriously. There is nothing on canvas, no physical painting. What the buyer got was a digital file, the same (almost) as every other one you can copy off the internet for free.

Welcome to the world of NFTs. NFTs are non-fungible tokens. There, that explains it. I don't understand it either. “Non-fungible” means one of a kind, it cannot be replaced by something else. An original painting is non-fungible, a print fungible. Tokens are those things that make cryptocurrency work. Bitcoin is a cryptocurrency, and one bitcoin can be replaced by another. They are fungible; they are all the same. An NFT adds a marker to the token that makes it unique. Your NFT, unlike your bitcoin, is not exactly like every other.

Still, there is nothing you can touch, hang on the wall, put on a shelf, even flip like a baseball card. It is just an image you view on a computer screen. I guess you can somehow display the token to your friends to show that yours is the “original” copy, but who is going to pay for that? The answer is someone just paid $69.3 million for it, so I guess we need to rethink that.

The artwork is called Everydays: The First 5000 Days. It is a collage of images from the Everydays series. The artist is “Beeple,” the art-name of Mike Winkelmann, age 39. He reminds me of Banksy, except we know who he is. "Beeple" is comparably self-effacing. On his website, Winkelmann (who refrained from using capital letters) writes, “he makes a variety of art crap across a variety of media. some of it is ok, but a lot of it kind of blows ass. he’s working on making it suck less everyday though so bear with him.” It's reminiscent of Banksy and his “I can't believe you morons actually buy this shit.” Like Banksy, his artwork is better than he makes it out to be, but still, $69.3 million for a digital file?

So, will we see books offered to collectors as NFTs? Unless this whole concept blows over really soon, I think it is inevitable. Not just art but videos, music, cards, all sorts of things are being sold now as NFTs. Books, which are now available as e-books, are an ideal use. A famous author could sell their first copy, in effect the manuscript, typed on a computer, as an NFT for big bucks. If you think an NFT of some text is a stretch, Jack Dorsey, founder of Twitter, sold his first “tweet” for $2.9 million. Yes, a first copy of an e-book can be sold as an NFT. Furthermore, NFTs can be created that are virtually identical, so the author could have a first edition of NFTs “printed” in a limited run of 50 copies and sell each of these, not as rare as a one-of-a-kind, but still rare. Presumably, the author could even digitally sign each of the digital copies to make them even more valuable.

Is this the future of collecting, or at least, a viable alternative to traditional collecting? Obviously, whoever paid $69.3 million for Beeple's artwork thinks so. Yes, you can display a picture that looks the same on your computer screen, or read an e-book that looks the same on your e-reader, and not notice the difference whether there is a multi-million dollar token with it or not. But, that is also true with prints, first and second printings or editions of books, or photographs, which all look essentially the same. For example, contemporaneously printed photos off the same negative are far more valuable than look-alike ones printed later, though they look the same. Some unnoticeable feature, like a watermark on the paper, makes all the difference. Perhaps the ability to have a look-alike digital version is not so critical after all.

You might argue that you cannot display your digital collection the way you can your physical one. You can only look at it on a computer monitor. Sort of, but you can now put up an electronic screen on the wall to display your artwork. You can show your picture, or alternatively, a picture of a bookshelf housing your e-books. Even better, you could have the screen on your wall scroll through your “paintings,” or scroll through images of the covers or title pages of your books. You are no longer limited to just displaying spines. Advantage, digital.

Of course, that still leaves the issue of not having something you can physically hold, traditionally such a major part of collecting. That is too big an obstacle for me. I want to be able to touch what I collect. But so what? I am not of the digital age. I may consider myself non-fungible, one of a kind, but to sellers of books and art, I am fungible. I can be replaced by another customer, so why should they care what I think? The reality is that the next customer more and more will be someone born of the digital age, for whom this type of collecting may make more sense than it does to me.

So, is this the future of collecting or just a temporary fad? We look to Winkelmann for an answer. He told Fox News, “I absolutely think it’s a bubble, to be quite honest. I go back to the analogy of the beginning of the internet. There was a bubble. And the bubble burst.” However, there is a second part to that quote, “But it didn’t wipe out the internet. And so the technology itself is strong enough where I think it’s going to outlive that.” Perhaps we won't see too many more $69 million price tags, or more of the other sky-high prices we have recently seen, but that doesn't mean this form of collecting will go away. The Dutch tulip bubble ended and people no longer pay ridiculous prices for tulips, but they still buy them. Perhaps there is a place for digital collecting, even if I won't be a participant. NFTs may survive, but these prices still look like a bubble to me.