Of Montaigne’s Thoughts and Flatulence 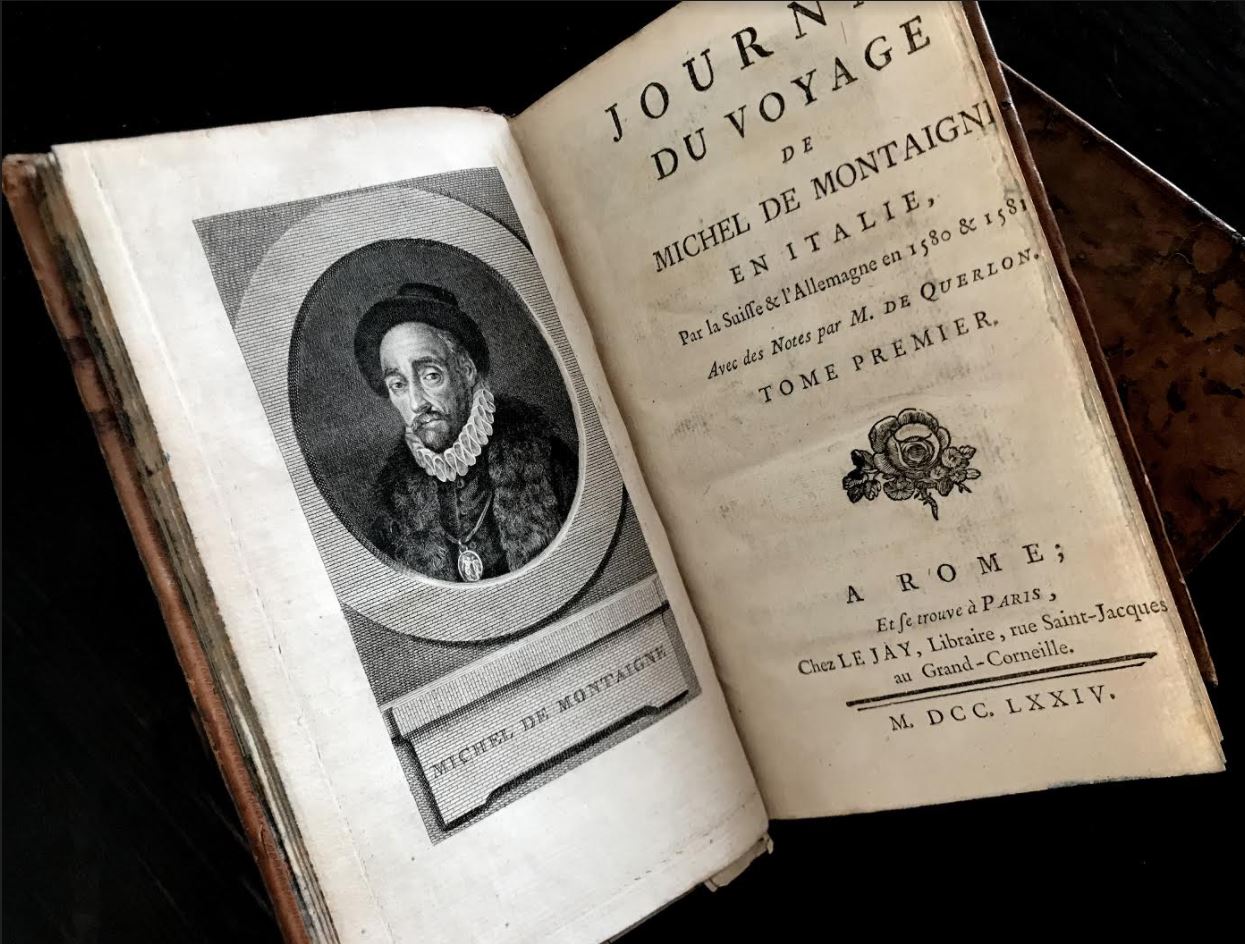 You can learn all about Montaigne's bowel movements in his journey to Italy.

When I decided to visit Italy lately, I chose to visit it in the year 1580, and alongside Michel de Montaigne! The way I see it, if you’re gonna travel through space and time, why not do it with some style? Filled with great expectations, I bought a copy of Journal de Voyage de Montaigne en Italie... (Paris, 1774). One of the three most important French philosophers of all times couldn’t be bad company; well, except when he speaks about his urine and his flatulence—and he speaks about it... a lot.

This is the story of a long lost Montaigne manuscript that wasn’t published until 1774 in Rome and Paris. “In the third book of his Essays, Montaigne mentions his travels,” Meusnier de Querlon writes in the preface. “So we (...) were quite surprised that such a man hadn’t said anything about this experience.” In fact, he had. Almost two hundred years later, Father Prunis went to consult the archives at Montaigne’s castle. “He was showed an old safe full of waste paper; that’s how he found the original manuscript of Montaigne’s Voyages.” This small in-Folio volume of 278 pages was partly written by Montaigne’s secretary (as Montaigne dictated to him), and partly by himself—in his own hand. It was unanimously recognized as Montaigne’s work and published by Le Jay in 1774. Finding a never published before manuscript of one of the most important French thinkers of all time is promising! “The particular and full knowledge he had of Man betrays a man of action,” Querlon states. “You can’t penetrate Man from the dark room of a cabinet.” But when Montaigne left his castle on June 22, 1580 it wasn’t for the sake of philosophy. “His health was a great motivation—he was suffering from kidney stones.” And Lord knows his kidney stones are less fascinating than his essays.

Montaigne didn’t trust doctors, and he considered mineral baths as the best medicine. Consequently, he gives a lot of details about the various waters he drank along the way, and about the effects they had on his health. As Querlon puts it, “it makes his journal boring and quite dry.” Boring... and also embarrassing. “The water Montaigne’s had drunken on Tuesday,” his secretary writes as he dictates, “had made him do three stools, and they had all emptied before noon.” Querlon adds a footnote that resounds with the reader’s own reflexion: “He could have spared us such details, but we didn’t want to touch the original text.” After drinking some mineral water in Italy, Montaigne didn’t obtain the desired results, as “water found its way from the behind rather than from the front, and provoked several liquid and light stools that I dropped effortlessly.” All right, good to know. At one point, they sprinkle Montaigne with hot water—and guess what? That makes him fart. “I also felt immediate relief from my right testicle, which is often swollen—I therefore concluded that this swelling is caused by some gas that dwell therein.” A fart coming out of a testicle? As the French would say, Montaigne qui rit, qui pète, qui prend son pénis pour une trompette (Montaigne who laughs, who farts, who takes his penis for a trumpet)!

Nonetheless this journal helps us to understand that physical pain was part of everyday life at the time. Medicine was inefficient and the poor alike the rich had to endure permanent discomfort—if not deadly pains. They lived under the yoke of physical grief, and they had integrated it to their spiritual life. A good Christian wouldn’t complain—even when the pain became unbearable. Pain was God’s will, and who are you to question God’s ways? Plus, hadn’t Jesus Christ himself died on the cross in terrible pain for you? Do you deserve this honour if you complain against your fate, you ungrateful creature? You don’t always realize how aspirin has changed our lives.

Then, and it might seem contradictory, physical pain forced people to focus on themselves—and we know that the rise of individualism is a characteristic of Humanism; and Montaigne launched Humanism in France. So are “liquid stools” and “red urine” at the root of humanism? More seriously, self-centeredness might have something to do with pain. As a matter of fact, Querlon calls Montaigne ”an egoist” several times in his notes. But we know how the slightest pain can become obsessive. And it’s a good thing to underline that Montaigne was a body as well as an “esprit”.

At the end of the day, there are too many tedious passages in this book, and not enough relevant ones. And most of the time, the latter are just agreeable—like Montaigne talking about his late and famous friend: “This morning, I had a painful thought for M. de la Boétie, and it lasted for so long that it hurt me badly.” And that’s it. There are some entertaining descriptions here and there—but all in all, if you erase Montaigne’s name from the title page, you end up with a pale travel book. Yes—but who can erase Montaigne’s name?

Montaigne’s Voyage en Italie... is a sought-after book, and a good copy is worth around $600. It comes as two in-12 volumes with a frontispiece showing Montaigne’s portrait. If you’re a great fan of his Essays—and who isn’t?—then, this Journal is worth the read. But when I’ll be able to travel to Italy again, I won’t take this book with me, but rather Du Bellay’s Les Regrets. The way I see it, if you’re gonna read a book, why not read a good one?