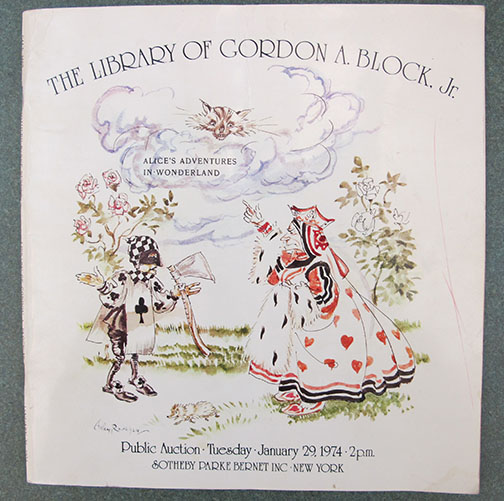 The Library of Gordon A. Block, Jr.

On January 29, 1974 Sotheby Parke- Bernet sold the library of Gordon A. Block Jr. The sale consisted of 257 lots, beginning with books by Louisa May Alcott, and ending with the Brinley copy of a rare Peter Zenger imprint. I was the person who handled Gordon Block’s collection. In addition to setting up the auction, I sold his books on consignment, and bought a number of books outright. It was the first major collection that I had ever handled.

Gordon Block was a distant cousin of mine, and was a constant presence throughout my youth. He and my father were the same age, and apparently had spent a fair amount of time together during childhood. What stands out in my memory about cousin Gordon, as he was known, was that he was a very odd man. He was a graduate of Princeton, who not long after graduating had brain surgery. As a result of the operation one side of his head was noticeably concave. Additionally, because of his surgery, he had great difficulty hearing. This meant that one had to either shout, or get very close, which proved to be a bit scary when I was a child. He was a bachelor, who for reasons that I at times found difficult to comprehend, was devoted to my mother.  Although he owned an insurance agency, I don’t think that he spent much time working there. He was a world traveler, and would always bring my mother a tchotchke from one distant place or another. These artifacts lived in drawers until Gordon’s next visit, at which point they would magically reappear. Without exception, they were godawful.

The thing that stands out in my memory about Gordon, was his collection clocks and watches. He had a serious interest in horology, and was a member of various horological organizations. Every half hour or so cufflinks, tiepins, watches, and who knows what else would begin chiming. This would be a cue for one of us to ask about his latest timepiece. These explanations, particularly for a small boy, were insufferable. Gordon loved his collection, and nothing could stop him from telling us all there was to know about his subject. My parents, to their credit, recognized Gordon’s loneliness and were both extremely accepting and kind. Both his sister and two nephews paid little attention to him, so we became his safe haven.

In August 1973, while vacationing in Europe, Gordon Block died. At the time I was vacationing in Truro, on Cape Cod, when my father phoned and told me Gordon had passed away. He was 59 years old.

Gordon’s father, Gordon A. Block Sr. had been Morris Wolf’s law partner in the firm Wolf, Block, Schorr and Solis-Cohen. Not surprisingly Gordon’s lawyer was at Wolf, Block. My father told me that Gordon apparently had a book collection, and the lawyers who were handling the estate contacted Edwin Wolf II, who in turn put them in touch with me.

Freeman’s auction house of Philadelphia did some sort of estate appraisal and valued Gordon’s book collection at $10,000.The lawyers asked me to look at Gordon’s books. When I went to Gordon’s apartment Della McGearty, his housekeeper showed me his collection. There, in front of me were a number of shelves lined with beautiful bindings and morocco-backed boxes. I was stunned. Unbeknownst to everyone in the family Gordon had a serious interest in books and managed to collect some really wonderful pieces. Most of what he had collected was bought from Mabel Zahn at Sessler’s. These books were acquired very quietly over a number of years.

When I reported my findings to the lawyers at Wolf, Block, they were quite surprised. I told them that in my opinion the books were worth several hundred thousand dollars, but in order to realize their full value it would require patience, meaning that it could take a year or two to dispose of everything. They were pleased with my assessment of value, but explained that there were complicating factors because of the way Gordon’s estate had been designed.

Gordon’s will stipulated that his entire estate be held in a lifetime trust for his housekeeper Della. Upon her death it was to be divided among his nephews and their children. Because of this his nephews were upset and wanted things sold as quickly as possible so they could see to it that the monies were invested in securities. After a certain amount of back and forth I was allowed a couple of months to sell books on consignment, or buy books outright. I was able to make sales of a little over $250,000. What I was not able to sell went to Sotheby Parke- Bernet.

I contacted Gabriel Austin, who, at the time was the head of their book department, and told him about Gordon’s books. He came to Philadelphia, viewed the collection, and was very impressed with the books. Sotheby’s book department felt that Gordon’s books warranted being offered as a single owner sale. Soon after Gabriel Austin’s visit we had an agreement, and it was arranged to have everything taken to New York.

In short order we had a catalog, and about three or four months later the collection was auctioned off.  When compared with today’s prices, it’s laughable what things sold for. I was pleased that between what I had managed to sell and what the books sold for at auction we got the estate over $400,000. This got the attention of a few important people, and it established a level of credibility that I didn’t have prior to Gordon’s sale. This was a big step forward. It was however somewhat bitter- sweet, because I felt that had I been given the time I needed, I could have gotten the estate considerably more money.

The collection contained a wonderful group of fine bindings, including one that had been bound by Roger Payne that had his original bill, plus a note from William Loring Andrews about the item. In addition to bindings, there were also some very good examples of early printing that included Wynkyn de Worde’s Chronicles of England which sold for $2750, the 1470 Augsburg printing of  Josephus’ De antiquitate Judaica, selling for $4750, and the Jenson 1478 printing of Plutarch in two volumes that brought $6750.

Some of the Americana in the sale included a thick paper set of The Federalist Papers that sold for $275; James Logan Jr.’s copy of the Franklin printing of Cicero’s Cato Major that sold for $1400, and another Franklin printing; William Currie’s Sermon, Preached at Radnor sold for $250; Lincoln’s copy of Goldsmith’s Poems sold for $2,000; an 11-page letter from Benjamin Rush to his wife Julia dated June 27,1787, describing a Jewish wedding, sold for $1200; and a one page letter from George Washington to Mathew Carey, dated July 21,1789 talking about Carey’s magazine, The American Museum, brought $4500. There was an Alexander Hamilton letter dated January 21,1789, concerning the Federalist, which sold for $1400, and a John Jay letter written to Benjamin Rush about David Rittenhouse that sold for only $375.

There were some nice groupings of literary first editions that included Louisa May Alcott’s own copy of Proverb Stories and others of her books, including ones that were inscribed; a wonderful collection of Kate Greenaway first editions and original watercolors; 25 lots of books and letters by Robert Louis Stevenson; and 13 lots of Arthur Szyk watercolors.

If Gordon’s books went to auction today they would bring ten or twenty times what they sold for then. I regret not having had enough experience at the time to have bought more than I did. However, in the end, the estate did well, the nephews were pleased, and my reputation was definitely enhanced.

To those of us who knew Gordon, what was most surprising about his book collection was that it realized almost ten times what his clocks and watches did. Everyone assumed that his time pieces would have been worth a fortune. Who knew?