M. Pierre Viaud: Another Chapter in the “People-been-through-...it” Series. 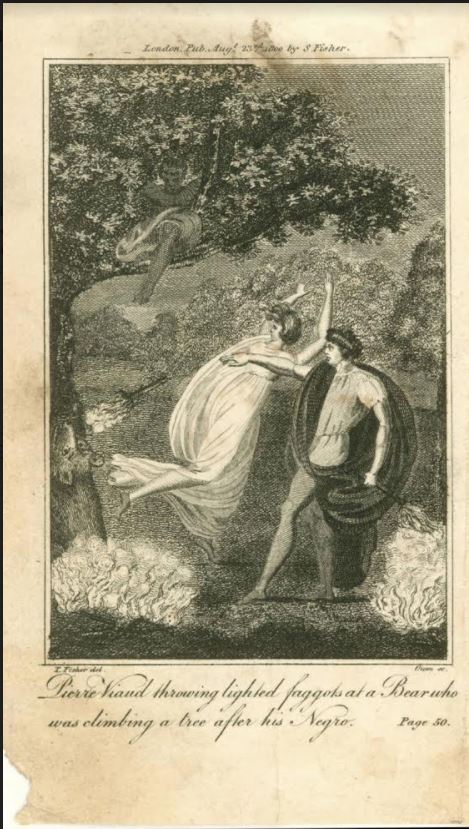 Original in the John Carter Brown Library at Brown University.

In the “People-been-through-..it” series, please welcome Pierre Viaud! In 1766, he survived a shipwreck off the coast of Florida only to go through 81 days of pain and hunger, being forced to kill and eat his Negro slave! Back to France, he published a relation of his ordeal: Naufrage et Aventures de M. Pierre Viaud (Bordeaux, 1770). A terrible tale, indeed—too terrible to be true?

This is not really a travel book, but rather a focus on an 81-day long nightmare. The preface of the second edition (Bordeaux/Paris, 1770) reads: “This book won’t tell you about Viaud’s life, but only about his shipwreck and his misfortune.” Straight to the point, then—when Viaud embarked on Le Tigre in Saint-Domingue, West Indies, with the intention to reach Louisiana. It wasn’t long before the ship hit a reef off the shore of Florida. And hell broke loose. Still aboard the wrecked ship, the crew had no choice but to try to reach the nearby shore—one bold sailor jumped into the raging sea only “to be crashed against a rock.” When they eventually made it to the shore it was like jumping from the frying pan—isolated in the wilderness, the survivors met a “Savage” by the name of Antonio, who pretended to help them out only to scatter them through various islets and to rob them of their last belongings.

The little group soon disbanded and Mr Viaud was left with Miss Lacouture and a Negro slave, whom he had bought in Saint-Domingue. Trying to reach the continent, they embarked on a terrible journey. At night, fierce beasts attacked them: “Several bears came so close that we could make them out in the light of our fire! We also spotted some tigers of considerable size—maybe fear showed them bigger than they were to us.” They were also swarmed by insects, and beaten so badly that “I could hardly open my eyes.” (Viaud). But the worst pain was hunger. They became so desperate for food that “we’d pick up a handful of sand and try to eat it up before spitting it away.” And then one night—“my lost eyes fell upon my Negro.” With Miss Lacouture, they jumped on him in the middle of the night and slashed his throat open. “As soon as the fire was ready, I cut my Negro’s head, tied it on a stick and placed it over the flames—I regularly turned it over so it would be well-cooked.” Then they spent the rest of night tearing out their victim’s flesh to smoke it while surrounded by the fierce roaring of wild beasts. Man against wild? Eat or be eaten.

At the end of the day, Viaud and Miss Lacouture were rescued—they even saved the latter’s son, whom they had to abandon, thinking he would die shortly. Back to civilization, Viaud wrote his story to a friend who allegedly insisted that he publish it. “In complying,” the publisher writes, “he was only hoping that honest and sensitive people would pity him.” His book enjoyed considerable success, and was translated into several languages, including English (Adventures of Monsieur Pierre Viaud...—London, 1771—coming with a nice frontispiece). Yet several readers doubted its veracity. Fake travel books were fashionable and notwithstanding the mention “A true story...” on the title page, Viaud’s story seemed weird. The preface was a bit clumsy: “One would hardly believe that a man could go through such hardship—and in this we can say that truth is not here plausible. But everything reported in this relation has been verified.”

But what did the publisher verify exactly, he claimed that Viaud was hailing from the city of Bordeaux, France, while he was actually born—as corrected in the next edition—in Rochefort? There are some surprising passages as well; the act of cannibalism therein described was a sure way to sell the book—and did Viaud really start by eating his victim’s head? That sounds unlikely, as almost all relations of cannibalism insist on the fact that people who were forced to eat another human being would rather start with unidentifiable parts. At one point, a bear climbs at a tree to catch Viaud’s Negro—but Viaud chases it away with kindled branches, just like in a children’s storybook. What about Miss Lacouture’s son, then? About to be buried, he is suddenly declared alive! A wonderful happy ending. To make it short, there’s something fishy about this relation.

At the time, it was attributed to Dubois-Fontanelle (1727-1812), a journalist and a writer. It was even published in the series Imaginary Voyages, Dreams, Visions and Cabalistic Novels (1787—with a full-page engraving depicting the murder scene)! The compiler warns: “Some may be surprised to find this relation in a series dedicated to imaginary tales (...). We do not contest the veracity of Mr Viaud’s adventures (...) but they are so extraordinary it seems they’ve been invented.” Yet, thanks to various and modern researches, we know that Pierre Viaud did exist—he’s the ancestor of a well-known French writer, Pierre Loti, born Louis-Marie-Julien Viaud (1850-1923). He was a sailor, and he actually embarked from Bordeaux to Saint-Domingue in 1765, as stated in his book. Plus, James Grant, then Governor of Florida, officially attested the shipwreck of Le Tigre. The publisher even added the certificate given to Viaud by Mr Sevettenham, Commandant of Fort Saint-Marc, in the Appalachians. It reads: “I therefore testified that Mr Wright (who rescued Viaud—note of the author) introduced me to Mr Viaud and a woman, whom he had found on a desert island in a state of despair, almost dead from hunger, and who had nothing to eat but a few oysters and the remains of a Negro they had killed in order to save their own lives.” Sevettenham also partly confirms the story of Miss Lacouture’s son.

So, real or fake? Viaud’s relation is believed nowadays to be a true story rewritten by a novelist who gave in to sensationalism. Notwithstanding, the “People-been-through-...it” series is a bottomless pit, and the shipwreck of La Méduse that took place a few decades later, and which gave birth to one of the most terrible relations ever, is here to remind us that even the most fertile imagination will never beat reality. No matter what you may imagine in your worst nightmares, “People-been-through-...it” already.