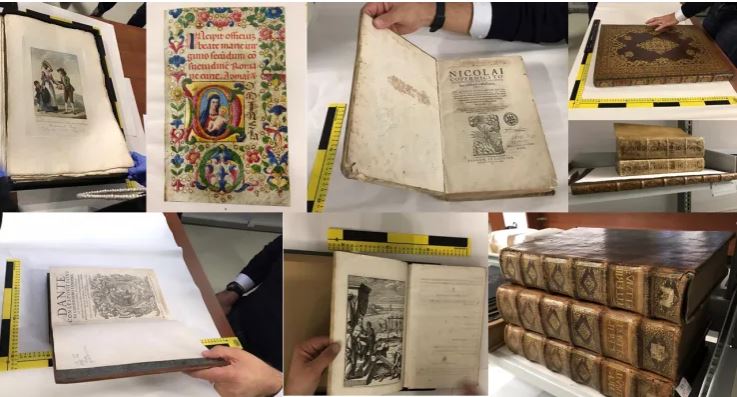 All but four of the books stolen in the $3 million “Mission Impossible” book theft have been returned to their rightful owners. Returned were 240 of the valuable books taken by thieves from a London warehouse in January 2017. Among them were early editions by Galileo, Newton, and Francisco Goya. The theft has been called the “Mission Impossible” theft because of the means used to steal the books. The thieves rappelled into the warehouse from a skylight on the roof to evade the security cameras which were all aimed at the doorways.

It took about two years for investigators to begin identifying suspects. What they found was that the thieves were primarily Romanian nationals, with a sophisticated operation for stealing goods in England. In this case, the three who stole the books quickly flew back to Romania, while others temporarily hid them in the English countryside, until a van from Romania traveled through the Eurotunnel, picked them up, and spirited the books back to Romania. There, they were hidden below the floor of a house. They were finally located by authorities in September, and since then, 12 participants have been sentenced to terms of from three years and three months to five years and eight months.

The recovered books were taken to the National Library of Romania for identification. Detectives from London's Metropolitan Police traveled to Bucharest to conduct the identification. While only four of the books are still missing, and most were returned unharmed, some did suffer damage. Eighty-three books suffered damage ranging from slight to severe. Twenty-eight were said to suffer severe damage while two are believed to be beyond repair. Most of the damage was from water or mold caused by the underground storage, while a few had broken spines believed to have been caused during transport.

According to the Metropolitan Police, there was a joyous reunion between the owners and their books. The owners were Italian and German booksellers who were shipping the books to the annual California Antiquarian Book Fair in February when they were taken in transit. Detective Inspector Andy Durham, leader of the investigation, was quoted as saying “It was lovely to see the joy of each victim being reunited with these irreplaceable books. In particular, the moment when one of the victims, Alessandro Bado, set eyes on the books at the library, and once he had seen the condition of a few of the most important books that he was emotionally attached to, he was so happy and said with great gusto, 'Tonight we drink like Lions.' This made my day, seeing his reaction and joy.”

The Metropolitan Police also reported the reactions of two other owners:

Alessandro Riquier, from Italy, said, “After three-and-a-half years, finally this terrible story has a very happy ending. I went to Bucharest full of hope but also a little bit scared about the damaged books. I was very excited and it was a great joy to handle my books again and to see that apart from one missing, and four books with variable damage, all the books were in good condition. Everybody was happy, the UK Metropolitan Police officers, the members of the Romanian Police and the Carabinieri, were all fantastic in achieving this great result. My special thanks go to them all.”

Natalina Bado, from Italy, said, “The experience of returning the books was very positive and exciting. Reviewing and touching our books three years and nine months after the theft was a profound joy. Every time we were about to view a book we had many expectations regarding the conditions and when we found our works in good condition it was a great happiness for us, just as it was a deep pain to see some damaged books, a feeling partly shared also from all of you and the library staff.”

The Metropolitan Police also reported the remaining four missing books as being the following: