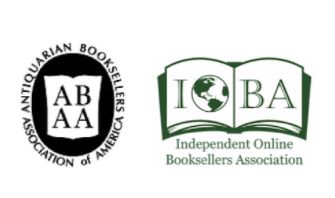 Both ABAA and IOBA hosted virtual book fairs in November.

From Nov. 12th to 14th the Antiquarian Booksellers Association of America (ABAA) offered an online replacement for the traditional Boston Book Fair. According to Susan Benne, ABAA’s executive director, total sales were $1.1 million with 14,115 unique visitors. Benne said there were 185 exhibitors from 15 countries.

“We made a number of improvements between this and our June 2020 fair,” she said, “and will continue to add and adjust features. We are pleased with the results, and are looking ahead to the next virtual fair.”

ABAA member Sheryl Jaeger of Eclectibles in Tolland, CT chaired the organization’s book fair committee. She explained that ABAA dealers paid entry fees ranging from $300 to $500 depending on the number of items exhibited and other options. Vendors could list up to 50 items, though many did not. The Boston event had a Thursday paid preview with a charge of $50 for customers who wanted to take an early look. The event was online Friday and Saturday running on Eastern time. Jaeger reported that “80% of the participants had at least one sale.”

Asked about the technical side, she said that the ABAA used biblio.com as a platform.

Not everyone was happy with the choice. Among the comments from the dealers and customers were “difficult to use,” and “not graphically appealing.”

Jaeger will chair the ABAA March fair, which will serve as a replacement for the in-person show normally held in California. Dates and times are expected to be announced shortly.

In an email following the event IOBA president Douglas Nelson of Nelson Rare Books in Haddonfield, NJ reported: “Clearly there were technical issues that resulted in a slow browsing experience. Conversely,” he thought, “it was much more aesthetically appealing than any of the other fairs and were able to offer all sorts of priced materials as there was no fee (to members to participate).”

Nelson said the IOBA fair featured 79 dealers from eight countries. Top prices included $15,000, from a UK-based dealer, $10,000 from a US-based dealer. Altogether he estimated total sales at “around $60,000,” adding “personally, I sold 3 of 15 items from the fair, but I also sold 7 other items on my website, which hardly ever gets sales so I think there must be some correlation.”

As for future plans, Nelson wrote, “That’s going to be up to the next (IOBA) board. That being said, at this point, I’m not sure that the Wix environment (a web platform) is able to handle the content that we are trying to deliver, so it may be resorting to Biblio, Getman, or something else in the future.”

Given multiple technical and other difficulties the IOBA fair was clearly a work in progress, however it did have some notable positive points. Participation in the IOBA event was a free membership benefit, so participating dealers did not have to pay to be included and gained valuable exposure. The IOBA layout allowed sellers to give a prominent top of the page position to a single item. Vendors could move the items around during the run of the show and replace sold material with new titles. Vendors could also add a significant amount of new inventory on the final day.

Asked for his reaction following the two non-profit fairs, Marvin Getman, an independent businessman who was an early entry into virtual fairs, reported that his own enterprise continues to gather speed. He said that his upcoming Dec. 4th holiday event has about 240 exhibitors and also mentioned that he has licensed his platform to a French antiquarian organization Syndicat national de la Librairie Ancienne et Moderne (SLAM) which will be bilingual French/English running Dec. 11-13. He is experimenting with a 12 hour quickie on Wednesday, January 6, 2021 from 9 am to 9 pm. Later in January the Rocky Mountain Book and Paper Fair licensed the platform for its show. Back in the spring when virtual fairs were just getting started, Getman said he had reached out to various organizations (including ABAA and IOBA) with an offer to help. His offer, he said, “is still open.”

While Rare Book Hub has no magical insights into what sold and why, we did contact two dealers who participated in the ABAA Boston fair who had well above average sell through rates. Here, (somewhat edited) are comments from Garrett Scott and Glenn Mason.

Glenn Mason, 76, of Cultural Images in Portland, OR is a dealer with a strong background in historical museum work. After retirement he and his wife would spend more than 20 weekends a year doing live shows. His stock, he said, consists of manuscripts, such as letters and diaries, ephemera and a few books.

Mason is something of an anomaly in the modern book world. He described himself as “not technically oriented” and runs his business “without a website.” Yet he has achieved enviable sell-through rates ranging from 50% to 75% in the recent virtual book fairs including both Getman and the ABAA events.

Mason stressed the importance of the visual, the unique and the good photograph, as well as the telling description. He liked the ease of upload on the Getman site and found the unlimited number of pictures helpful.

His basic advice to those who would have increased sales: Make it visual, try to come in a little under market price, and present material that is unique or as close to unique as possible. Use the description to tell a story and especially to pull out specific details that are interesting. Using letters and diaries as an example he urged citing parts of the text that convey “the feel and tone of the material.” While stressing the importance of photos and significant textual details he also mentioned the value of having “a good mix.” To him that meant manuscripts, books, photos and ephemera, especially ephemera, which he thinks is becoming more appreciated by collectors and institutions.

Mason said he sold many of his items to dealers and also quite a few to institutions, adding, institutions like it when the material they acquire is well described and organized as it saves them time and money in processing. Unlike so many who offer goods at prestige shows Mason said he tries to keep his prices “a little under market.” The objective he said, “is to sell it.”

Another ABAA dealer who did well at the recent show was Garrett Scott of Ann Arbor, MI. Scott said he offered 22 items for sale at the Boston Fair and sold 17. “My goals for the virtual book fair were necessarily modest,” he wrote in an email, because he had another major project in the works at the same time. “The total asking prices in my booth for the 22 items I listed in the Boston VBF was $8,287. It looks like I will end up grossing about $6,000. (That) is probably a snack for any number of my ABAA and ILAB colleagues. But it’s a decent couple day’s work around here for a guy like me.

“In any case, I try to select representative interesting fresh inventory for a virtual book fair that will photograph well, material that might suggest to a notional new customer the sort of things they will find in my inventory over the long haul with me. I also try to include a few subject outliers to ensnare the unwary. As noted, I look for things that will photograph well. I try to include only material that is not listed for sale in other copies elsewhere online.

“Thus, the booth had a representative batch of odd 19th century American books and pamphlets, into which had been dropped a few things beyond the usual diet of early Midwestern imprints …. This batch also included a German 17th century critical work on steganography (with a working volvelle!), a 1960s sales sample book of baseball uniform flannels, an 18th century French metafiction published in Mystificatapolis, Art Deco contraception quackery, etc.

“None of the customers who ordered were unknown to me. I assume I could have sold this material in one of the online occasional catalogs that I send out every few weeks to my mailing list. My hope for any book fair is exposure to new customers and a chance to develop relationships and to add names to the mailing list. This hope was not realized with the Boston Virtual Book Fair, but I am not insensible to the pleasures of a little cash flow while flying the Association flag among my colleagues.

“One other step I took was to make sure to send out to my mailing list, on the Friday morning of the “general admission”... a bright graphic invitation with a direct link to my own booth. The stats suggest this brought a few customers directly to my books.

On the downside Scott observed: “The round of virtual book fairs promises an exhibiting dealer all the deadlines of a traditional book fair with very little of the social payoff—no drives across country, no stopping to scout, no dinners out with colleagues during the fair, no trade gossip in the corner of the hotel bar over drinks.

“I will likely continue to exhibit at these online events on occasion, out of a sense of duty and because I like cashflow, and because I hope to find new customers and to buy interesting fresh material from my colleagues. But,” he continued, “some deep sentimental chunk of my gut feels like we made a mistake calling these things virtual book fairs, since it sets up an expectation that these events might provide analogous social or emotional excitement.

“Instead, these virtual events feel more like my early days in the trade, dealing with issue after issue of the old AB Bookman’s Weekly landing on my desk—another series of lists of stuff for sale, a few features about the world of books and collecting, a couple of days to try to skim through everything. Except that now, given the need for an exhibiting dealer to photograph the material, to set up the listings on whatever platform we are using, to worry about the formatting of the listings, etc., it’s like they also managed to drag us all down to the magazine printing plant.

“All of that said, I appreciate the work that has gone into producing these events in the quick turnaround after the COVID reset in March. I appreciate having the promotional resources of the ABAA or of an energetic promoter like Marvin behind these events, because it gives me a chance to reach audiences who might not otherwise look at my inventory.”