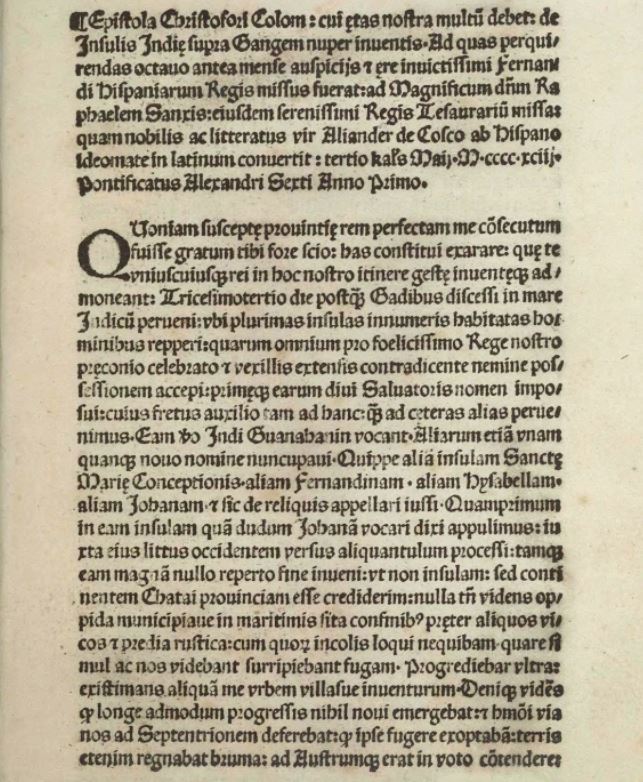 In what seems to have become a distressingly common occurrence, yet another stolen Columbus Letter has made the journey over and back from Europe to America in recent years. This is the fourth time since 2016 a Columbus Letter stolen from an Italian or Spanish library has been discovered in America and returned to its rightful owner. That now equals the number of journeys of discovery Christopher Columbus himself made to the Americas. This particular copy was stolen from the Biblioteca Nazionale Marciana in Venice. Unlike the previous three, no forgery was placed on the shelf to disguise the theft. It was just taken.

As generations of American children know, Columbus sailed the ocean blue in 1492. He returned the following a year with a letter for the King and Queen of Spain recounting his discoveries. Printings were made of that letter to tell others in Europe of the news, but the print runs were short. Of the various editions printed in the ensuing years, only about 80 copies are known to still exist. The Marciana was a special one, being a first edition, known as a Plannck I. It is the first edition printed by Stephan Plannck and is distinguishable from a Plannck II in that it is addressed to just King Ferdinand, while the second edition is addressed to both the King and Queen Isabella. The Plannck I has been estimated to be worth $1.3 million.

According to the U. S. Attorney's Office, District of Delaware, the Marciana Library acquired this Columbus Letter in or around 1875. It was stolen sometime between 1985-1988. If they know who took it, or where it was between then and 2003, they have not let on. In May of 2003, it was sold by an American dealer to a “good faith” collector. The names of these individuals were not released either. It is not surprising the buyer was in the dark as the Biblioteca Nazionale Marciana had not even reported the letter missing at this time.

In 2019, authorities in the U.S. were contacted by their counterparts in Italy who suspected this was the Marciana copy. They requested the collector submit the letter to inspection by Dr. Paul Needham of Princeton University, an expert on the subject. The collector agreed to the inspection. Using information supplied by Italian authorities, including sewing marks, Dr. Needham determined that this was the Marciana copy. The collector voluntary released any claims to title of the letter.