“A Bigger Job Than We Realized:” Revisiting the Published Page in Cleburne, Texas 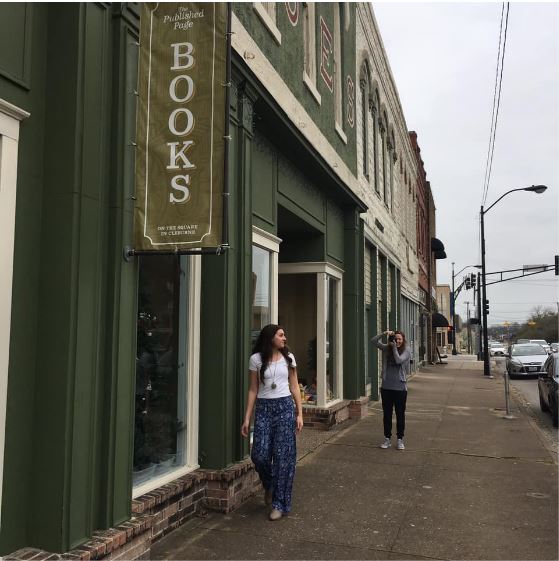 In 2017, when last we wrote about The Published Page Bookshop, owners Jim Hart, and his wife Connye had just purchased a large antique building in Cleburne, Texas on the outskirts of Ft. Worth. After many years of selling books online they were determined to make a go of it as a traditional bricks and mortar bookstore.

At age 74 the Harts weren’t exactly youngsters, nor were they beginners as booksellers. They began online in 1997; then moved into an antique mall, next to a regional shopping center in Arlington,Texas. In 2005, when that wasn’t viable anymore, they dropped the store and sold exclusively on the internet for the next 12 years. The last five years they had a 3,000 sq. ft. warehouse. “When the lease was up in 2017, the landlord wanted a lot more money, so we thought it over and it was buy a building or forget it.”

So they took a big gamble and acquired Cleburne’s second oldest commercial space in a two story building with a total of 10,000 sq. ft. of interior space (5,000 on each floor) and features like 15 foot ceilings and art deco fixtures. While taking a brand new mortgage in your 70s is not for the faint of heart, they had high hopes that their bookstore would prosper and help to revitalize the town square of an aging small Texas town.

“Our family and friends helped with the move,” said Jim, “we had 30 to 40 people helping with taking stock out of storage, and starting to renovate, getting the shelves up….. It turned out to be a big job….It took four months to get to the point where city would let us open it.”

But the couple was filled with optimism: “I made a decision to take everything off line until we got oriented, that meant four months without income, and lots of repairs - some of them were hidden or unexpected. We finally got open Nov. 20, 2017, but we still didn’t have most books on the shelves.”

He thanked Jim Arner (a Wyoming retired bookseller) who came to Texas to help them take things out of boxes, catalog, and assist with the many other tasks necessary to get the ball rolling. They went from 2,000 books to 23,000 on shelves by the beginning of April 2018. Since then,” he said, “it’s just about double, we’re up to about 40,000 books.”

“That four months with no income was hard,” he recalled, “but even when online business gradually ramped up, it took a long time to recover. In the meantime, Amazon became even even more dominant.” Though the Harts have books listed on Amazon, Alibris, Abe, Biblio, Chrisland and their own site, their internet grosses still were thin.

“I don’t like dealing with Amazon,” Jim said, echoing the sentiments of so many in the trade, “I like the B&M alternative; as things go forward I’d like 90% (of our business to be) walk in or people who contact me directly”.

As for their new role as an economic engine for Cleburne (population 30,000) it’s been an eye-opener.

“The old town square was almost abandoned. There were lots of empty buildings, a little shoe repair place, one store, Brides and Beyond, and no foot traffic. But,” he noted, the presence of the bookstore helped and “over the last six month things are opening up. There’s a coffee shop completely renovating, a couple of nice restaurants, boutiques, it’s really starting to turn. It’s not there yet, but it’s happening. All four streets around our courthouse are major highways, foot traffic is building. The town tells us they love us.”

So far The Published Page has initiated an ongoing writers group, “I’d say we’ve got about forty people, extremely creative, one of the most successful things we’ve started. There’s one book club that meets regularly. We’ve had 15 or 20 author signings - all fun, but not all well attended. For one event the weatherman predicted hail, but the show went on anyway. It turned out well, we sold some books and they even asked to do it again.”

On the positive side “Sales go up every month, and that’s with only 3,500 sq. ft. occupied by the bookstore; there’s still plenty of room for expansion. The upstairs will be a treasure, but it will take a massive amount of work to get it going.” He envisions an office complex with lots of antique touches.

“Along the way we’ve made hundreds of new friends. We are 30 miles South of Fort Worth and 50 miles Southwest of Dallas. Lots of people make special trips to come see us. Fifty to seventy-five percent of our customers are driving from out of area to come here. Our customers say, ‘I didn’t know a store like that still existed.’”

“But as much fun as we’ve had it’s a bigger job than we realized. We just don’t have as deep pockets as we had planned.” The store has run into financial difficulties and fallen behind on mortgage and property tax. “We set up a $10K Go Fund Me Account about a month ago,” he said. “It quickly generated about $2,500 and stopped. We’re right at the place that we need to do something to catch up, and get restarted.”

For those who would like to see this ambitious venture climb out of the hole the link to the Go Fund Me Campaign is:

They also accept donation via Paypal at

As an incentive the shop is offering gift certificates that equal or exceed whatever amount is donated. “Give $50 get $65 in trade. I’m a total optimist to make this work out. Our income is going up as we’re paying our debts down.”

“We are never going to be the largest store in Texas but our goal is to have something unique. We should (eventually) have 70,000 to 80,000 books on shelves. Our stock is mostly out of print and used, you’ll find authors you don’t often see, local and regional history, really concentrated on Texas authors.”

He also hints he’s got a stash of petroleum geology books still in storage and he “probably should have gotten that out earlier. I’ve got people who are champing at the bit to go through them.”

According to Hart the largest group of customers “are over 60, but we get Millenials and young Gen Xers age 25-40 who like books, and want books for their kids, including old books. What’s really surprising is how many young people are planning to open stores. I’m hopeful it’s a trend.”

“Running a bookstore is not a way to get rich, but it is an enjoyable way to spend life. When we had an online business, none of our kids were very excited. Once we bought the building they became much more involved.”

As for the future: “I think Cleburne is just on edge of expansion. The new highway has cut down the drive time (from the metro areas). I expect population to double and triple in the next few years. When our bookstore is finished, I expect to see a big increase in value, substantially on the plus side. I wouldn’t mind being wealthy.”