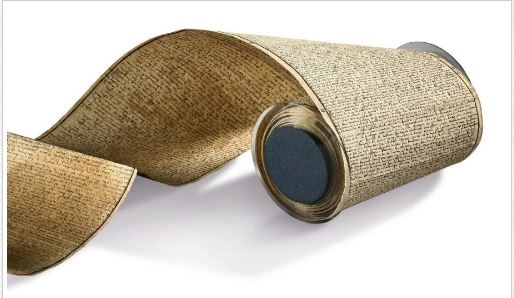 This would almost certainly have been the most expensive item sold at auction in the books and paper field last year had it been sold. It was not. This was not for want of a willing seller or buyer. It was because France is... France. With an estimate of €4-€6 million (euros, or about US $4.75-$7.15 million), that is about three to five times the highest price paid at auction for anything in the field last year. Some believe it might well have gone for more than the high estimate.

What happened? The French government stepped in and said "no sale." It has the right to do so when an item meets its criteria for being a "national treasure." And herein lies the difference between France and the United States. It is inconceivable that this item, even if made in America, would be labeled a "national treasure" by the American government, particularly the current one. It would more likely be called a national disgrace, a work of cheap pornography, something suitable for the obvious use of paper in rolls, as is this manuscript writing.

The manuscript is for the book 120 Days of Sodom, by the Marquis de Sade. If you have spent your life on another planet, and consequently never heard of the Marquis de Sade, just think of the word named for him – sadism. De Sade's novels are filled with sex, though many of his sexual fantasies go beyond what the average person thinks of as sex. Torture, animals, extreme orgies, brutal killings are among the words used to describe the episodes in this novel. I will accept these descriptions by others as I have not read the book myself (not that I would admit to it if I had). And while perhaps not every form of "sex" described is one de Sade participated in personally, undoubtedly many were written from such a vantage. De Sade was noted as an extreme libertine. If any one knew of these things, it was he.

Indeed, de Sade's lifestyle (and at times politics) resulted in his spending many years in prison. Many more were spent in insane asylums. Thirty-two of his 74 years were spent as guests of the French government, under the monarchy, Revolution, and Napoleonic era. Even such diverse governments as these were united in their opinion of where de Sade belonged.

As early as the 1760s, he was in jail at the behest of prostitutes who abhorred his behavior. He was back there is the 1780s, this time at the notorious Bastille, when he wrote this work in 1785. It was written on smuggled pages of paper, glued together to form a roll. He was released in 1789 with the Revolution, and with his far left views, was even elected to the National Assembly. However, he would end up back in prison during the Reign of Terror, freed when it ended, but again in jail and then an insane asylum under Napoleon. He was not appreciated as much by the French governments of his time as he is today.

Again referencing descriptions by others, 120 days is the tale of four aristocrats who determine to experience every sort of sexual perversion imaginable. Apparently, they succeeded in their goal. When de Sade was released from prison in 1789, the manuscript had to be left behind. De Sade was inconsolable, but fortunately (or not), it was later found and preserved. Say what you will about the Marquis, he played a major role in creating the more liberal attitude of the French toward sex, and such makes him an important person in the development of French culture and morés, even if the term "national treasure" sounds a bit odd for M. de Sade.

Returning to the auction, the manuscript was set to be part of the first of what is estimated to be 300 Astrophil sales. It was held December 20, 2017, in Paris by the auction house Aguttes. The Astrophil sale consists of some 130,000 items to be auctioned from the alleged massive Ponzi scheme fraud run by Gerard Lheritier. De Sade's manuscript was to be the highlight of the first sale, until the government stepped in. France has laws designed to prevent the removal of items considered important to the nation's cultural heritage, "national treasures" if you will, from the country. Items considered national treasures, more than 50 years old, and valued at more than €150,000, can be denied an export license. That starts a 30-month period in which the government or private French persons or institutions can raise the funds to buy the "treasure" at market value. If unsuccessful, then the item can be returned to the auction rooms for sale to the highest bidder.

De Sade's 120 Days was not the only item forced withdrawn from the sale. Four items by surrealist André Breton, with total estimates of €4.5 million - €5.5 million ($5.4 million - $6.6 million) were also withdrawn for the same reason. The highest price for an item sold at the Astrophil sale was €1.17 million for a manuscript by Honoré de Balzac, apparently not as much of a national treasure.