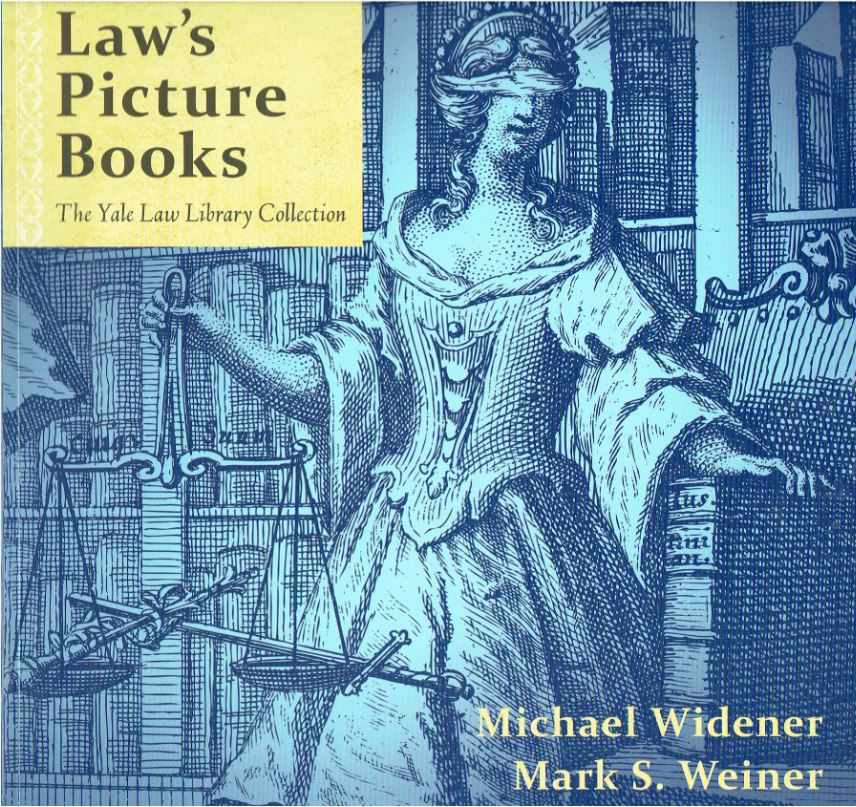 A fascinating companion volume to the exhibition of Law's Picture Books currently taking place in New York City is available for those who cannot (or can) make it to New York. It also bears the name Law's Picture Books, and was authored by the exhibition's curators, Michael Widener, Yale Law Library's Rare Book Librarian, and Mark S. Weiner, Rutgers University professor on leave.

The book features a remarkable collection of illustrations from an unlikely source, law books. That may seem like an oxymoron. In his introduction, Widener notes that American legal scholar Charles Alan Wright once observed, "The only tool of lawyers is words... Whether we are trying a case, writing a brief, drafting a contract, or negotiating with an adversary, words are the only things we have to work with." Widener and Weiner then proceed to make a compelling case why Wright was wrong.

They have placed the many centuries' worth of illustrations in law books they have found into ten categories. Each represents a somewhat different purpose for the use of illustrations. The examples they found, and are richly illustrated in this book, range from manuscripts that pre-date printing to pictures used in the current century. These are the categories described and illustrated within their text.

1. Symbolizing the Law. These are images that depict the ideals of the law. They usually appear at the beginning of law books, as they represent ideals, not specifics. Think of that image of Lady Justice, blindfolded, holding her balancing scales. She symbolizes the ideal, too often missing from the real.

2. Depicting the Law. These are the concrete illustrations, depicting some specific legal principle rather than abstract ideals. An example is a picture of a woman emptying her chamber pot out the window as passers by on the street below dart away in horror. Apparently, this once common practice in the U.S. was outlawed in the Low Countries as far back as the 16th century. Civilization reached Europe a bit sooner than it reached these shores.

3. Diagramming the Law. These are illustrations that use diagrams to make confusing concepts easier to understand. Think of charts and trees. An example of a "tree" is a family tree, showing how relatives, some distant, are related, a very useful tool for determining heirs when there are no children.

4. Calculating the Law. Now we get a bit more mathematical. An example would be a chart of land plats, making it easier to understand the rights of property owners vis a vis each other by clearly delineating where their boundaries are located.

5. Staging the Law. These are best seen as courtroom diagrams, showing where the various parties are situated. It makes it easier to understand how the process works and where a participant needs to be.

6. Inflicting the Law. This is the gruesome part. Think of punishment. Then think of what was acceptable punishment centuries ago. It could be quite cruel and unusual. Here we see beatings, severed heads, hangings, and torture, once regularly used to elicit the "truth" from recalcitrant defendants.

7. Arguing the Law. These are images depicting facts meant to bolster an argument. Forensic images are the best example, perhaps showing the position of a body to prove how the victim was killed, or that it could only have been a murder, not a suicide. Other examples include patent and trademark disputes. An example illustrated is a classic – packaging almost identical to Nabisco's Uneeda Biscuits for rival Iwanta Biscuits.

8. Teaching the Law. Illustrations can help make teaching the law easier for struggling students. The authors note, "many people - shockingly – find it dry." That statement perfectly illustrates sarcasm without need for an image. Pictures certainly make it easier to learn the law and just about everything else. This is why so many "students" learned Shakespeare through Classic Comics.

9. Laughing and Crying at the Law. As the authors note, "Because the law is so serious, it begs to be satirized." Here we usually find cartoon illustrations, and they can range from being simply funny to bitingly satiric.

10. Beautifying the Law. Some illustrations are so magnificently drawn that in time they become viewed more as works of art than tools of the trade.

The book also contains four essays. Michael Widener explains how he came to his interest in building a collection of artwork in law books at Yale University, now over a thousand volumes strong. Mark S. Weiner discusses the process of planning and creating their exhibition of Law's Picture Books. Jolande E. Goldberg, of the Law Library of Congress, writes about the use of techniques, such as pictures, for storing and retrieving information from memory found in early books. Erin C. Blake, of the Folger Shakespeare Library, uses law books to trace the history of book illustration.

To view some images from this book, click here.

Law's Picture Books is published by Talbot Publishing, an imprint of the Lawbook Exchange, Ltd. To order your copy, visit the publisher's website at www.lawbookexchange.com/pages/books/66856

To learn more about the exhibition in New York, and a second one in New Haven, Connecticut, see this companion article in this month's Rare Book Monthly.