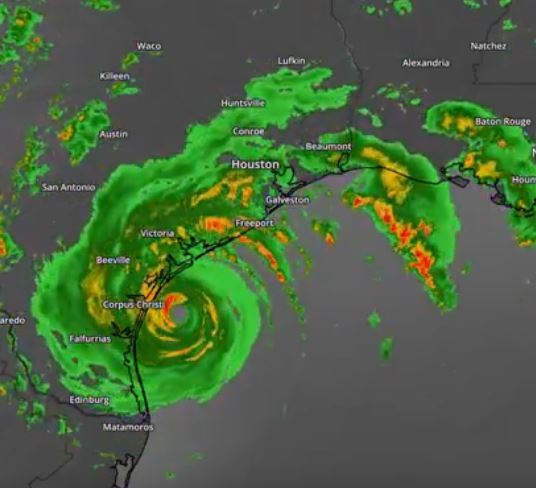 I woke up on the morning of Thursday, August 24, made breakfast, and turned on the Weather Channel for the 8:00 update on Tropical Storm Harvey. I live in Corpus Christi, Texas, a flat, low lying community on the Texas Gulf Coast. For the previous couple of days, the National Weather Service had been predicting Harvey would become a tropical storm, maybe even a minimal Category 1 hurricane with 75 mph winds, when it made landfall near Corpus Christi.

Minimal strength hurricanes worry no one along the coast, but this one looked like it could bring unusually heavy rains. High pressure to the east, high pressure to the west, and a cold front to the north meant it would be trapped from moving away quickly. There could be rain for days. I live close to a river that drains, but very slowly, the flat land. Add to that an expected storm surge that could reach eight feet in the bay to which it drains and flow might not be able to keep up with heavy rains. My house is only 16 feet above sea level. A flooded house is a disaster, even more so in Corpus Christi's extremely humid environment. Mold spores just wait for the opportunity to move into even the best of homes.

The 8:00 a.m. forecast was unchanged – minimal category 1. I debated whether it was necessary to go through the time-consuming, unpleasant chore of boarding up the windows. Probably not. They can handle 75 mph winds no sweat. I waited for the next update, which came at 11:00 a.m. It was different. Suddenly, the forecast was upped to a category 3 hurricane (111-129 mph), maybe even a cat. 4, a 12-foot storm surge, and torrential rains. Houses here are built to survive a borderline category 3. They are not built to withstand an upper category 3. Corpus Christi was the storm's direct target, with arrival time expected late Friday or early Saturday morning. Plans immediately changed.

My wife and I set about putting up the boards, several hours of work, as quickly as we could. After that, we moved valuables at floor level to higher ground, to save them from water in the house. Finally, we packed up several days worth of clothes, a few valuables, and left. As much as I wanted to stay to protect the house, this could be life-threatening. We needed to get out, and hoped to beat the crowds that would turn I-37 west to San Antonio into a parking lot. Traffic was slow, but moving. We got out by 5:00, which is just when people who left for work that morning, confident that this storm was no big deal, were returning home, to discover what lay ahead.

We checked with neighbors. Some were leaving, some undecided, one chose to ride it out. We would keep in touch.

We arrived in Dallas, 400 miles away, at 2:00 a.m. Friday morning. We have family there. They left the door unlocked.

All Friday we remained glued to the TV, watching the progress from afar as the storm grew in intensity and inched closer to land, Corpus Christi still in its sights. It was a day of frayed nerves, alternating hopes and fears. Lives were safe, but the fate of home and possessions was unknown. They could all be gone. It's an uneasy sensation. Finally, late that evening, the storm track shifted slightly to the north. After nightfall, it struck, crossing the shore by Rockport and Aransas Pass, Texas. Those communities are on the north side of Corpus Christi Bay, 15-20 miles from Corpus Christi on the south side.

Come morning, we began searching for information. We did not know whether our house had been damaged, or even still existed. Fortunately for us, Corpus Christi had been mostly spared. We heard from neighbors who stayed or had friends that stayed. Some even took pictures. Our house appeared to be intact. The river did not overflow, the house did not flood.

Harvey had since taken up residence in the area north of Corpus Christi, blocking routes home from Dallas. However, by Sunday, we were able to skirt the worst of it taking a more westerly route home. We still weren't sure what we would find, perhaps damaging leaks from the roof. We had boarded up the doors, but the garage door opener provided access. Electricity had already been restored to our house, though much of the city was still dark. What we found was pure relief. It looked exactly as it did when we left. There was no damage at all. Morning revealed the only casualty to be the fences around the yard, mostly broken and blown over. Add a loose gutter and broken porch screen door and that was it.

You have probably seen the pictures of Rockport and Aransas Pass. Large parts of those communities were flattened, houses nothing but a pile of rubble, others just a foundation, remnants of the house sitting across the street. Some places will be uninhabitable for months, and complete restoration will take years. Even as the storm's winds died down, the torrential rains continued. It stalled around Victoria and dumped rain amounts measured in feet rather than inches. That resulted in the incredible record-breaking floods in Houston. Those are pictures you have undoubtedly seen, people being rescued by boat from upper floor windows and roofs in the nation's fourth largest city. Already the victim of numerous terrible floods, this was the worst of all. It now appears likely that damages will be greater from Hurricane Harvey than from any other storm in American history.

Meanwhile, Corpus Christi became something of a footnote. Dominating the forecasts before the storm landed, it was practically forgotten in the aftermath. The Weather Channel personalities headed north to Houston (the President did pay us a visit a few days later). That was all well by us. Winds and rain are far worse on the north side of a Western Gulf hurricane, where counterclockwise spinning pulls in wind and rain from the ocean, rather than gentler, dryer flows off the land to the south. Meanwhile, the storm surge to the north sucks water from the south. There was no surge in the bay to slow the draining streams' flow. Twenty miles away, sustained winds reached 130 mph. For us it was the 80s. Rain was like an ordinary storm, not a once in a lifetime event.

A little more than a dozen miles made all the difference. It's hard to know what to think. There is relief, but tempered with great sorrow for those not far away who suffered so much. It was supposed to be us, but it wasn't. A last minute jog delivered that terrible fate to others. There is no reason, and it isn't fair. It just happened that way. We will rebuild our fences while others will have to rebuild their lives.