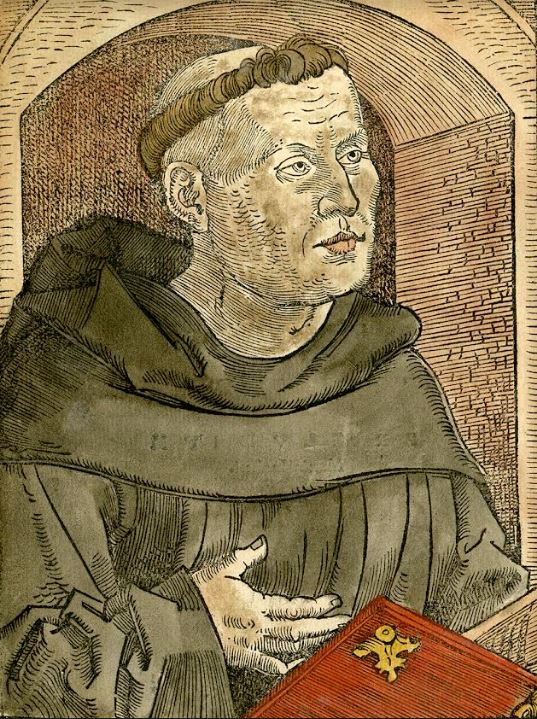 The religious turmoil of the Protestant Reformation proved a bonanza for printers and artists, especially in Germany. A stunning new exhibition at SMU’s Bridwell Library in Dallas evokes the drama and sweep of the period as captured in the theological publications of the era and celebrates the 500th anniversary of Luther’s famous revolt. The exhibit is even more impressive because it is entirely based on the holdings in the library’s own collections and all of the work (other than printing catalogues and oversize sign-boards) was done in house. It is free and open to the public.

The show, titled “Martin Luther and the Age of Print,” is now on view in The Elizabeth Perkins Prothro Galleries of Bridwell Library, Perkins School of Theology, through December 15. In both its real and virtual incarnations the show serves as an introduction to Luther (1483–1546), the reformer and his printed works.  www.smu.edu/Bridwell/SpecialCollectionsandArchives/Exhibitions/Luther

Daniel J. Slive, who heads special collection at Bridwell, wrote the informative introduction and the detailed notes that appear on line. According to his remarks, “In October 1512 Luther received his doctorate in theology and joined the theology faculty at the University of Wittenberg in Germany, a position he would retain throughout his career.”

A few years later Luther nailed his “Ninety-five Theses” to the door of All Saint’s Church in Wittenburg on October 31, 1517 as an act of protest against the then common practice of selling indulgences. These documents, which offered forgiveness for sins to both the living and the dead, could be purchased for a price and provided a large and steady cash flow for the Catholic Church of Luther’s day.

Though Luther intended his action to serve as the basis of an academic debate and theological discussion, instead it became the focus of controversy and instantly gained him rich and powerful enemies. It also kicked off the Reformation with a bang that echoed through the next five hundred years. The repercussions of Luther’s actions kept the newly invented presses of Europe busy as the theological pamphlets and diatribes poured forth, along with every other imaginable form of religious publishing.

According to Slive, Luther’s objections “first outlined in manuscript, two broadside editions printed in Leipzig and Nuremberg and a pamphlet printed in Basel were issued before the end of 1517. These publications were the first of the reformer’s numerous criticisms of the Catholic Church which were widely distributed throughout the 1520s.

“The dissemination of his critique began an extraordinary publishing career that reflected his multiple roles as a theologian, preacher, teacher, and translator. The various genres represented in the Bridwell exhibition include polemics and treatises, sermons and commentaries, Bible translations, and catechisms.

“In addition to his immense impact on Western Christianity in the early modern period, Luther also greatly influenced the world of print in sixteenth-century Europe.

“A remarkably prolific author, he published more than twenty-five hundred editions of his German works, not including the various editions of his German Bible. Often first appearing in Wittenberg, his books were frequently reprinted in Leipzig, Erfurt, Augsburg, Nuremberg, and Strasbourg. These established printing centers provided additional distribution of his works while Latin translations further increased his readership.

“Exploring different printed contexts for Luther’s works, this exhibition includes Bibles and indulgences produced prior to Luther’s own publications as well as pre-17th century Catholic responses to Luther and the early Reformation during his lifetime and after his death.

“This combination of Luther’s publications and those of his adversaries provides insight into the beginnings of the Protestant Reformation and the divisiveness engendered by this quest for religious reform as witnessed in the age of print."

Discussing indulgences Slive writes, “In comparison to book production, single-sheet indulgence forms were easy to print in vast numbers and payment to the printer was insured by the sponsoring institution.

“Sold by Church representatives to individuals seeking remission from sins, (indulgence) forms included spaces for the name, date, and location of the buyer to be completed in manuscript as well as official marks such as a seal or signature. Often published in thousands of copies, the number of extant copies of specific indulgence printings is extremely low. The indulgences on display are true survivors from the first half-century of printing in Europe.

According to the exhibit notes, “Luther considered the translation of the Bible into German his greatest achievement and his only publication that should outlive him. Recognizing that the Bible’s authority was to be found in the original texts–Hebrew for the Old Testament and Greek for the New Testament – Luther became proficient in both languages.

The final publications, however, were not the work of Luther alone but the collaborative achievement of a gathering of scholars in Wittenberg. Their efforts, focused on creating a new German Bible translated from the original languages, rather than from St. Jerome’s Latin Vulgate, proceeded in stages between 1520 and 1534.

“These efforts in broadening the Bible’s intended audience and providing vernacular Bibles to the literate public were remarkably successful. The 1522 New Testament appeared in at least forty-three editions in three years, resulting in over one hundred thousand copies of what was surely an expensive book.

“In addition to aggressively promoting the reading of biblical texts in the vernacular, the Protestant Reformation also introduced one of the most creative and controversial periods of printed Bible illustration."

Martin Luther made effective use of translations enriched with woodcuts, beginning with his first translation of the German New Testament. For that edition he employed Lucas Cranach the Elder (1472–1553), one of the leading artists of the German Renaissance, to supply a rich program of woodcuts, including twenty-one full-page illustrations of the Apocalypse.

Luther’s personal life also comes in for considerable scrutiny in this show. The exhibition commentary observes: “Following his separation from the Catholic Church, and in the midst of continuing theological controversies, Martin Luther married Katharina von Bora (1499–1552) in 1525. A former nun, she came to embody two very different roles in Reformation-era society: she was seen both as Europe’s most notorious “renegade nun” and as the model housewife for Lutheran clergymen.

“Born to a family of minor nobility in Saxony, von Bora was sent to the Benedictine convent of Brehna at the age of five. Intelligent and articulate, she became dissatisfied with monastic life, especially after Protestant reforms became a topic of discussion within her convent. In 1523 she conspired with several other nuns to escape from Brehna to Wittenberg. There she became a follower of Luther, and on June 13, 1525, she and Luther were married. Between 1526 and 1534 the couple had six children.

“The Catholic establishment was scandalized by von Bora’s departure from her monastic vows. … Joachim von der Heiden, a Leipzig University professor, urged her to repent and return to her monastic seclusion:

“‘Woe unto you, poor misguided woman, not only that you have been led from light into darkness, from God’s grace into His disfavor, from holy monastic devotion into a damned and shameful life, but also because you left your convent dressed in lay clothes, like a dancing girl, and went to Wittenberg and cast your eyes on that rascal, Luther, and lived with him in flagrant immorality, and finally took him for your husband; by this breach of faith to your bridegroom Christ you became faithless and perjured. . . . Think of your eternal punishment, and speedily leave this devilish life . . . and repent your past sins, as did the fallen Mary Magdalene.’”

It’s hard to single out the best examples in the show from an abundance of riches. Slive suggested that RBH readers may be interested in items which are particularly rare or unique. These include:

Your writer for RBH monthly recommends

At the core of the Bridwell Library are the Bibles from the collection of Elizabeth Perkins Prothro (1919–2009), who donated nearly five hundred volumes in more than fifty languages to the Bridwell Library in 1996. Notes from an earlier exhibition comment that the gift “reflects Mrs. Prothro’s life-long love of scripture and a connoisseur’s appreciation of historically significant editions.”

A print catalogue is available for “Martin Luther and the Age of Print”. In addition the library hosts a lecture on Oct. 23 titled “A Reformation for All the People: How Printed Works Spread the Reformation” by Dr. Mary Jane Haemig, Professor of Church History, Director of the Reformation Research Program at Luther Seminary in St. Paul, Minnesota.