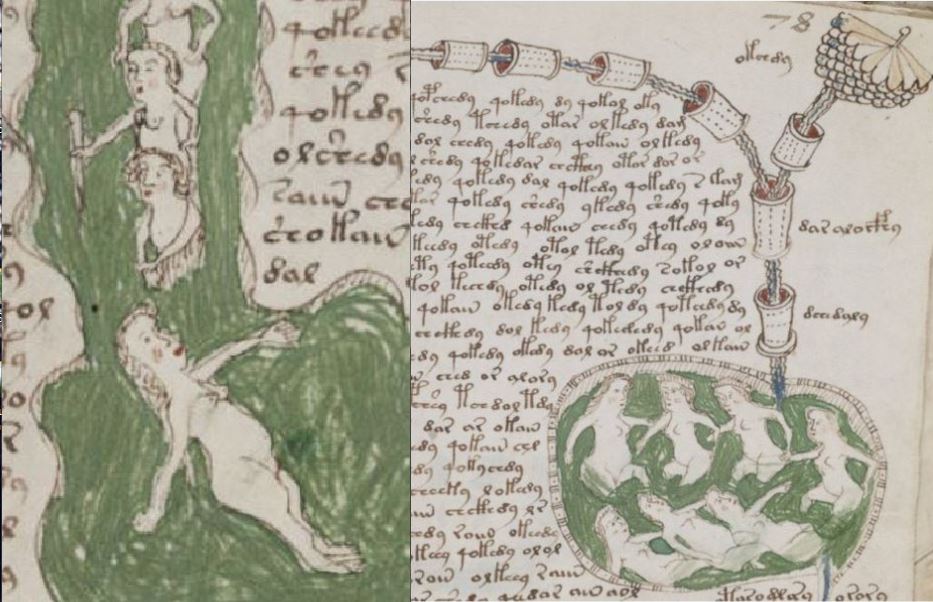 It is perhaps the greatest mystery of the book world. A 240-page illustrated manuscript, whose history can be traced back almost five centuries, remains indecipherable, its language, creator and origin unknown. For centuries, people attempted to crack its code. Then, for about two centuries, it disappeared, returning to visibility in 1912 when purchased by Polish bookseller Wilfred Voynich. It is from Voynich that it received its common name, the "Voynich Manuscript." Since 1969, it has been owned by Yale University's Beinecke Library, a gift from bookseller H.P. Kraus. In these more recent years, attempts to break the code have been even more intense and frequent. And yet, the mystery goes on.

It is written in a language that has confounded even the best code breakers. Whether it is an actual language, a code, or just nonsense writing is uncertain. Its subject is generally understood based on its illustrations. They appear on most pages, and break into categories – herbals, astrology/astronomy, biology (mostly nude women in pools), pharmaceuticals. In 2009, a major breakthrough was achieved in dating it when it was subjected to radiocarbon testing at the University of Arizona. It was determined to date from sometime between 1408-1438. While not eliminating the possibility, that made the chances that it was some sort of elaborate forgery or fraud less likely. Still, the who or why remains a mystery.

In the past month, three more theories were put forth to explain this mysterious book. The first explanation comes from Morten St. George, who describes himself as "an independent researcher who has challenged establishment thinking on several issues." Indeed he has. St. George's theory takes us back to the 1200's, well before the creation of the Voynich Manuscript, to a group that disappeared 600 years or more ago. The Cathars were a dissident Christian sect in the days before Protestantism, a time when for the most part there was but one Christian Church, the Catholic Church. They lived in southern France and northern Italy. The Cathars had a series of castles, most notable the castle fortress of Montségur.

The Cathars had some unusual beliefs, at least by today's standards. They believed in two Gods, the good, as personified by the New Testament, the evil, personified by the Old. Since it was the God of the Old, or Satan, that created the world, material things were evil. Therefore, worldly goods were to be avoided. Procreation was worldly, so that was bad too. Such an attitude is never good for preservation of a group (ask the Shakers if you can find any), but the Cathars must have been good at conversions. They had but one sacrament, a sort of dry baptism of laying a hand on the forehead. Water was avoided as, after all, it was a worldly substance. They were peaceful people, did not believe in violence or war, were vegetarians, treated women almost as equal to males, perhaps their most unusual custom of all for the day.

Their peaceful ways made them well-liked by their neighbors. Neighbors, even the nobility, defended the Cathars, and obviously provided continuing members. However, this still did not sit well with the Catholic Church, which sent numerous leaders out to convert them. They had little success. The Cathars found the Church leaders too worldly. They were content with their own system of beliefs.

In 1198, Pope Innocent III came to power and he was determined to exert more control over the various kingdoms and regions of Europe. In 1209, he launched what is known as the Albigensian Crusade against the Cathars. It was bloody, thousands of Cathars killed. The Inquisition began during the latter stages of this crusade. While locals at first attempted to aid the Cathars, the unfortunate turn of events made it too dangerous to take their side. In 1244, Montségur fell, some 200 Cathars were burned at the stake, and the movement was essentially dead. Their terrible fate has been mostly forgotten as unlike other groups whose sufferings are known, the Cathars had no survivors to tell their story. Some followers converted, others disappeared into the countryside. By the time the Voynich Manuscript was created, the first half of the 15th century, they were no more.

Or were they? St. George's theory was that some escaped by boats, perhaps supplied by friendly neighbors. Since flames awaited them if captured, the Cathars had good reason to flee, even if it was risky. He believes that they made it to the coast of Africa, and then, following currents, sailed to Venezuela. They didn't know where they were going, but that is where the current took them. While the date of such a trip is unknown, the date of the Voynich Manuscript dictates that if they created it, they made it to America long before Columbus.

St. George bases his theory on the illustrations within the Voynich manuscript. While the most common theory has placed its origin in northern Italy, he points to tropical appearing scenes, many plants that do not exist in Europe (most do not appear anywhere, although one he has identified as a water plant from Venezuela). A flower looks much like a sunflower, indigenous to the Americas but unknown in Europe at the time. The images are virtually all women, surprising recognition for European Christians, except for the Cathars. Still, a woman with a cross indicates they are Christians. Various scenes depict the women allegedly trudging through green swamps, common to Venezuela but not Europe. They are naked, appropriate for the tropics, but not Europe (okay, maybe those southern French beaches contradict this point). There is even a castle that looks like Montségur, though that would have been a memory in Venezuela. Another shows a bonfire with a person inside, the castle in the background, perhaps illustrating its terrible end.

St. George also notes an absence of children, despite all of the women, typical for childless Cathars. One image looks like it could be a man pursuing a fleeing woman, perhaps displaying the aversion to procreation. This could also explain their disappearance. While new members were drawn from other Christians in Europe, such may not have been possible among the natives of South America.

Another theory recently put forward comes from Patrick Lockerby, described as a "linguist specialising in language acquisition and computational linguistics," on the Science 2.0 website. Lockerby has used some sort of program on the symbols in the manuscript and determined it is based on a medieval form of Latin. While he does not have a clear translation, he believes it shows this to be a book for apothecaries and those selling bath oils. He points to jars on a shelf as evidence this is for use by apothecaries. Water scenes, he says, display pipes, common in public baths. Rather than Venezuelan swamps, he believes the women are bathing in European baths.

Stephen Skinner, an author with a long bibliography, recently postulated that it was created by a Jewish physician, the naked women in the water being Jewish women in ritual mikvah baths. His explanation is this is the only place in Europe at the time that there would be naked women and no men in a communal pool. This doesn't entirely explain the rest of the book, and the mysterious writing reads left to right, not right to left like Hebrew.

Of course, the cases these researchers have made are tilted toward their beliefs. Supporting evidence is highlighted, but there are many more illustrations in the Voynich Manuscript that may not clearly support their theories. These individuals are not traditional, university type of researchers. They are perhaps advocates for a belief which they have bolstered with reasonable arguments.

I have no idea whether any of them is correct. Most likely, they aren't. The most likely idea to me seems to be some sort of physician. Such a person in those days would have been part physician, part herbalist, part astrologer, part mystic. Perhaps he invented his own language or code to protect his secrets of the trade.

I am struck by the apparent lack of religious symbolism in a document from this era. Even the one image with a woman apparently holding a cross could be some other object composed of two crossed sticks. I find this aspect particularly surprising, even for a physician, though it might support Skinner's thesis that the author was Jewish. European Jews might have found it safer to downplay religion, while Christians would have felt it better to display their faith.

Still, I find these new theories reassuring. They have at least come up with rational explanations for something that has been a total mystery. Claims of some incredibly sophisticated hidden code or hoax all the way to created by space aliens stretch the limits of credibility. Even if these new theories are wrong, they reassure us that there is most likely a reasonable explanation for the creation of this manuscript, though the exact details may yet to be discovered.

Link to an article by Patrick Lockerby in Science 2.0: www.science20.com/patrick_lockerby/the_keys_to_the_voynich_manuscript-225224