The “Old” LIFE: Art, Politics & Humor - What a Difference a Century Makes 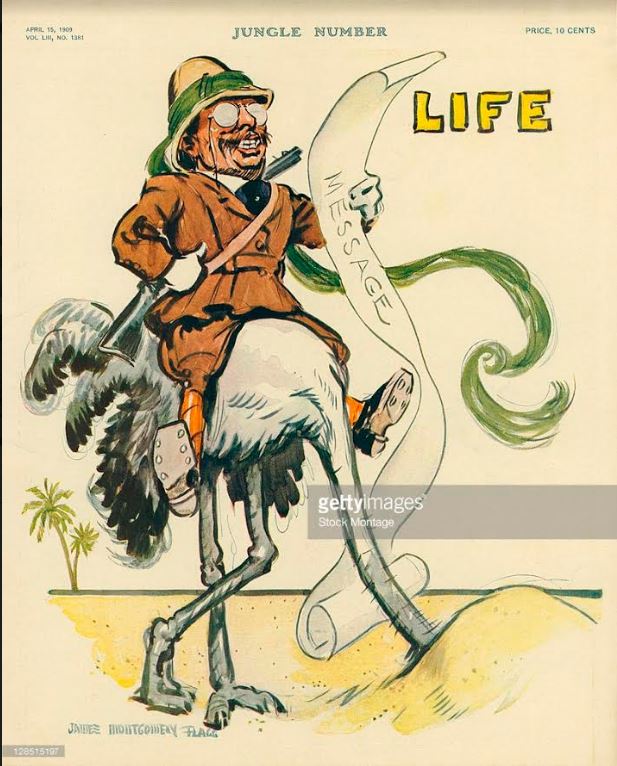 Most dealers and collectors are well aware of the American magazine LIFE, founded by Henry Luce in 1936. Luce’s LIFE became a long running showcase for photo journalism. But few are familiar with the other LIFE, the “old” LIFE, the New York City humor magazine that had an equally interesting niche in the late 19th and early 20th century.

The “old” LIFE (1883-1936) specialized in gentle and not so gentle satire and featured a wide array of artists and illustrators, many of whom became household names. Those whose work appeared on its cover and pages included James Montgomery Flagg, Charles Dana Gibson, C(larence) Coles Phillips, Rea Irvin, Balfour Ker, Cory Kilvert, Orson Lowell, Power O’Malley, and many many more - all with a light touch and a steady hand. In later years Norman Rockwell was a regular contributor. His first cover was published in May 1917 and other Rockwell paintings were featured on LIFE’s cover 28 times between then and 1924.

Though the old LIFE had a long run it’s best years in my opinion were roughly late 1908 to early 1912, coinciding with the presidency of Theodore Roosevelt and overlapping into William Howard Taft. These were big men, big money, big deals and they were big times too. In a way it’s a period that almost directly imitates our own - with larger than life “Capitalism” front and center, income inequality, radical new ideas in the social order (like votes for women), waves of immigration and dramatic new technology including the airplane and the automobile, turning all established norms upside down.

LIFE is collectible both as complete issues of the magazine and/or as individual pieces (such as covers, centerfolds and ads) appearing in the periodical. Though the magazine started out as a black and white publication by 1908 every issue had a color cover, a double page centerfold spread in black and white which often focused on the perceived ironies of the day - be they the expanding empire of Guggenheim in Alaska, the excess of the privileged class, or the newfangled inventions spooking the livestock. Most issues had a full color ad on the back cover, often for the latest in automotive gear including electric cars. The inside pages contained many more cartoons as well as other ads especially for long vanished cars manufactured in fast growing industrial towns like Detroit, Indianapolis, Cleveland and Toledo.

In its editorial pages LIFE had cartoons on virtually every page. Some of LIFE’s biggest and best ones were in the center. These included clever line art by names like Harry Grant Dart, a whiz at predicting what fantastical form aviation might soon take. Another frequent contributor was Harrison Cady (the illustrator associated with Thornton Burgess) whose intricate drawings for LIFE were both complex and amusing. These two artists and other like them spared the feeling of no one: man, woman, bug or beast.

Targets for humor range from the unseemly habits of the recently rich (one centerfold cartoon showing a bevy of ugly damsels each with a purse and dollar signs over her head), another makes fun of presidential excess showing the jungle’s version of TR - a scene filled with animals running from the great White Hunter. There was an unlimited supply of derision for suffrage. From social commentary to sentimental valentines the centerfolds includes them all: pretty Gibson girls, young love, college days, fat people being readied for the cannibal’s pot, rich people looking ridiculous as they crash their airplanes and cars, poor people struggling to get by as the great ball labeled “greed” mows them down.

Among themes that interest today’s collector that show up quite a bit in these early issues of LIFE are the rights of women, anti-vivisection, how people of color are portrayed and attitudes towards Jews and immigrants.

When it came to votes for women the official view at LIFE was “No way.” To make sure the reader was perfectly clear on their point of view the magazine went as far as to sponsor a contest on “Why I would Not Marry a Suffragette” and offered a prize of $300 (a very respectable sum for the day) for the best contributions. They not only solicited entries but published the submissions as a regular feature. In the pages of LIFE women who favored the vote are depicted as stout, grumpy, unappealing, misguided and undesirable. As a genre these anti-women's rights cartoons were well drawn, funny (if you weren’t a woman) and uniformly took the position that votes for women was one one of the silliest ideas ever to come down the pike.

Though they never took it seriously, they gave it a lot of space both in pictures and words, and even devoted special issues and any number special sections devoted to predictions of what would become of emasculated “husbands” should women ever move up a notch in the food chain.

Other topics LIFE did well were explicit and moving, the anti-vivisection drawings showing evil scientists just about to slice up the family dog. They were early with drawings that put forward the then new idea of conservation of public land and preserving open space. Though few of LIFE cartoons were overtly “racist,” race does play a role in many of the images they published. There are lots of cartoons, illustrations and ads featuring people of color, mainly as maids, porters, chauffeurs and other service occupations.

Both immigration and antisemitism make frequent appearances. The tilt against immigrants is palpable, especially against Italians who are depicted as dark and thieving and prone to leave the Black Hand in their wake. Jews are drawn marching in formation all with enormous noses, and also frequently depicted as a nasty bunch whose long reach stretched out to control the New York theaters.

The hot technology a hundred years ago was not the iPhone or the Android tablet, it was the automobile and the airplane. LIFE was one of the first magazines to really cater to the fantasies of the newly rich for speed, mobility and elegance. Early on the magazine gave the new inventions superior color printing, top placement, great typography, impressive copy, vivid art and photos that extol a life of fast cars, ease, luxury and the willingness to drop a bundle on the latest and the greatest automotive technology.

LIFE also ran the line counts on the various models so it was possible not only to see what was being advertised but also how frequently. Among the large automotive ads are both color and black and white for Pierce Arrow, Locomobile, REO, Willys, Olds, Studebaker, Packard cars and trucks, Marmon, Baker Electric and indeed electric vehicles of all kinds, not to mention tires, accessories including horns and speedometers.

What pages LIFE did not fill with snappy patter, cartoons, jibes at women, and car ads they saved to extol the virtues of guns (You should have one, a small one if you’re a lady), breakfast cereal, soap (Ponds, Mennen, Ivory), nice clothes from Brooks Brothers and rather awkward looking garters for your socks, not to mention Coca Cola, Wrigley’s gum and stiffer brew in the form of beer and spirits.

Reading "old" LIFE in the age of Trump is to realize we’ve already been down this road at least once before and lived to tell about. It’s all there from the 1% to micro-aggressions played out in an earlier incarnation that’s now more than a century old.

If you keep an eye out for the “old” LIFE watch for names that will appear again in a larger or different context. Two that come to mind are Walt Kuhn, an American cartoonist and artist who drew for LIFE in its early years and went on in 1913 to be one of the principal organizers of the Armory Show. He was a painter of some note by the time the 20s rolled around. Another fine artist, Edward Borein, best known for his scenes of life in the American West, appeared from time to time as the illustrator for Pierce Arrow car ads.

I don’t really see a lot of issues of LIFE being offered as complete magazines or as bound volumes. What I do see is individual pages or work by individual artists. Particularly popular are the fade-away girls of C. Coles Phillips and the iconic women of Charles Dana Gibson as well as and other images by the popular artists of the day like James Montgomery Flagg.

When it comes to recent selling prices they seem to range from about $20 for a nice centerfold to over $200 for the prized issue with Teddy Roosevelt riding an ostrich on the cover. When offered as individual issues most of these magazines are still in the $25-$50 range.

The “old” LIFE ended in 1936, when Luce bought the name for his new, but unrelated periodical. Don’t confuse them, there’s nothing that ties them together except the name. In the meantime the “old” LIFE is still a great place to find illustrated ephemera and political and social commentary of the period.

Links: Here’s a site that carries a good inventory of “old” LIFE all years and displays the individual issues in a visual format.