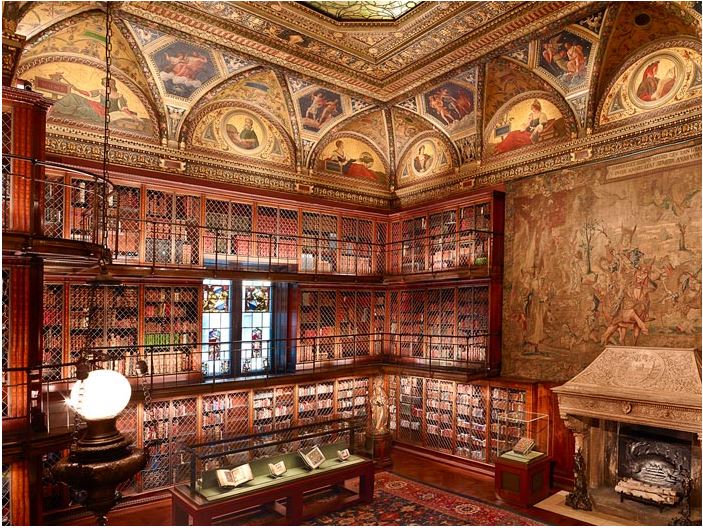 An unusual study of old books and smells is taking place at the Morgan Library in New York, combining the library, students from the Columbia Graduate School of Architecture Planning and Preservation, and the company International Flavors and Fragrances. The students are placing a clear, bell-shaped device, with sensors at the top and an air hose running to the side, on top of old books and whatever else they want to sample. The samples are then taken to IFF where they will be analyzed in the months ahead.

They aren't sampling just any old books, or any location in the building. The work is being done in the personal library of J. Pierpont Morgan, the turn of the century extraordinarily wealthy banker, industrialist and philanthropist, who used some of that wealth to collect rare books. He left his library to the public when he died. That was over a century ago, but his personal library hasn't changed all that much since he left.

This study was recently reported in the art blog Hyperalleric with a follow-up from the New York Times. I must admit that after reading both articles, I'm not quite sure why they are doing this. It is certainly an esoteric study. The Times came closest to understanding the intent, noting that maybe it could be used to recreate the smells of the old library for an exhibit, to "experience the library in a different way." They quoted Christine Nelson, a curator at the library, with the mystical explanation, "When we started this, we didn’t really know where this would go, and we still don’t, quite; it’s still an experiment." Whatever the purpose, the smell of old books is distinctive and a magnet to book collectors. It is not a pleasant aroma on its own, but an associative one, like "new car" smell, mainly a byproduct of glue, vinyl, plastics, and lubricants, people love only because they associate it with new cars.

We should note that this is not the first study done on the smell of old books. A study was conducted and posted to Analytical Chemistry in 2009 entitled Material Degradomics: On the Smell of Old Books. This one had more of a specific purpose – to help conservators preserve the old books under their care. Different books give off different odors depending on their paper and other elements of composition. These differences may not be easily recognizable to humans, who probably lump them all together as being the smell of old books. However, when instruments designed to calculate the chemical compositions of the VOC's (volatile organic compounds) are used to determine their precise make up, the composition of each book can be determined. This, in turn, allows conservators to determine the best course of action to preserve each particular book based on its precise composition.

The authors of the study, Matija Strlic, Jacob Thomas, Tanja Trafela, Linda Cséfalvayova´, Irena Kralj Cigic´, Jana Kolar, and May Cassar, described the smell as, "a combination of grassy notes with a tang of acids and a hint of vanilla over an underlying mustiness." This sounds like wine-tasters language. The most important compounds and factors, they determined, are rosin, lignin and carbonyl group content, degree of polymerization of cellulose, and paper acidity. Around 1850, rosin replaced gelatin to make ink adhere to the paper. Aluminum sulfate was used to get the rosin to precipitate to the fibers. Aluminum sulfate is acidic, explaining the more rapid deterioration of paper common to post-1850 books.

For chemists seeking more detail about the literally hundreds of volatile and semi-volatile gasses given off by the old books, those most commonly found were acetic acid, benzaldehyde, 2,3-butanedione, butanol, decanal, 2,3-dihydrofuran, 2-ethylhexanol, furfural, hexadecane, hexanal, methoxyphenyloxime, nonanal, octanal, pentanal, and undecane.