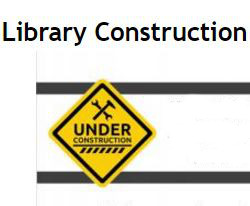 Here is a story of a library book theft that is a bit of a head-scratcher. The security must have been slightly lax at the Flower Memorial Library in Watertown, New York, on January 4. Before sounding too tough on the library, the alleged thief, 34-year-old Tiara Holbrook, intentionally or not, was taking advantage of a complicated time at the library. A major construction project is underway which requires the temporary moving of many books to different locations. It could have made it harder to notice misplaced books when so many are, in effect, "misplaced."

The modus operandi of the alleged thief was to break into a display case, take out some valuable old books, rip off the covers of an ordinary book and stick the valuable ones inside. This is not the most sophisticated type of library theft and one probably couldn't get away with taking a Gutenberg Bible this way. However, this is not a library with a major collection of antiquarian books, and while the stolen book was not something of no value, its theft only qualified for petit larceny. One surmises Flower Memorial has greater safeguards for higher value books.

According to reports, a security guard discovered a woman in a roped off room, standing next to a display bookcase with an open glass door. She was removed from the area, but allowed to go on her way. However, other library personnel found her a short time later on another floor, near two books that should have been locked in the display case. She also had an ordinary book which had been ripped apart to conceal a more valuable one. It is not clear why library staff did not call the police. Rather, they escorted the woman out of the library.

It was not until after she left that officials reviewed the surveillance tape and understood what had happened. It showed that she had scratched the display case and broken a lock in it, causing an estimated $1,000 in damage. It also showed her removing books from the restricted area. On further investigation, they realized that one of those books was still missing.

Police officers were able to identify the suspect from the surveillance tape. Perhaps this was because it was not the first time they had interacted with her over fairly petty crimes. When she was arrested on January 13, she was actually in custody at the county court on unrelated charges. She was charged with two counts of criminal mischief, for damaging the antique bookcase and a library book, and one of petit larceny for stealing a book.

This case will not go down in the annals of master book thefts. In a world where increasingly sophisticated book thieves try to fool increasingly sophisticated library defenses, this case is a throw back. The library did not do a particularly good job of protecting its semi-valuable books, but it proved to be just enough to stop a careless thief. The price of a rare book collection is eternal vigilance.