A Spectacular Collection Emerges from the Shadows 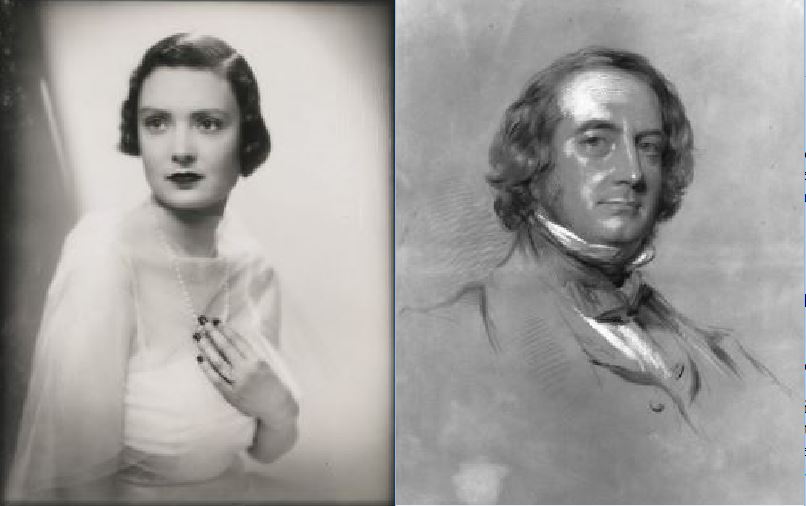 The Duchess of Roxburghe and her grandfather, Richard Moncton Milnes (from Trinity website).

Once in a while, a long-forgotten collection of books emerges from its hiding place, usually after the death of a very old, unknown collector. Such a collection recently emerged in England, and it is one of the most spectacular finds in recent memory. Along with some signed books by important writers there were numerous one-of-a-kind documents that will add to our historical knowledge. Though in Britain, there was even a handwritten letter from George Washington. The librarian of the recipient of the collection, Trinity College Cambridge's Dr. Nicholas Bell, described it as "one of the most important private collections in Britain." He was not exaggerating.

There were approximately 7,500 items in what is now known as the Crewe Collection. There is much cataloging to be done before the full extant of the collection is understood, but here are a few of the books and papers known to be included. Along with the Washington letter, there are previously unknown manuscripts from Napoleon, Charles Dickens, and Florence Nightingale. There are inscribed books by Oscar Wilde and William Beckford, and rare early editions of Shelley's poems. Tennyson, Byron and Wordsworth are also represented by first editions. There is the most highly sought collection of American poetry – a first edition of Walt Whitman's Leaves of Grass. There are also rare pamphlets pertaining to the 1848 French Revolution and the American Civil War. Some of the works are oddities, such as rare transcripts of trials for murder, forgery, and witchcraft. Probably the oddest item of all is a piece of Voltaire's dressing gown.

Almost as fascinating as what is in the collection is the story behind it. Where have all these books been? The answer is that they have been on shelves, suitcases, and other locations in the home of the late Mary, Duchess of Roxburghe. Mary was born in 1915, the daughter of Robert Crewe-Milnes, 1st Marquess of Crewe. She was named for her godmother, Queen Mary. She was intimately involved in various royal ceremonies, including the coronation of King George VI and Queen Elizabeth in 1937. She was herself married to the 9th Duke of Roxburghe in 1935 at Westminster Abbey. She was active in various causes during the war and always supportive of numerous charitable activities.

In time, her marriage to the Duke turned sour. The breakup became particularly public when the Duke tried to kick her out of the family estate in 1953, and for six weeks, she refused to budge. He turned off the power, water, and such during the standoff. Late in the year, she was granted a divorce. In the ensuing years, she continued to be involved in charitable activities and attended various functions, though without the notoriety of her split with the Duke. In 1966, she inherited a large estate in Surrey from her mother, where she lived the remainder of her life. Presumably, the books were there when she arrived. Mary, herself, was not a book collector.

The books were in the collection of her father. Robert Crewe-Milnes was born in 1858, died in 1945. The existence of the books has been virtually unknown to anyone since his death. Prior to becoming a Marquess and obtaining his hyphenated name, Crewe-Milnes was simply a baron, Lord Houghton. He inherited that from his father. He became Marquess of Crewe when his childless uncle died in 1894. Then, Lord Houghton not only inherited the Marquess of Crewe title, but also estates totaling almost 50,000 acres, with plenty of rents. It is not surprising that his book collection would be of the highest order.

However, it was not Crewe-Milnes who was the most notable family book collector. It was his father, the first Baron of Houghton, Richard Monckton Milnes, who was the most involved in the book world. Moncton Milnes was a poet and patron of literature. Both he and his son were important politicians, holding various government offices. Moncton-Milnes was born in 1809, and died in 1885. Much of what the Duchess left to Trinity was originally collected by her 19th century grandfather.

Moncton Milnes was born to a family of wealth and significance. Both his father and grandfather had inherited estates and were Members of Parliament, as was Moncton-Milnes. They supported progressive causes, from his grandfather's support of abolition, to his own for woman's suffrage, universal education, and abolition of the death penalty, to his son's support for retirement pensions and shorter working hours for miners. He was educated at Trinity, where he developed his literary interests. He became friends with Tennyson and Thackeray among others. In London, he came to know many other literary figures, such as Dickens, Trollope, and Wilkie Collins. Later on he came to count Wilde, Henry James, and travel writer Richard Burton among his friends. These connections explain why he had so much personal material from great writers in his collection. Though he dabbled in writing himself, it was his enthusiastic support of other writers and his outgoing, friendly manner that generated his many friendship.

In 1848, Moncton Milnes traveled to France to witness the ongoing revolution against Louis Philippe. He collected material pertaining to those times while there, explaining the large number of items of French revolutionary origin in this collection.

Moncton Milnes was very fond of Florence Nightingale. For nine years he attempted to win her hand. Ultimately, she rejected his proposal of marriage. She had a calling and feared marriage would interfere with her nursing work. Ms. Nightingale never married. Milnes married another, but named his daughter "Florence," novelist Florence Henniker. He did end up with some of Nightingale's manuscripts in his collection.

While his son, Robert Crewe-Milnes, also appreciated fine literature and wrote a number of works himself, he was not as outgoing as his father and does not appear to have had the connections of his father in the literary world. Nonetheless, he maintained the fine library and passed it on to his wife, and she in turn to his daughter, when they died. When representatives of the Trinity Library visited the estate, they found "books everywhere," shelves in most rooms reaching to the ceiling, more books on the floor. Then, in the Duchess' bedroom, they found an old blue suitcase in a closet. When they opened it, Dr. Bell said, they realized this is what she must have been referring to as "the holy of holies." It contained some of the best, such as the Leaves of Grass, inscribed Wilde material, and the fragment of Voltaire's gown. In the coming days and months, we should begin to learn more about this collection, begun by the Duchess' grandfather almost two centuries ago.