Bookplates 1480-Present on Display at the Rosenbach 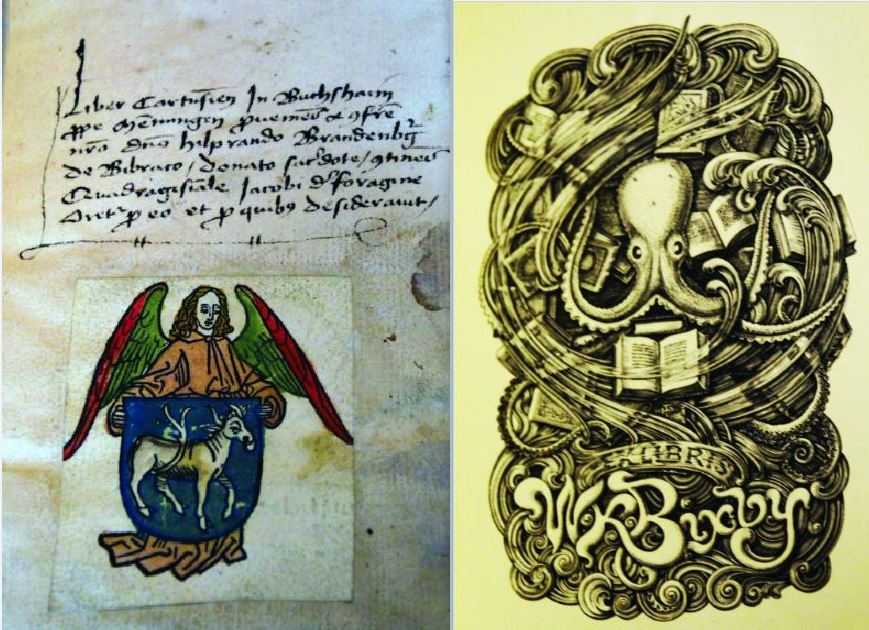 Twenty-five years after the invention of the first printed book, there appeared the first known example of an intimately connected printed ephemeral item – the bookplate. The bookplate is the subject of an ongoing exhibition at The Rosenbach of the Free Library of Philadelphia. The title of the exhibition is The Art of Ownership: Bookplates and Book Collectors from 1480 to the Present. It is running from now until January 17, 2017.

The average book owner of days gone by relied on a more primitive means of establishing ownership of a book. They would write their name on the title page or a blank page near the front. Often their name would be followed by "his book," or "her book," or "my book," just to make sure the meaning of their signature was clear. However, for those of greater means who established personal libraries, rather than just some books on a shelf, something a bit classier was required. They would print up a bookplate establishing their ownership. As time went on, some of them became very elaborate, occasionally works of art in themselves, sometimes even designed by notable artists.

The first known printed bookplate (click image above left for detail) belonged to Hilprand Brandenburg of Biberach, Germany. It is a woodcut, printed in black, and then colored by hand. Ironically, it is not in a printed book but in a 1408 manuscript, predating Gutenberg's press by almost half a century.

Other bookplates come from the personal libraries of King George III (the George Americans don't like), and Eleanor and Franklin Roosevelt. There is an Irish landscape designed by Jack Butler Yeats, and prints by Art Nouveau illustrator Aubrey Beardsley. Then there is the bookplate of William Keeney Bixby (see image above left). It depicts Mr. Keeney as an octopus, each of his tentacles grasping a book. The plate of E. Norman Sabel shows a book reader so focused on his book he has failed to notice that his coattails are on fire.

Also in the collection is the art deco lyre of composer Jerome Kern. To most of the world, Kern is known for writing songs such as Ol' Man River and Smoke Gets in Your Eyes. In the book world, Kern is known for his exquisite timing. He compiled a fabulous collection of books which he sold in 1929, shortly before the stock market crash. He achieved prices that would not be seen again for decades, as the value of books, like everything else, crashed during the Depression.

Another bookplate is that of a man with just the opposite type of luck. Harry Elkins Widener seemed to be a fortunate man. He was born to a fabulously wealthy family. He put together a fantastic book collection at an age when most young people are still trying to figure out what to do with their lives. Unfortunately, that wealth also enabled Widener to purchase a ticket on the maiden voyage of the Titanic. He was just 27 years old. His mother devoted herself to completing his collection and donating it and the money needed to build the Harry Elkins Widener Memorial Library at Harvard University.

The exhibition features bookplates from the Rosenbach's collection, others from the Rare Book Department of the Free Library of Philadelphia, the University of Delaware’s William Augustus Brewer Bookplate Collection, and other institutions. It was made possible through grants from the Pine Tree Foundation of New York, the Marilyn M. Simpson Trust and the National Endowment for the Humanities.