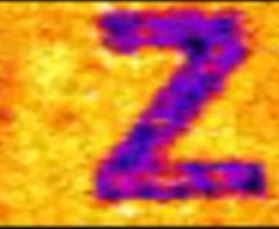 Image of a letter inside a book (from MIT News).

A recent announcement from the News Office at MIT (Massachusetts Institute of Technology) revealed progress in developing a device that will one day allow books to be read without ever turning their covers. This is not meant to aid really lazy people or those whose only experience with books is through electronic readers, and consequently have no idea how to read a physical one. MIT research scientist Barmak Heshmat explained, "The Metropolitan Museum in New York showed a lot of interest in this, because they want to, for example, look into some antique books that they don’t even want to touch." Collectors are well aware of this phenomenon. Opening an old book is tantamount to degrading it a little more.

The science, in unscientific (layman's) terms, is something like this. A machine emits something like x-rays at a book, only they aren't x-rays. They are terahertz rays, a band of radiation somewhere between microwaves and infrared light. This spectrum provides some advantages over other bands of radiation. Separate chemicals absorb the terahertz frequencies differently, so that it is possible to distinguish between the reflections of each chemical. Since the compositions of paper and ink are different, the reader can distinguish between the returning radiation from each.

Terahertz radiation has another advantage over other frequencies. It can be emitted in ultra short bursts. This allows the device to measure the length of time it takes the rays to bounce back, which varies depending on the depth of a page inside a book. Since there is an air space (admittedly minute) between pages providing a boundary between them, the machine can read the returning rays from each page separately, depending on how long it takes them to return.

Of course, none of this is as easy as it sounds. One problem is that the reflected radiation can bounce around between the pages. That means some will return later than it should. Therefore, there is a certain amount of interference. This needs to be filtered out to get an accurate reading of what is on the pages. The deeper one gets into a book, the more of a problem this poses. At this point, the camera can distinguish pages up to 20 deep. It is able to accurately read letters up to a depth of nine pages before being overwhelmed by the interference. The stack of paper tested had one letter on each page, so one imagines it may be harder to decipher a page full of letters than a page containing a single one. MIT scientists, with the aid of those at Georgia Tech, are developing algorithms to better interpret the returning images, but obviously it's going to take some time before a practical closed-book reader is available. But, it will happen.

As the scientists explained in their paper, "The method uses the statistics of the reflected terahertz electric field at subwavelength gaps to lock into each layer position and then uses a time-gated spectral kurtosis to tune to highest spectral contrast of the content on that specific layer." Or, as Laura Waller, Associate Professor of Electrical Engineering and Computer Science at the University of California at Berkeley explained in English, "This work is one of the first to use these new tools along with advances in computational imaging to get at pictures of things we could never see with optical technologies. Now we can judge a book through its cover!"