June 16: The Holy Grail of Alice in Wonderland Collectors Comes to Auction at Christie's 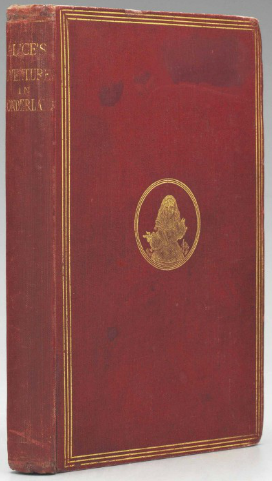 I am often tasked with covering auctions on material I'm no expert on. I do my best to highlight material I think many would find interesting and provocative. Usually I can go off the estimates to determine rarity and signifiance in addition to keying in on lower profile items that catch my particular eye. But sometimes sales come up that are so specific in their scope that I feel I'm out of my league. An auction taking place at Christie's New York on June 16th falls under this category.

Alice's Adventures in Wonderland is a single lot sale. Two items are included. The first, carrying the weight of the $2,000,000 to $3,000,000 estimate, is a copy of the rare, legendary rejected "1865 Alice." The second item is an albumen print taken by Lewis Carroll of Alexdra Rhoda Kitchin, the second owner of the specific copy of Alice being auctioned, with an inscription by Carroll.

The rarity of this 1865 Alice is enormous, monumental even. It is the original printing that was quickly suppressed and recalled because the illustrator John Tenniel was dissastisfied with the quality of the illustrations' printing. A mere fifty books were printed of the intended 2,000. Twenty-two copies are known to exist today; sixteen are in institution hands, with six in private collections. Qualifications of this particular copy's rarity do not stop there though. Of the six copies outside institutional walls, four are rebound and two remain in original cloth. Of those two in original bindings, one is described as heavily worn. On June 16th, the best copy of the 1865 Alice in original cloth will be brought to auction. This run is identified with the "1865" notation because the first authorized edition was not printed until the following year.

I cannot honestly do this lot justice in an attempt to describe the importance of Alice's Adventures in Wonderland. Three men, all of whom have invested significant time into the collecting of or study of Lewis Carroll's work have contributed well-written and informed pieces in the lot's description. Jon A. Lindseth, the current owner of the copy being auctioned, provides perspective on the magnitude of Alice in the world, as well as the story behind his collecting. Selwyn Goodacre, a collector himself, an editor of Carroll books, and former chariman of the Lewis Carroll Society, goes into depth on the rarity of the 1865 Alice. And Edward Wakeling, compiler of The Photographs of Lewis Carroll, A Catalogue Raisonné, writes a piece filling in the backstory to the photograph included in the sale.

The lot is exceptionally described, and is not a longwinded piece—it is well worth reading. It can be found it its entirety here on Christie's website. If you intend on bidding at the auction, registration with Christie's is required.