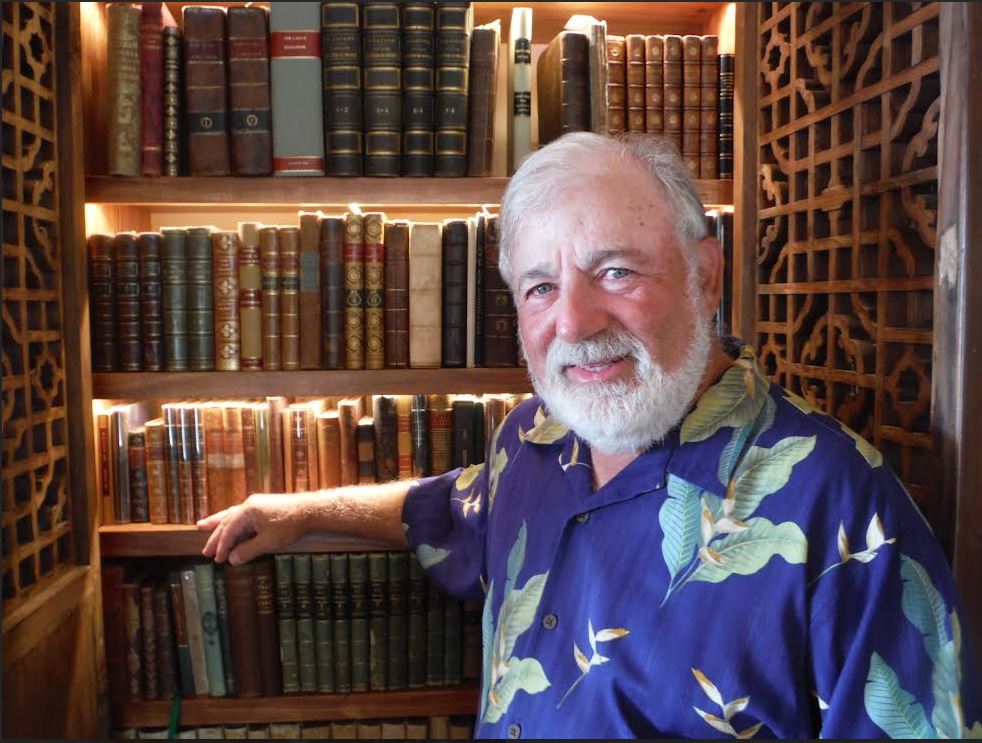 Louis Weinstein became a serious collector of pre-1900 Hawaiiana after retirement from Heritage Book Shop in 2007.

There are many things remarkable about Louis (Lou) Weinstein, a former partner in Heritage Book Shop Inc. on Melrose Ave. in Beverly Hills, CA.

For one thing, when Weinstein started in business in 1962, his firm based in Compton, CA, (one of LA’s notorious down-market neighborhoods) was known as BJ Merchandisers, which stood for Ben and Jerry. Both Ben and Jerry were his brothers. He soon bought Jerry out and with Ben as his partner their initial venture was a store selling items like broken toasters and clocks with one hand. (See link at end of this story for reminiscence about their first year in business.)

The pair labored at the bottom of the food chain until 1963 when they moved their shop to Hollywood Boulevard and changed their name to Heritage Book Shop and began to deal exclusively in books. They stayed there ten years and moved to La Cienega Boulevard in West Hollywood. In 1984 they moved to their well known Beverly Hills location.

In business for 45 years, Heritage was a high end antiquarian book shop. Many of its clients were drawn from the famous and not-so-famous ranks of the entertainment industry. At its height Heritage had more than 35 employees.

But, unlike many in the antiquarian trade the brothers had the foresight to purchase their own building and Melrose Avenue real estate went up in value - way up. When they decided to retire in 2007 the property alone brought a reported $10 million dollars, while their inventory of rare volumes generated additional millions. The Heritage reference collection, consisting of 13,000 books, was donated to the William Andrews Clarke Collection at UCLA.

Many dealers start out as collectors and then gravitate to the trade, but Weinstein reversed that pattern. A long time visitor to Hawaii he bought property on Maui - and then, a few years after retirement, he became an enthusiastic and aggressive Hawaiiana collector. His interests focus on material including books, photos, maps, and ephemera related to the islands, most from before 1900.

Asked about his motivation for retirement he replied, "There were several reasons, not necessarily in this order. The market was strong in mid-2007 and common sense suggested to avoid selling in a weak market. I wanted to travel with my wife without a schedule. At the time we had 30+ employees and one must sell a lot of books to feed so many mouths. I'd been coming to Hawaii annually for over 25 years and I knew that's where I wanted to spend my final decade(s). We now live here almost 8 months a year."

"I believe all booksellers are closet collectors," he explained, "truth being this passion carries on to their clients and makes them better dealers. We've always taken the position that one should collect what they love therefore Hawaiiana was a natural pursuit. More importantly, I spent a lifetime cultivating collectors thus the thought of forming my own collection came easily and with confidence. I had the basic ingredients of a collector, enthusiasm, an understanding of what things are worth, familiarity with the required bibliographies and for the most part … capital."

Currently he gives "three to four hours every day to reading, searching for material and researching … all great fun. My pre-1900 criteria is based on my admiration for David Forbes’ monumental four volume Hawaiiana bibliography covering the period 1780-1900."

Indeed a visit to Weinstein’s South Maui home and a chance to browse through what he’s accumulated in only a few years would make the heart of any Hawaiiana enthusiast beat faster.

He has all the usual voyages and travel, but he also has lovely, quirky, odd and unusual ephemera, including photos, letters and volumes like the first bi-lingual English-Japanese cookbook printed in Honolulu. There are also many maps and signed association material, and all of it displayed in the nicest frames, bookshelves, clam shell boxes and upscale bindings.

Of particular interest is a small book of sketches and water colors done by Rear Admiral Lewis Kimberly in 1887-1888. At that time Kimberly was in command of the US Naval Fleet in the Pacific. The small book is filled with charming views of ships, as well as Hawaiian landscapes and native people. Kimberly also wrote illustrated letters back to his young daughter, Elsie. Along with words he filled the pages with whimsical sketches including one delightful example from the same period that has pig, poi and paddle along with a sketch of a traditional thatched native building.

"In my collection of 1000+ items," Weinstein said, "about five percent are post-1900, for it would be unwise to exclude some 20th century classics. Additionally, when the Hawaiian Monarchy ended (in 1893) and the United States annexed Hawaii in 1898 a new era in history began. An ambitious collector could easily accumulate material from 1900-1950, but it would lack the voyages and missionary history. These are the strength of my holdings."

Asked about his collecting goals, he replied, "I have the luxury of not having to decide. Good health keeps the urgency away."

Weinstein also works occasionally as a consultant. "I'm still doing some appraisals for old clients," he said. "The need arises in donations and occasionally I advise on acquisitions. I seek no one out, but somehow I am found even though I spend most of my time in the middle of the ocean."

He mentioned that recently he visited a university library in Hawaii where he saw a valuable volume that was about to fall apart - yet he could interest no one in taking steps to have the necessary conservation work done. Commenting on that situation he said, "For years I've been encouraging libraries to increase their budgets for restoration of rare books and manuscripts. It is important that they don't over invest in items that can be replaced at less than the cost of restoration. Thus, a good relationship with a local bookseller is always helpful. If budget restrictions are a problem then consider releasing some duplicates to cover the restoration. Again, find someone you trust and work with them."

And what happened to Ben?

"Everyone now knows that retail bookshops are disappearing," he said. "The only ones that survived in both the new and antiquarian world are the creative ones who diversify and the specialist dealers. Owning your own property is also the only way to protect yourself against inflation."

"I believe the future in reading and learning will never die," he continued, "but booksellers’ methods must adapt to the new technology. Books - as objects - will remain for generations to come, but they too will be replaced by the tablet. Bottom line … too early to give up on book selling as a profession, but do encourage your great-grandchildren to be open to other professions."

To read more about Lou Weinstein’s first year as a dealer in Compton, Ca. please click to the next page (below) which leads to his article published in 1982 recalling the brothers’ first year in business ca. 1962-63. This piece was originally published in the ABAA trade journal, “The Professional Bookman.”

Booksellers with material appropriate for Mr. Weinstein's collection may reach him at