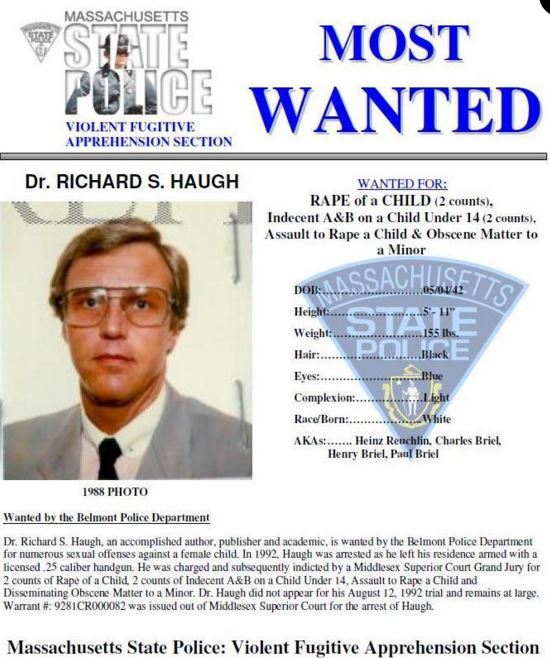 Haugh's wanted poster, with his picture taken at age 46.

An author and scholar on Eastern Christianity and other topics pleaded guilty to 30 counts of mail fraud on October 21. He was sentenced to 20 months in prison, in his case, time served. Dr. Richard Stanley Haugh had an outstanding reputation as an academic. He had been an Assistant Professor of Religious Studies at Iona University. He was also a Visiting Professor of Church History at Rice. Earlier, he was a fellow in residence at Harvard. Add to that being one of the founders of the prestigious Falmouth Academy on Cape Cod. Dr. Haugh was also the recipient of numerous awards. And one more thing – he was a bookseller, though perhaps we should say "bookseller."

Just what made Dr. Haugh go so terribly wrong is not clear. A desire for money was certainly part, but if charges he still faces are true, he had much darker desires. According to charges to which he pleaded guilty, in 1989 Dr. Haugh used his reputation to open a business called Notable and Academic Books from his home. He later opened another, called Editions Briel, using the aliases Heinz Reuchlin and Paul Briel. He also claimed to be the representative of Buecher Vertriebs Anstalt, a Lichenstein business specializing in rare and scholarly books.

Next, Haugh began mailing brochures to various institutions, claiming to offer translations of early Christian works and an encyclopedia of such books he claimed to have authored. He required prepayment. The books did not exist. Nonetheless, he was able to secure prepayments from 150 universities, churches, seminaries, and individuals. They came from the United States, Canada, England, Australia, and Japan. The U. S. Attorney for Massachusetts listed Smith College, Cornell University, Bates College, and the University of Michigan as being among his victims.

By 1992, Haugh was in big trouble. He was arrested that year at his Belmont, Massachusetts, home. Haugh was armed with a licensed handgun. By now, the mail fraud was the least of his worries. He was indicted on charges of rape and other sexual misconduct with a girl under 14 years of age. Haugh claimed innocence, but didn't wait around for a jury of his peers to confirm it. He took off for parts unknown. His whereabouts remained a mystery for decades.

In 2013, Haugh posted an "Open Letter from Dr. Richard Haugh" on the internet from his hiding place. It was a rambling claim that he never committed rape, the girl (now in her 30's) was lying, there was prosecutorial abuse, his life was in danger, America convicts lots of innocent people, and the like. It is not the type of screed one usually associates with scholars, or innocent people for that matter, though he is entitled to the presumption of innocence on the more serious charges until someone proves otherwise. He did not address the mail fraud claims in his letter.

In 2013 or 2014, authorities became aware that he was hiding in Colombia. With some help from the State Department, they arranged for Colombian authorities to arrest him. Haugh was nabbed in a taxi. He was on an intercity journey carrying packed suitcases. Colombian officials believed he was trying to flee again.

Haugh was returned to the U.S. in February 2014. He had been awaiting trial ever since. With the plea bargain on the mail charges, Haugh will have to serve no more time in prison on that fraud. He is still liable for $167,883 in restitution. However, Dr. Haugh is not a free man. He has been turned over to authorities in Belmont to face the rape charges. If convicted, he may well never see the outside of a prison again. When asked by the press, his lawyer did not respond with any bombastic claims of injustice. He did indicate that he did not think Haugh would plead guilty to these charges, but did not rule out the possibility. When Haugh took off, he was 49 years old. Now he is 73. He will finally have his day in court – like it or not.