In The News: Gems Found in Old Booksellers' Inventory, Edith's Rattle, and More 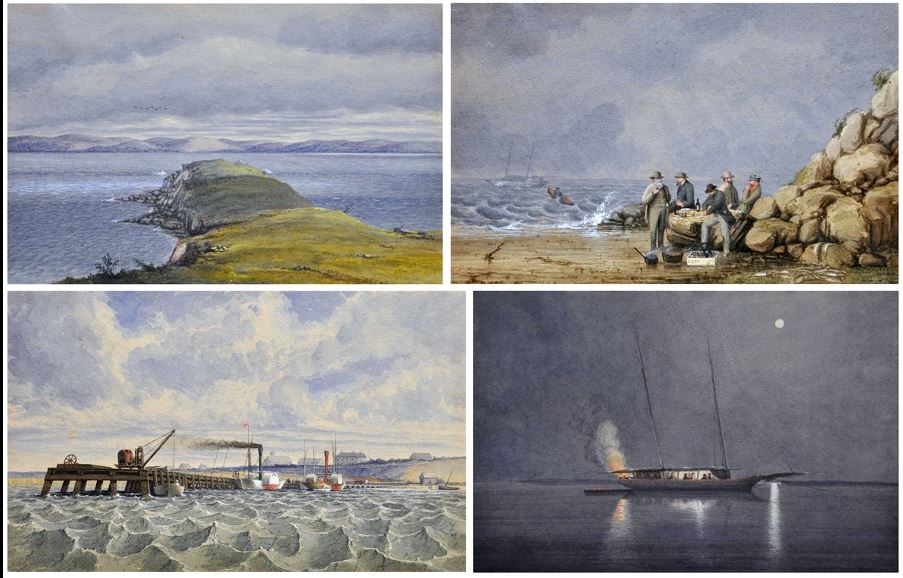 Once in awhile, a surprising item can turn up in the inventory of some old booksellers. This news came out of Australia a few weeks back. Jim Elder, of Elder Fine Art and Auctioneers, was tasked with going through the collection of two retired bookselling partners from Adelaide. Arthur Chard and Lex Rabbits, known professionally as Chard & Rabbits, had been in the business dating back to the 1950's. Mr. Chard died in 2003 but Mr. Rabbits still lives in a retirement home. As occasionally (okay, perhaps more than occasionally) happens, their inventory was sort of scattered, with items stuffed in various boxes, not well organized or inventoried.

Within the collection of 5,000 old books, prints, albums, and art was a plain envelope. Within it were four small paintings. The artist was Colonel James Hesketh Biggs. Biggs' name is not well known today, not even in Australia. Part of that is his own fault. He didn't sign his paintings. Fortunately, these four paintings had their titles and painter's name on the back. Those who know Biggs' work would be able to recognize these works. Small paintings were his specialty, and his detail which can take a magnifying glass to appreciate is remarkable.

Col. Biggs, naturally enough, was an army officer. He was also an amateur artist, who, along with being a painter, was a photographer and engraver. He mostly painted scenes. These four are from South Australia, each depicting views along the coast. A boat, pier, and some men having a picnic on rocks along the shoreline are featured. Biggs also must have spent some time in India as a number of Indian scenes are also found in his work, though not among this group.

Col. Biggs was well known in his day. He won several Australian prizes for his work in the late 1860's and early 1870's. Unfortunately, most of his work is lost today, either because small paintings can more easily disappear, or because owners do not know who the artist is. Because of their rarity and the quality of his work, auctioneer Elder described their value as "incalculable." We almost had a chance to calculate that value as they were scheduled to be sold at auction on October 11. However, that will have to wait as the paintings were withdrawn from the auction at the last minute for unstated reasons.

AbeBooks notes a most unusual item offered on their site. It's not a book, but it fits, sort of, the category of book-related ephemera. It's a baby rattle that once belonged to American novelist Edith Wharton. It is not an ordinary plastic rattle, as not even being touched by Wharton's youthful writing hand would alone justify a price of $16,500. It is made of sterling silver, with a red coral teething section. Coral apparently relieved the pain of teething. The intricate design of the rattle includes a whistle. It is engraved with the name "Edith." It is something that would only have been found in a wealthy family. Edith's family was quite prosperous. AbeBooks describes the item as "the most unusual item to be listed for sale on AbeBooks since Eugene O'Neill's underpants in 2013."

The Boston Public Library has terminated the employment of its former Head of Special Collections, Susan Glover. Ms. Glover had been caught up in the case of the missing Albrecht Durer print, valued at $300,000, last spring. Ms. Glover had been aware for almost a year that it was lost when she informed Library President Amy Ryan it was missing. Ms. Glover did not consider it a major issue as this has happened before in the not well organized, cramped special collections, where items can be misfiled.

However, Ms. Ryan was not pleased and quickly placed Ms. Glover on leave back in May. Fears mounted that the print had been stolen. The police were called in, and just a day ahead of a meeting between city and library officials, the print was found, misfiled some 80 feet away from where it should have been. Nonetheless, Ms. Ryan, who had tendered her resignation because of the scandal, left, and so did the Chairman of the Board of Trustees. A report compiled by an outside consultant around this time was highly critical of the library for poor record keeping and a lack of rational order in its storage of special collections. However, it also was highly critical of the city for providing insufficient funding to manage and store collections of the size of those at the Boston Public Library. Now, Ms. Glover has been terminated without ever coming back from leave, with Beth Prindle appointed Acting Head of Special Collections until a permanent appointment can be made.