Next Time Ask for a Signature - $7,000 Bible Stolen from Front Door 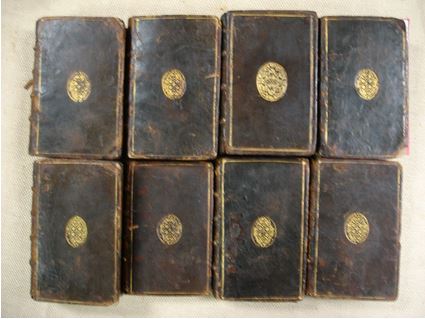 It's useful to have a lesson in care every once in awhile when you are in the trade of selling valuable books. Last month, we saw the case of a bookseller who allowed her “friend” and neighbor unmonitored access to her home-shop, only to discover some of her books being sold on eBay. This month we have the case of a bookseller who sold a $7,000 book but forgot to require the buyer sign for it on arrival.

Gene Albert is a seller of religious tracts based in Virginia. In 2006, he established the Christian Heritage Museum in Hagerstown, Maryland, to display his collection of 20,000 bibles and other artifacts, but that museum has since closed. He sold a substantial part of his collection to Steve Green, President of Hobby Lobby, who is building a bible museum in Washington. Albert remains in the book business and estimates he has sold $3 million worth of religious artifacts over the past decade.

One of those artifacts was an eight-volume compact set of the second Robert Estienne Hebrew Bible from the 1540's. This copy once belonged to Scottish politician Andrew Fletcher who lived during the late 17th and early 18th century. Albert sold the set to Jacob Gestetner of Monsey, New York. The price was $7,000. Albert estimated its worth as several thousand dollars more, but at times it's better to have some cash flow than to hold out for a full price.

Albert shipped the bible off by mail but neglected to do something he says he always (almost) does – require a signature on delivery. The result is that when the postman brought the book to the door, he left it there. That is normally what the post office does when no one is home and no signature is required. To make matters worse, Albert did not insure the package. He said that it was in a box that did not look like something of value was inside and he did not want to create such an impression by having an insurance sticker on it. Postal records show the package was scanned in Monsey and delivered to Gestetner's residence.

It wasn't there. Postal records confirm it was delivered, but it was left by the door. Gestetner says he never found it. In an interview, Albert sounded exasperated by his customer. He said it took a week for Gestetner to get back to him after he asked the latter to check with his mail carrier. Gestetner declined to comment on the situation, labeling it a private matter. Albert filed a claim with the post office, asked several local synagogues to keep an eye out for the bible, and had the ABAA (Antiquarian Booksellers Association of America) post it with their database of stolen items so that booksellers will be on the lookout. However, unless it is found, it is Albert who will be out the money. The book was purchased on eBay, and that site requires its sellers to refund the purchase price if they can't establish delivery. What actually happened to the bible is, of course, unknown, but unless something else can be established, the presumption is that someone picked up the package in front of Gestetner's house and walked off with it.

The moral here is obvious. If you're shipping a cheap, used book, it probably isn't worth the cost or inconvenience of requiring someone to sign for it. Its loss is insignificant. For a valuable book, and $7,000 is many times into the valuable range, not requiring a signature (and insurance too) is a way too risky gamble. Ask Mr. Albert.

A description of the missing bible can be found on the ABAA website at the following link: www.abaa.org/blog/post/reported-stolen-8-volume-hebrew-bible-second-estienne-hebrew-bible